When people think about Hong Kong food, they often think of the Americanised Chinese food like sweet and sour pork. Some people might think fried rice, chow mein, or Dim Sum. In reality, Hong Kong food is a fusion of many cuisines with an Hong Kong twist. In this post, I will try to introduce as much Hong Kong food as I can!

Hong Kong breakfast is what I crave, and a lot of it is simple enough to make at home without too much effort with the exception of Dim Sum. 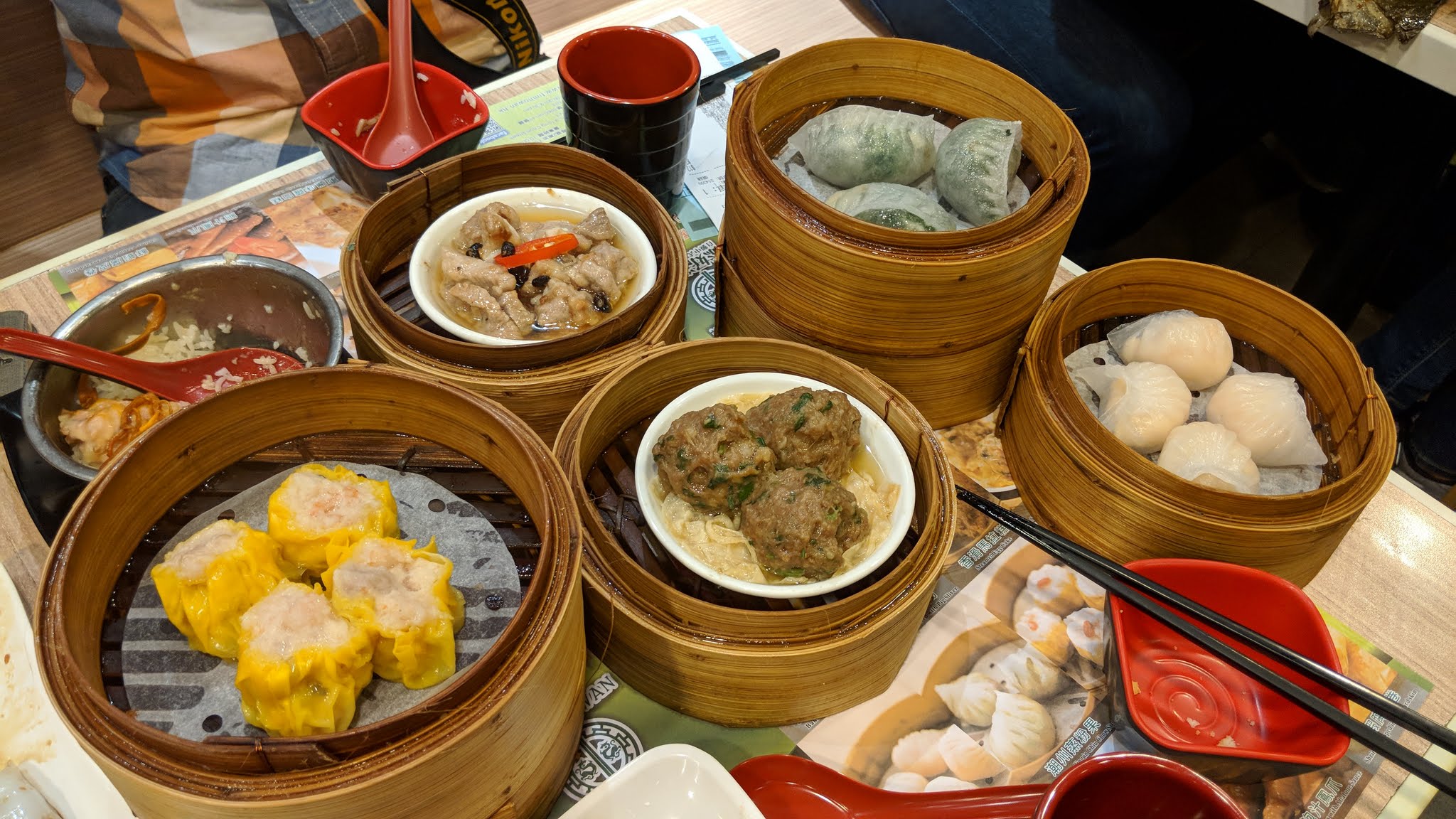 These are all Dim Sum dishes, typically cooked by steaming. On the bottom left, there is Shaomai, which is a dumpling containing pork and shrimp. This particular variety is what is most well known in English speaking countries, and actually has its roots in Inner Mongolia. Clockwise (ignoring the half eaten dish) is steamed ribs in black bean sauce. Top right is either a Chiu Chow dumpling or a chive dumpling, but they are both similar in that they both contain vegetables, fungus, and sometimes pork. Bottom right is a shrimp dumpling. Bottom middle is a steamed meatball. It contains beef and water chestnut and other seasonings and is served with Worcestershire sauce. 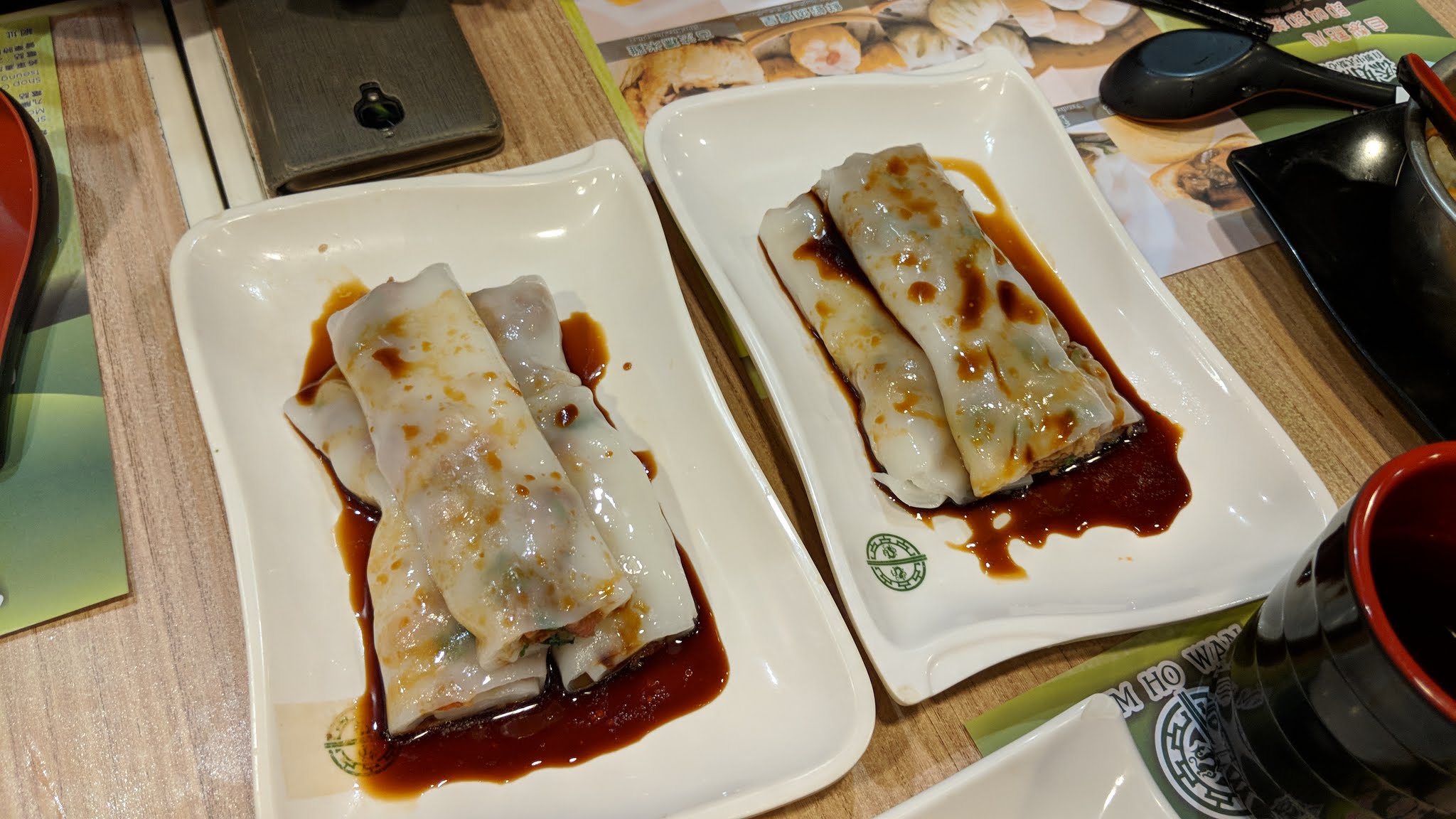 Another classic in Dim Sum – this are steamed rice rolls. The white part is made of a wide strip of rice noodle usually with filling from shrimp, pork, or beef, and the sauce on top is soy sauce. 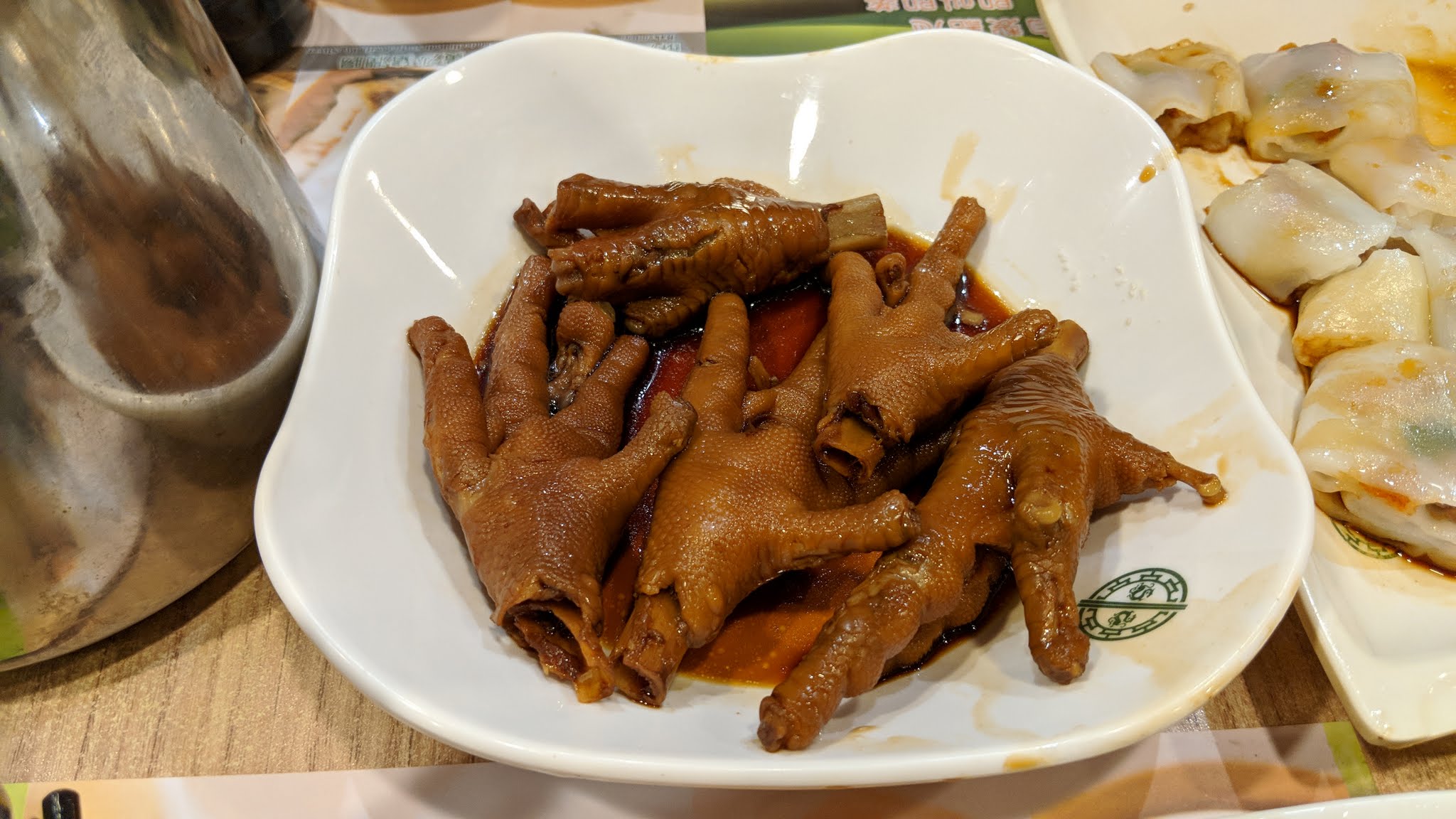 The sight of chicken feet as something edible frequently scares foreigners. Rather than just calling it chicken feet, it’s commonly known as Phoenix Claw. It’s prepared via a complicated process of frying, braising, simmering, and steaming – one of the most difficult Dim Sum dishes to make. 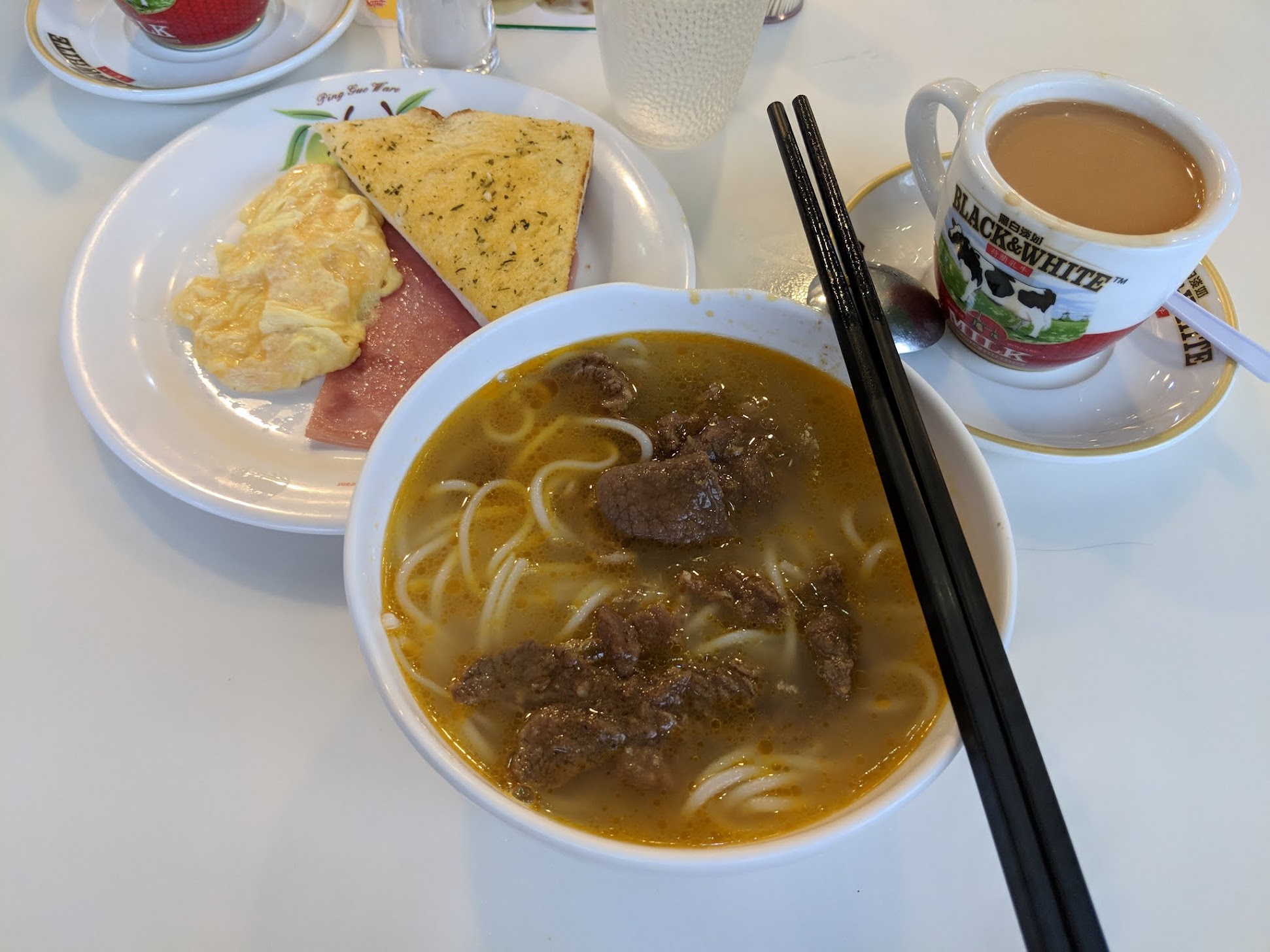 The top left is the usual eggs, ham, and bread (in this case garlic bread).  The middle is Satay Beef Noodles.  Satay refers to cooking meat with a spicy, sweet, peanut sauce that originated from Indonesia.  The noodles in the picture are just rice noodles, but it doesn’t have to be.  The top right drink is Hong Kong style milk tea.  It’s similar to the British style of black tea with milk and sugar except that the Hong Kong variant uses condensed or evaporated milk – I would drink this over coffee any day of the week. 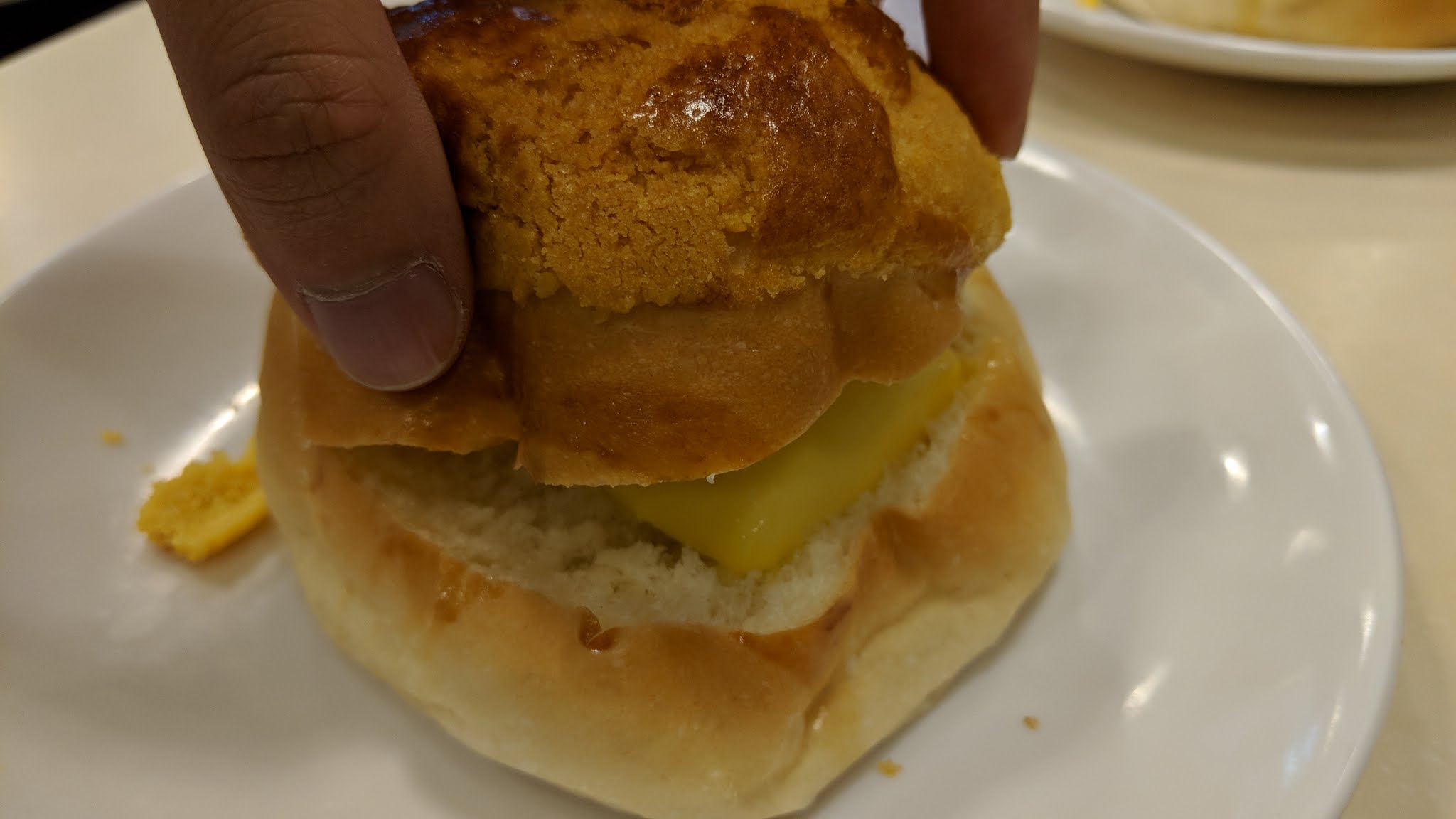 This is a pineapple bun with a slab of butter inside it (the bun is served warm so the butter slowly melts inside of it). The bun doesn’t actually contain pineapple, but it the crunchy top can sometimes resemble a pineapple. The bun itself tastes like a regular bun, but the top adds a slight sweet flavour, and of course there’s the flavour of melted butter. 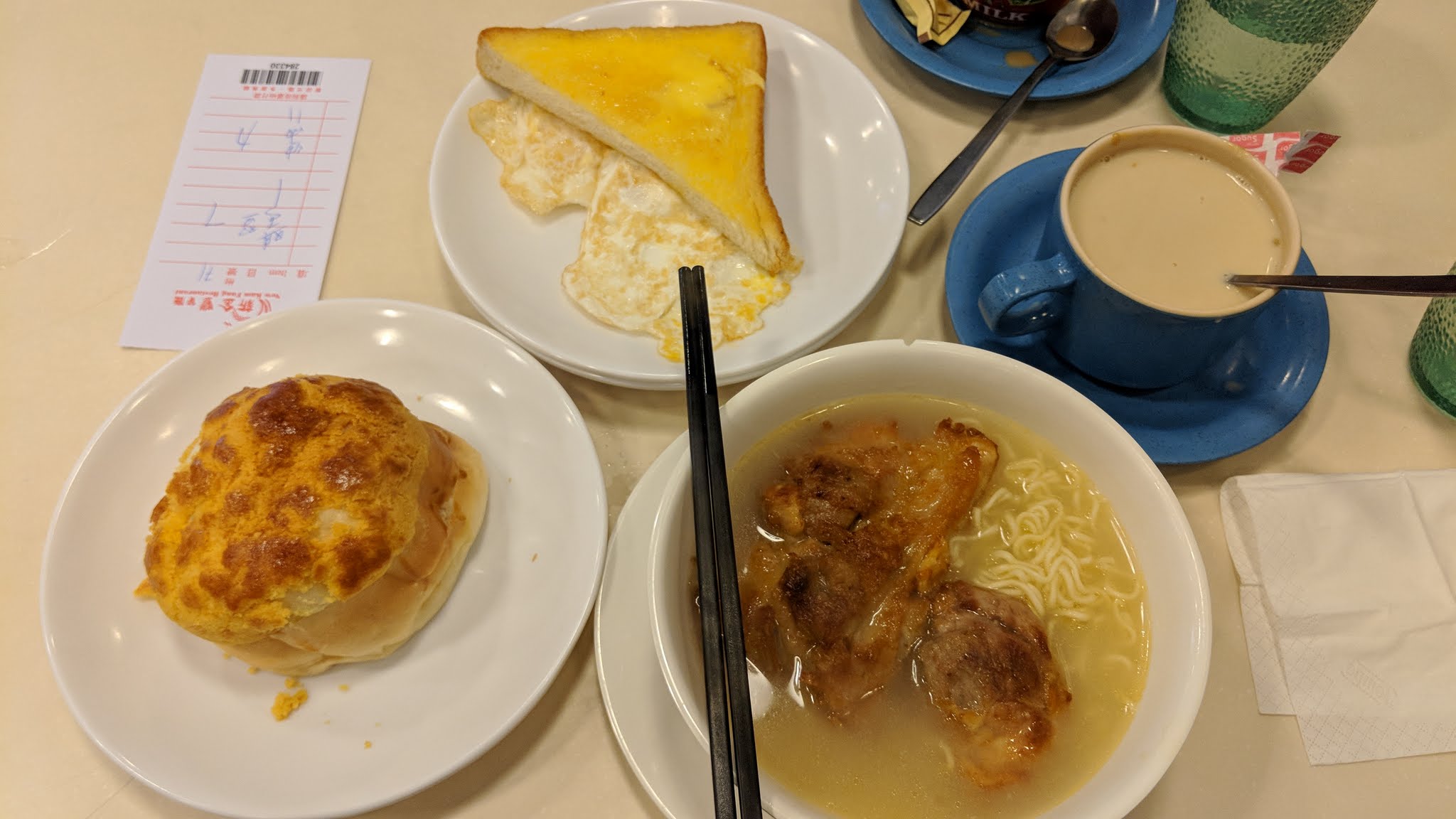 The bowl of noodles is just regular instant ramen noodles (typically Nissin 出前一丁 noodles) in the restaurant’s own soup with a deboned chicken drumstick. This dish is often served with fried eggs and Spam instead of chicken.  The drink to the right is Horlicks, a malted milk drink. It’s often associated as a kid’s drink, but still enjoyed by adults. 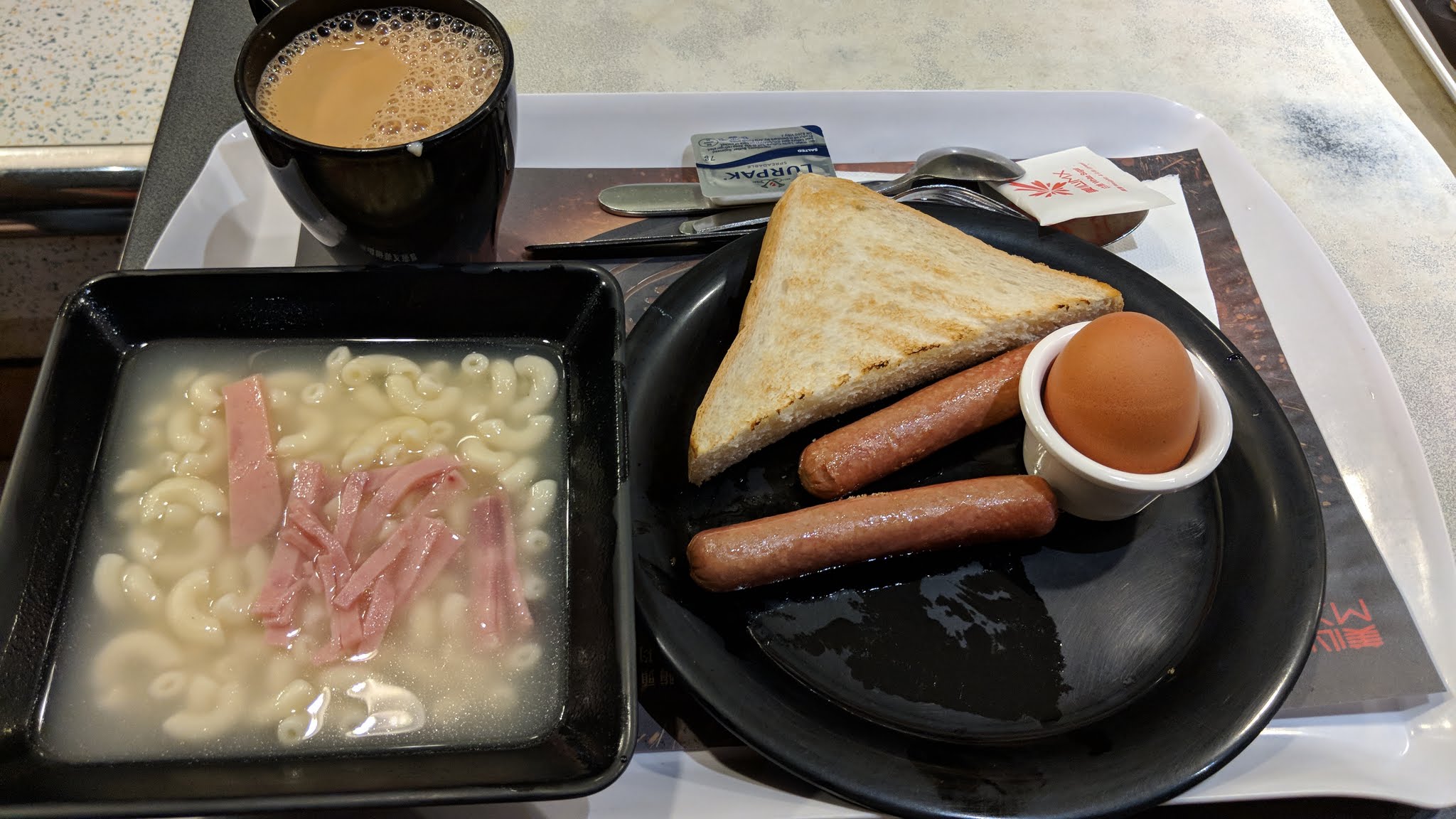 The dish on the left is macaroni in chicken broth with ham slices. I ate this a lot growing up and for some strange reason a lot of non-Asian people I’ve explained this dish to think it’s gross. The dish on the right is the typical egg, sausage, and toast, and the drink up top is milk tea. 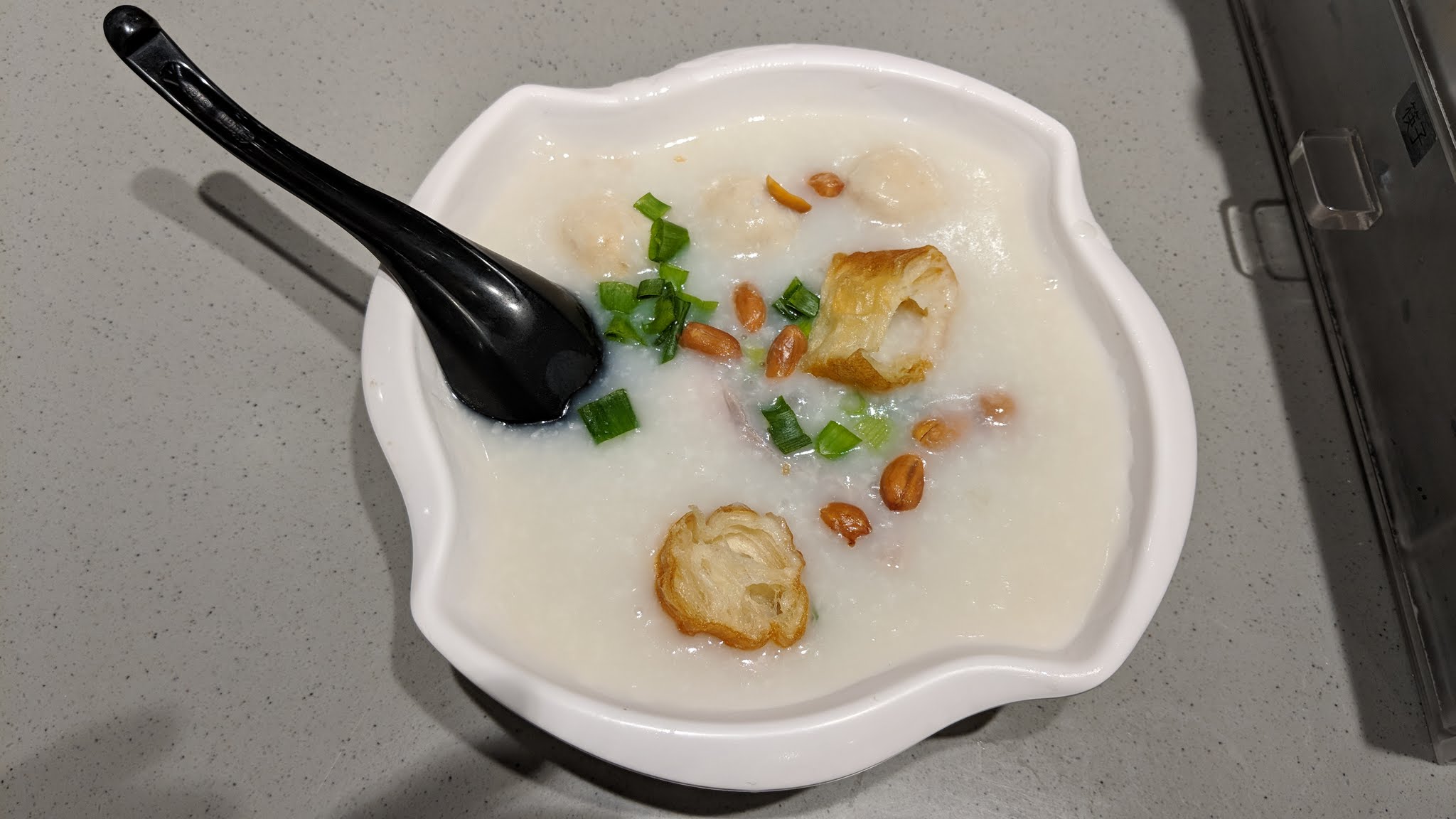 Congee is a popular breakfast dish and it’s common to add all sorts of different ingredients like fish, chicken, pork, Chinese doughnut, etc. The one above is congee with Chinese doughnut, fish balls, beef balls, and peanuts. Another popular one has lean pork and century egg.

Food is cheap enough in Hong Kong such that people are okay with buying food everyday rather than cooking at home! 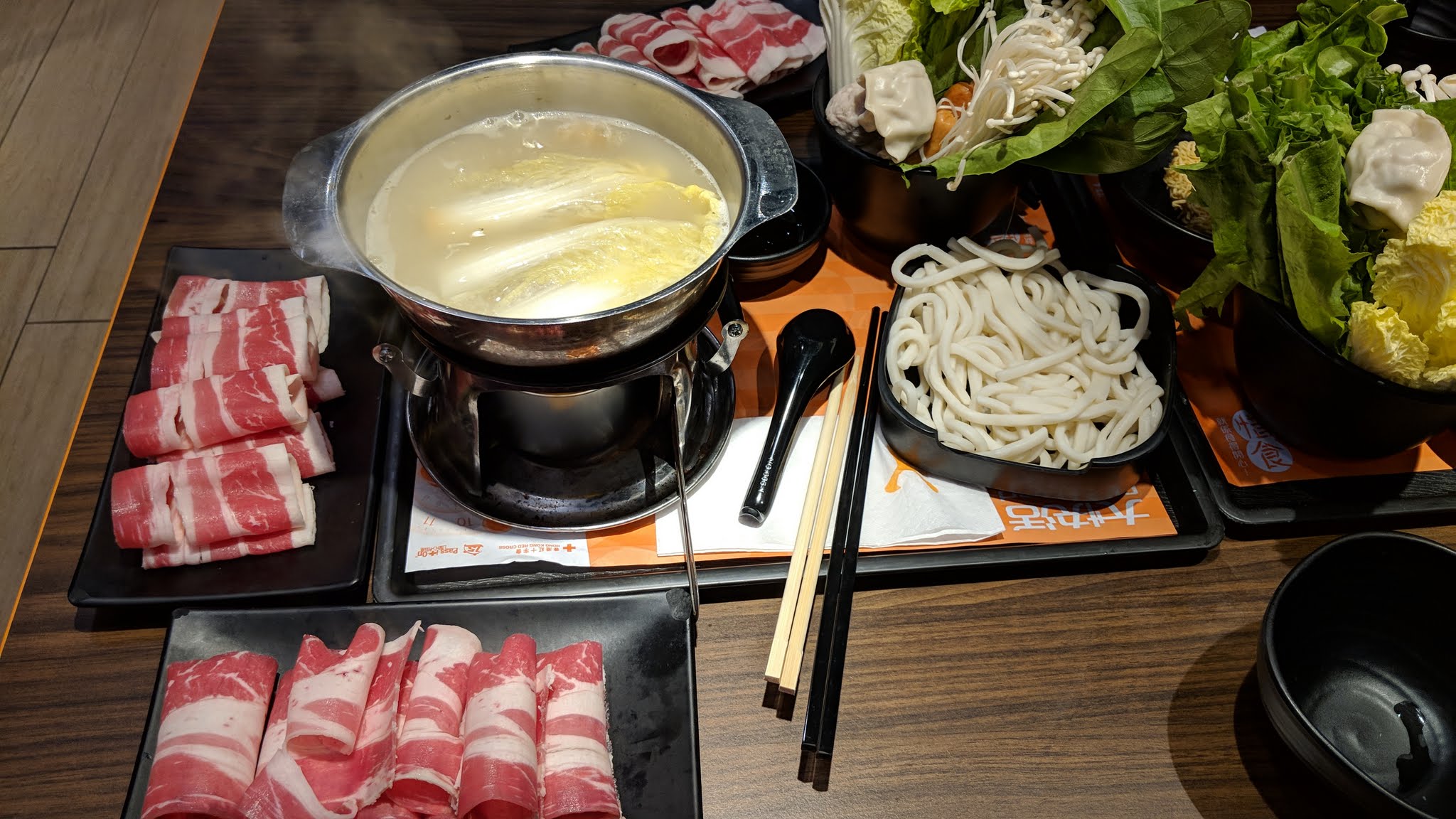 Hotpot is probably my favourite. Take a broth (beef, chicken, fish, spicy, or whatever) and just cook whatever you want inside it. Traditionally, the entire table all share one giant pot and everyone cooks their food inside it, but in recent times, having one small hotpot per person is becoming more popular. 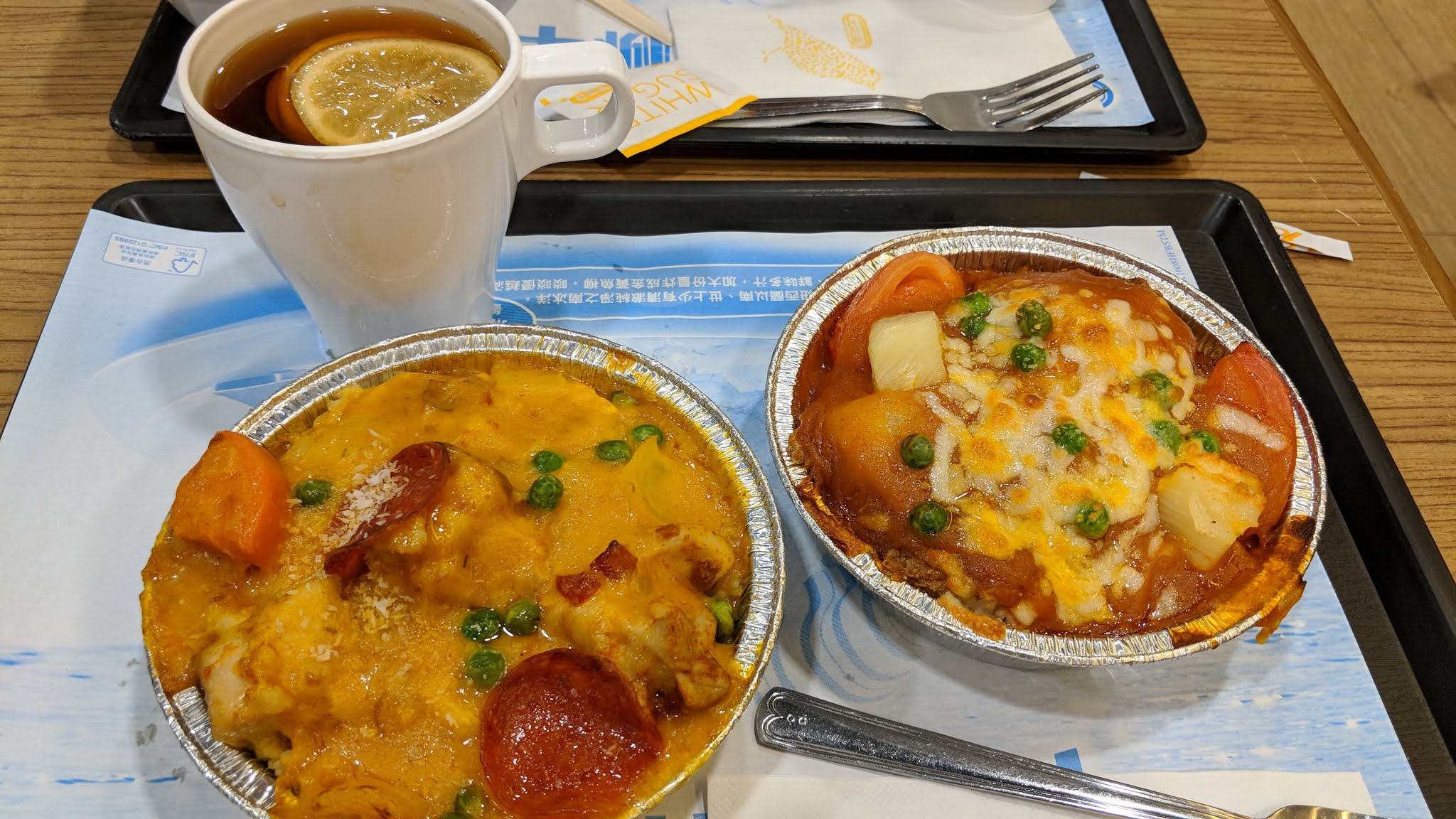 These two dishes are classics in Hong Kong “Cha Chaan Teng” (茶餐廳) establishments. The one on the left is Baked Portuguese Chicken Rice. It’s not actually Portuguese and has its origins in Macau (just a ferry ride away from Hong Kong!), which was a Portuguese colony at the time. It’s essentially chicken and potatoes on top of fried rice in a creamy sauce with spices (e.g. turmeric, cumin, etc.), coconut milk, and chicken broth. The one on the right is Baked Pork Chop Rice. It’s baked in the same way as the previous one, but it’s fried pork chop and tomatoes on rice with a slightly sweet, cheesy, tomato sauce – one of my favourites. The drink is a lemon tea, which in this case it’s black tea with lemon slices and sugar. 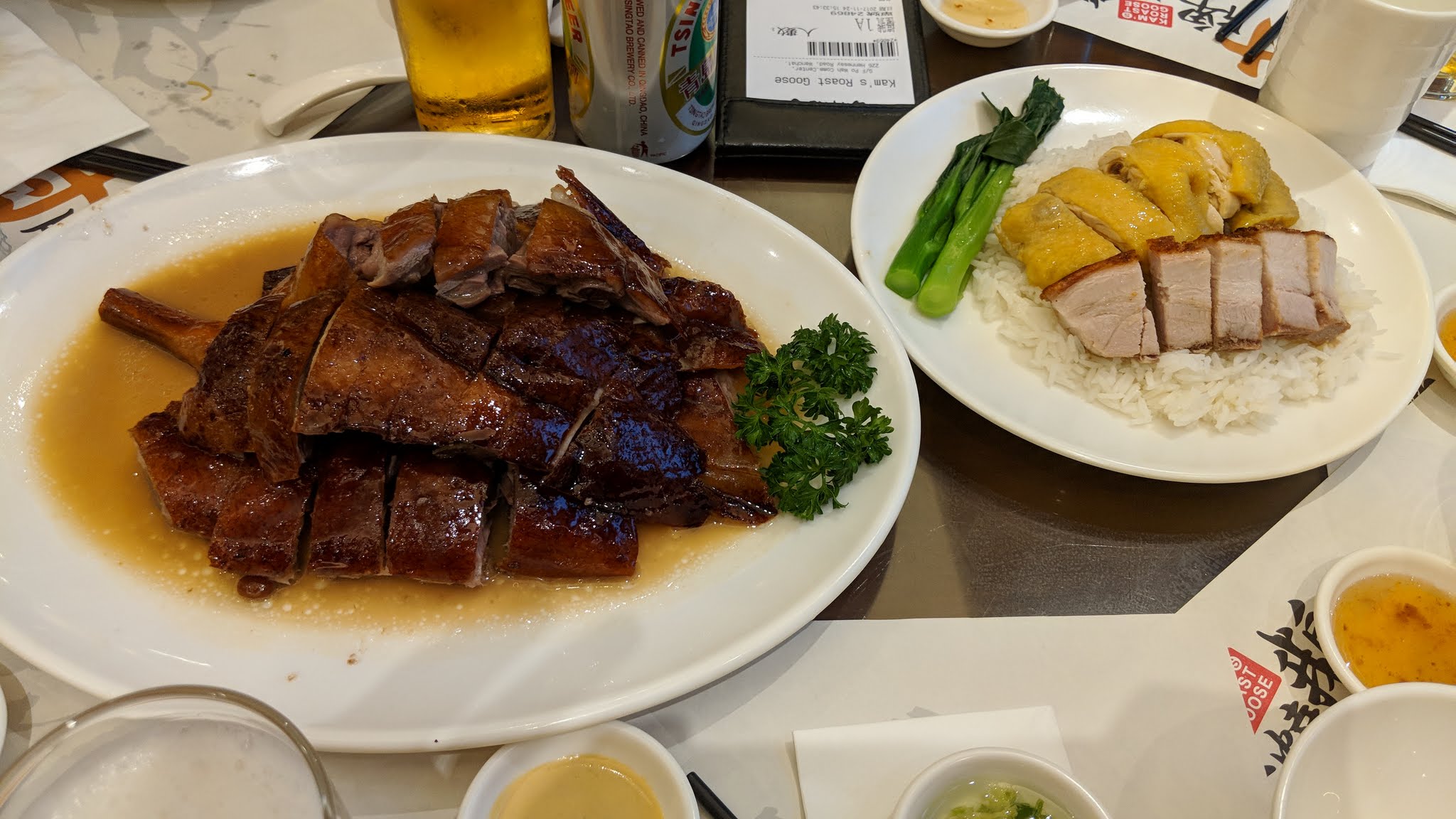 The dish on the left is a roasted goose. It has the consistency of chicken, but has all dark meat and a more intense flavour than chicken. The dish on the right is poached chicken and roast pork belly on rice. Poached chicken might sound strange to some people, but it is actually quite flavourful if the brine is made well and the chicken is of high quality. The poached chicken is typically eaten with a sauce made of minced green onion, ginger, and oil. Roast pork belly is special mainly because of its thick crusty skin. 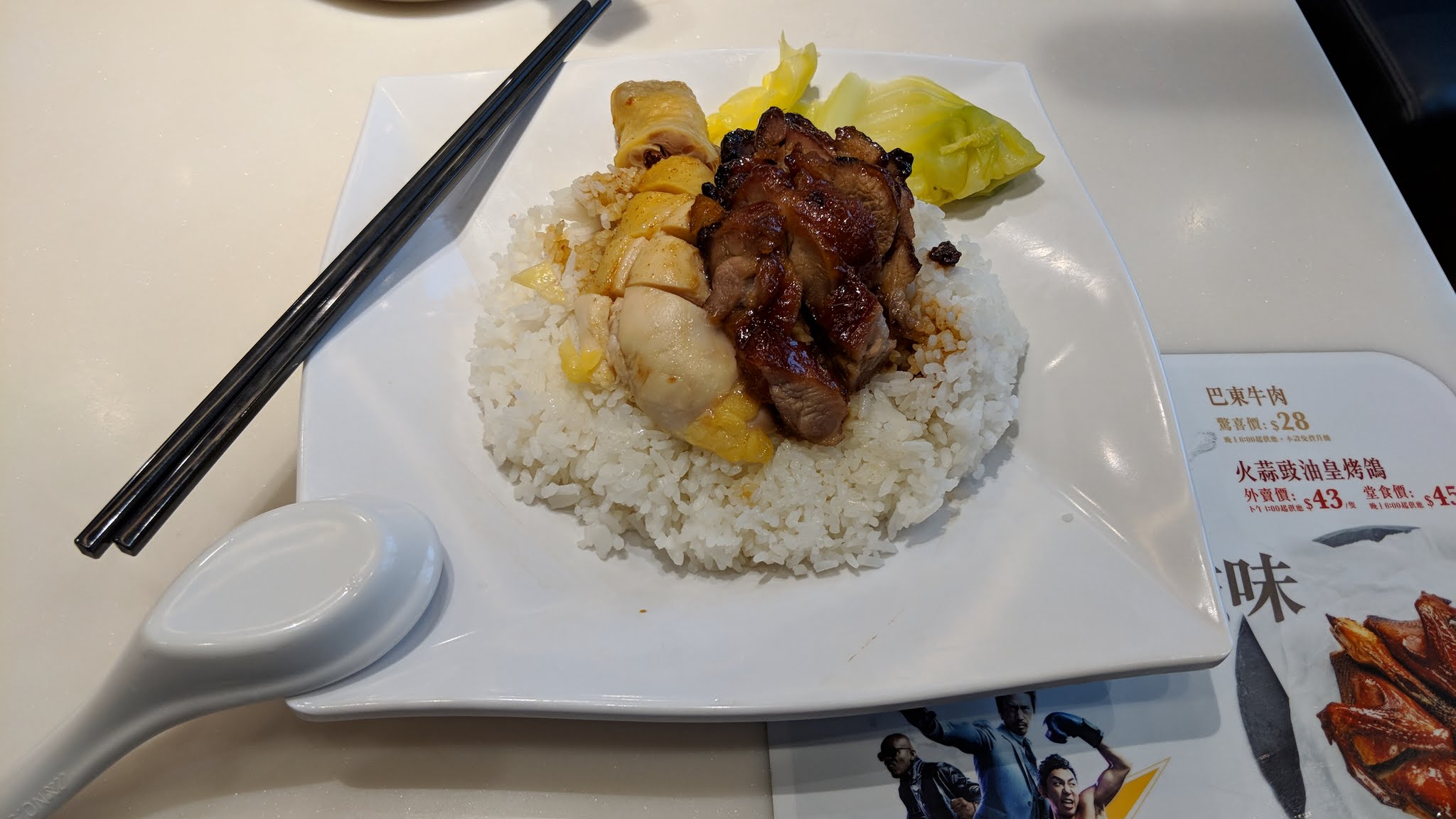 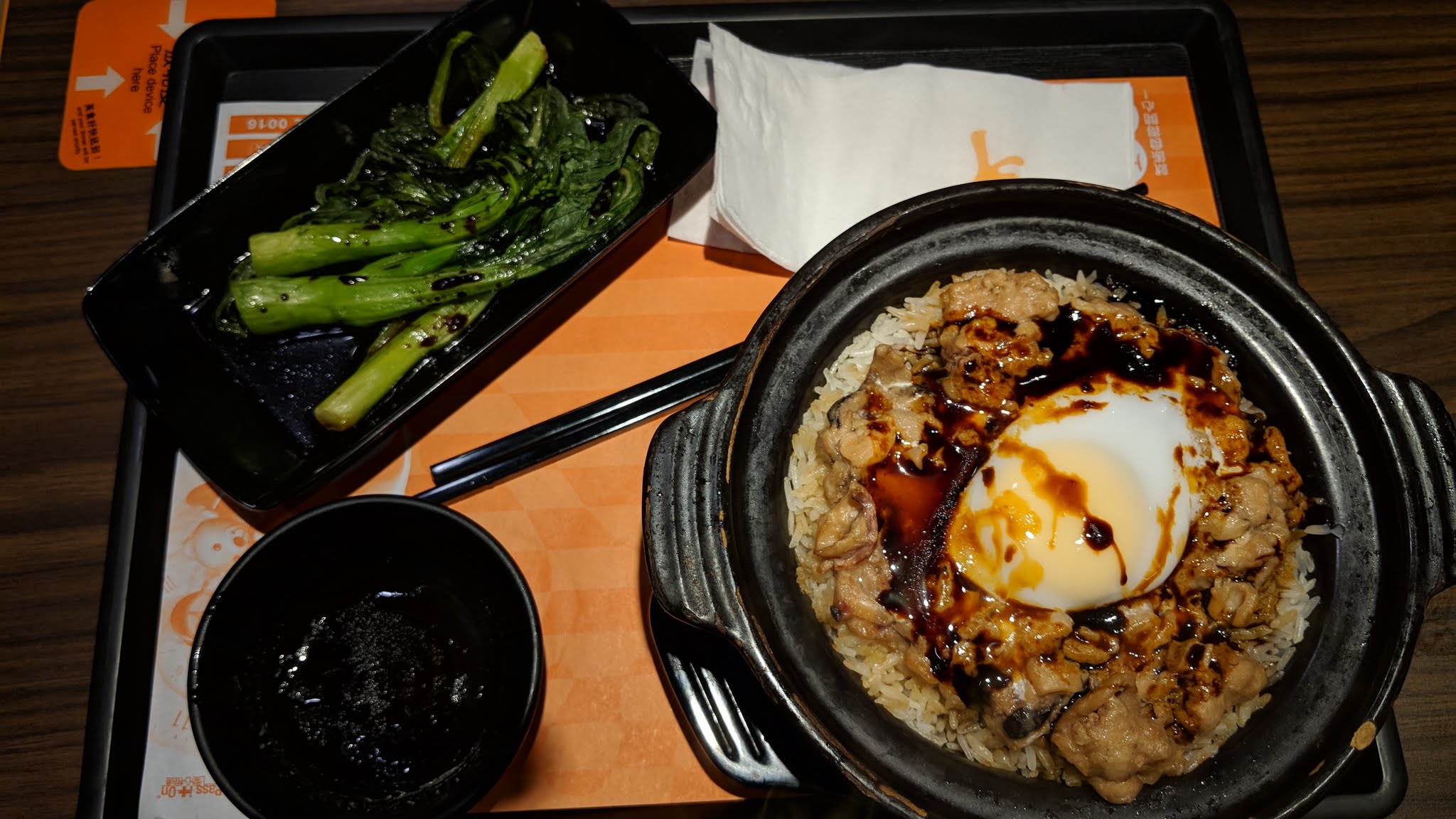 This is Claypot Rice. It’s essentially rice, meat, and soy sauce among other things all steamed together, but it doesn’t count unless there are crusty bits of rice on the side of the bowl formed from the steaming. 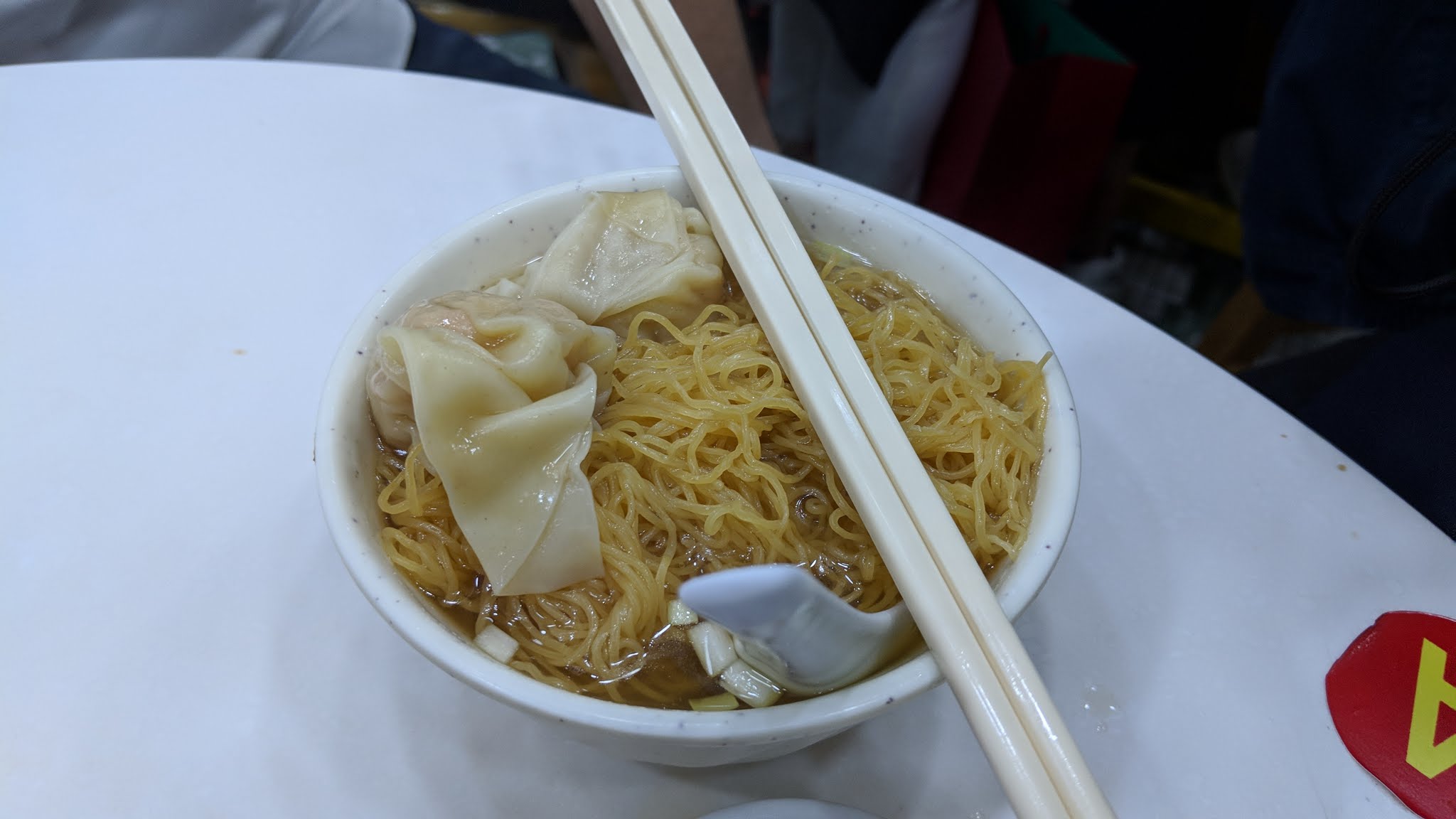 This is Wonton Noodles. The Wonton is the dumpling with shrimp and vegetables (one could argue that the above isn’t an actual wonton due to the shape of the dumpling, but let’s not get into technicalities), the noodles themselves are egg noodles cooked al dente, and the soup is usually derived from fish. The soup itself has flavour, but not so much so that it doesn’t overpower everything else. 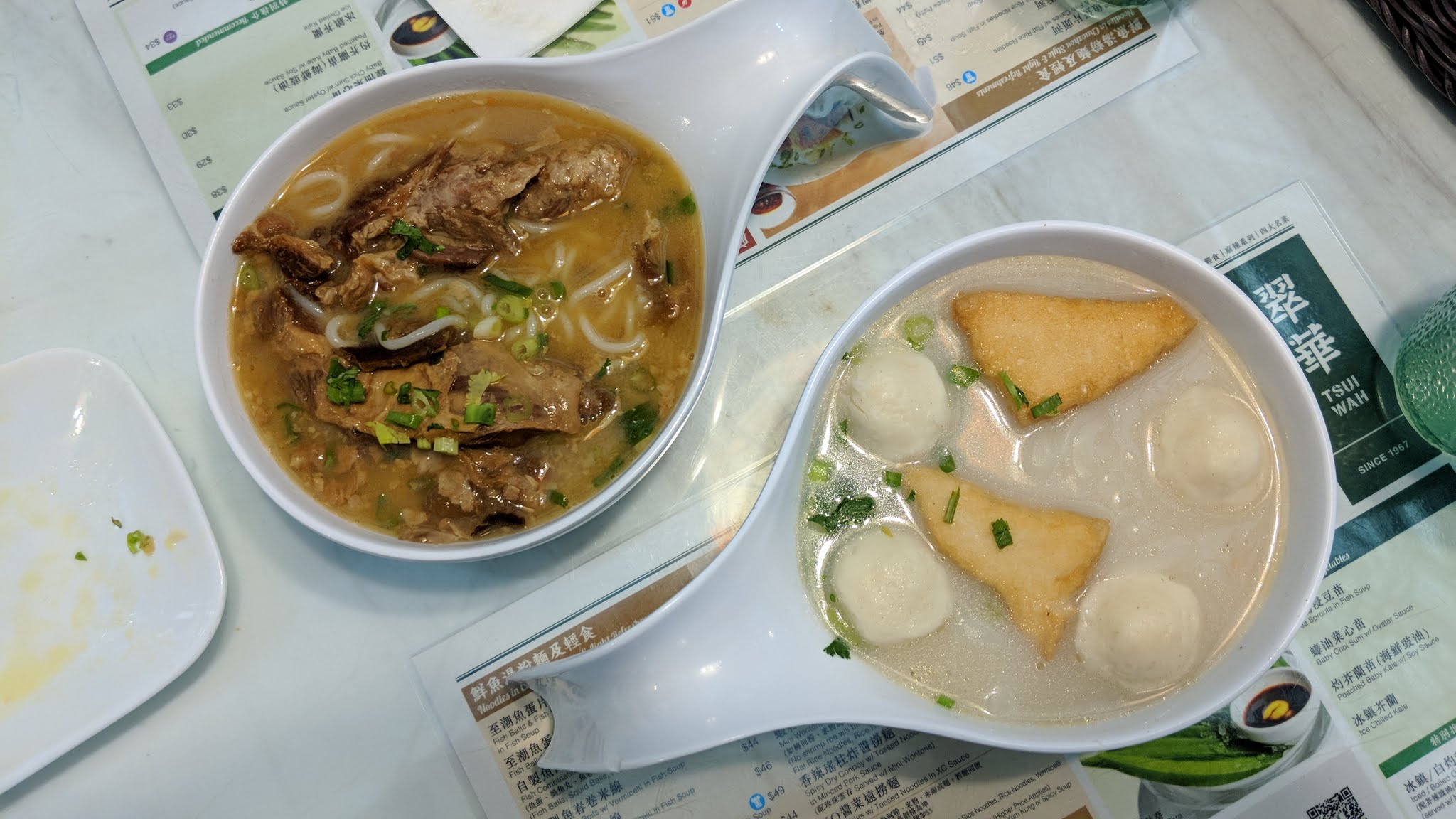 These are also typical noodle dishes. The one of the left is beef brisket in a beef soup and the other is fish balls and fish tofu in a fish soup. 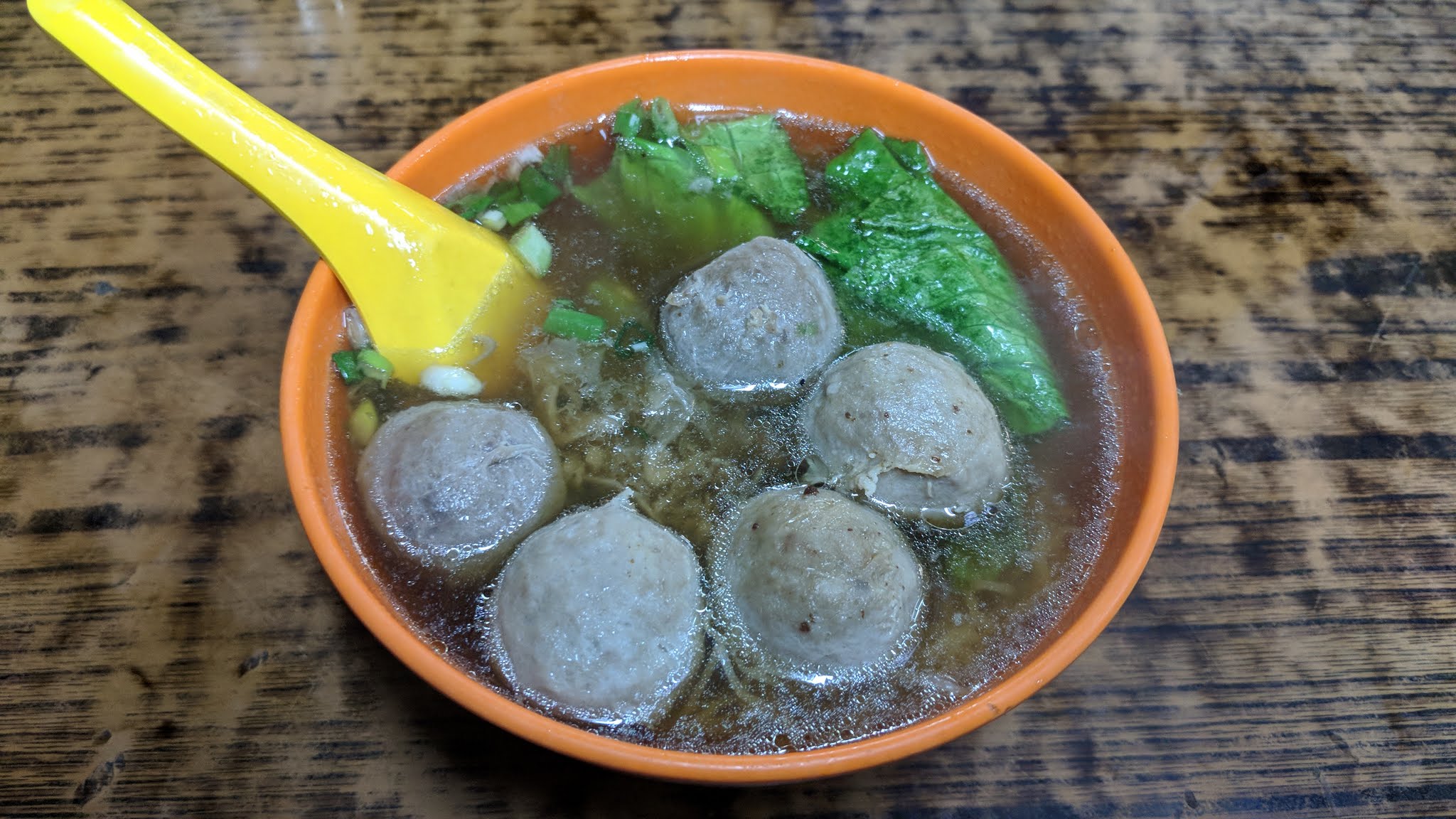 This is wonton noodles with beef balls. Good for a quick meal. 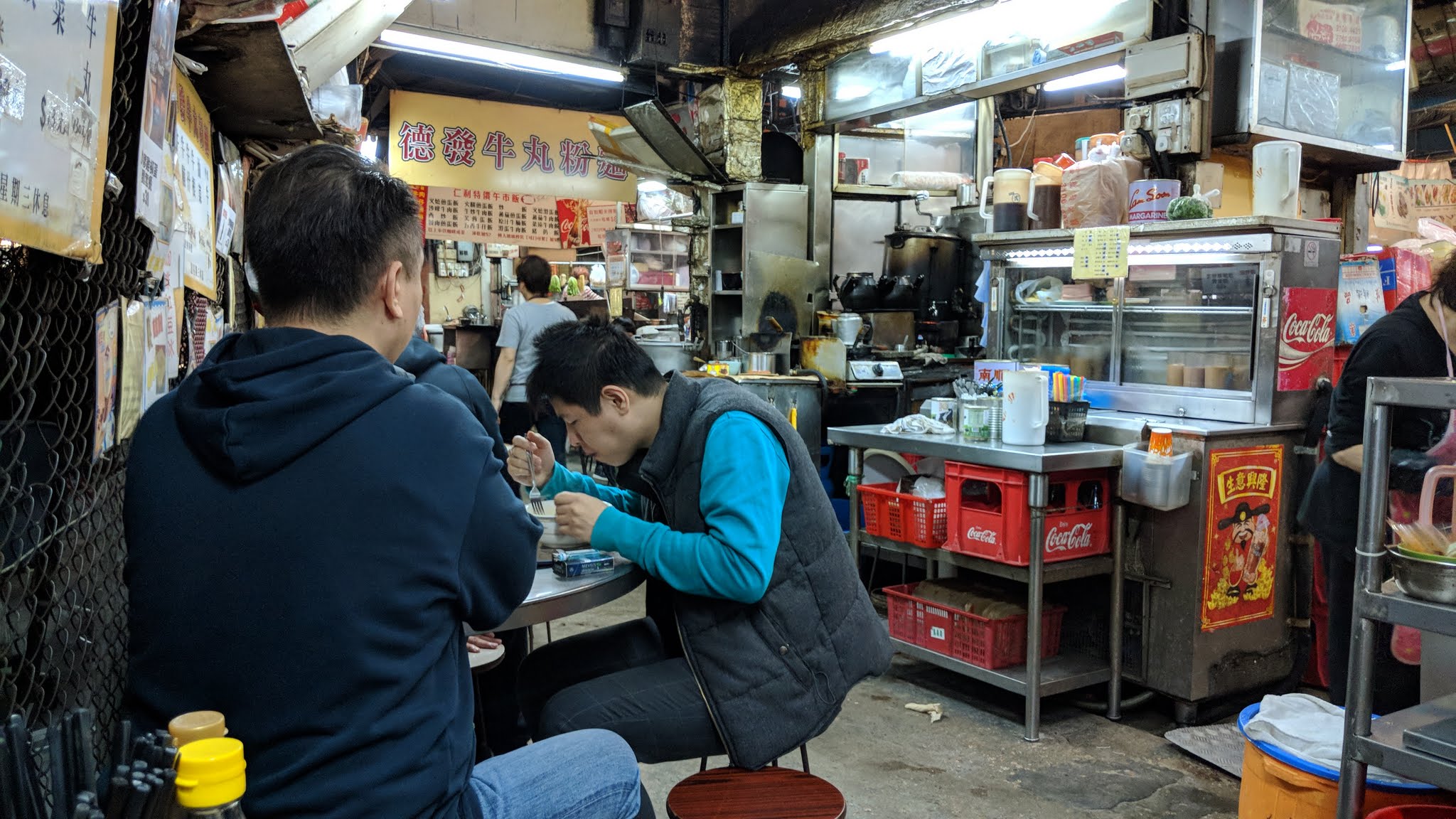 Some might tell you that the dirtier the place looks, the tastier it is.

These are the street food style snacks. Huge ones that I’m missing here are bubble waffles and egg tarts unfortunately! 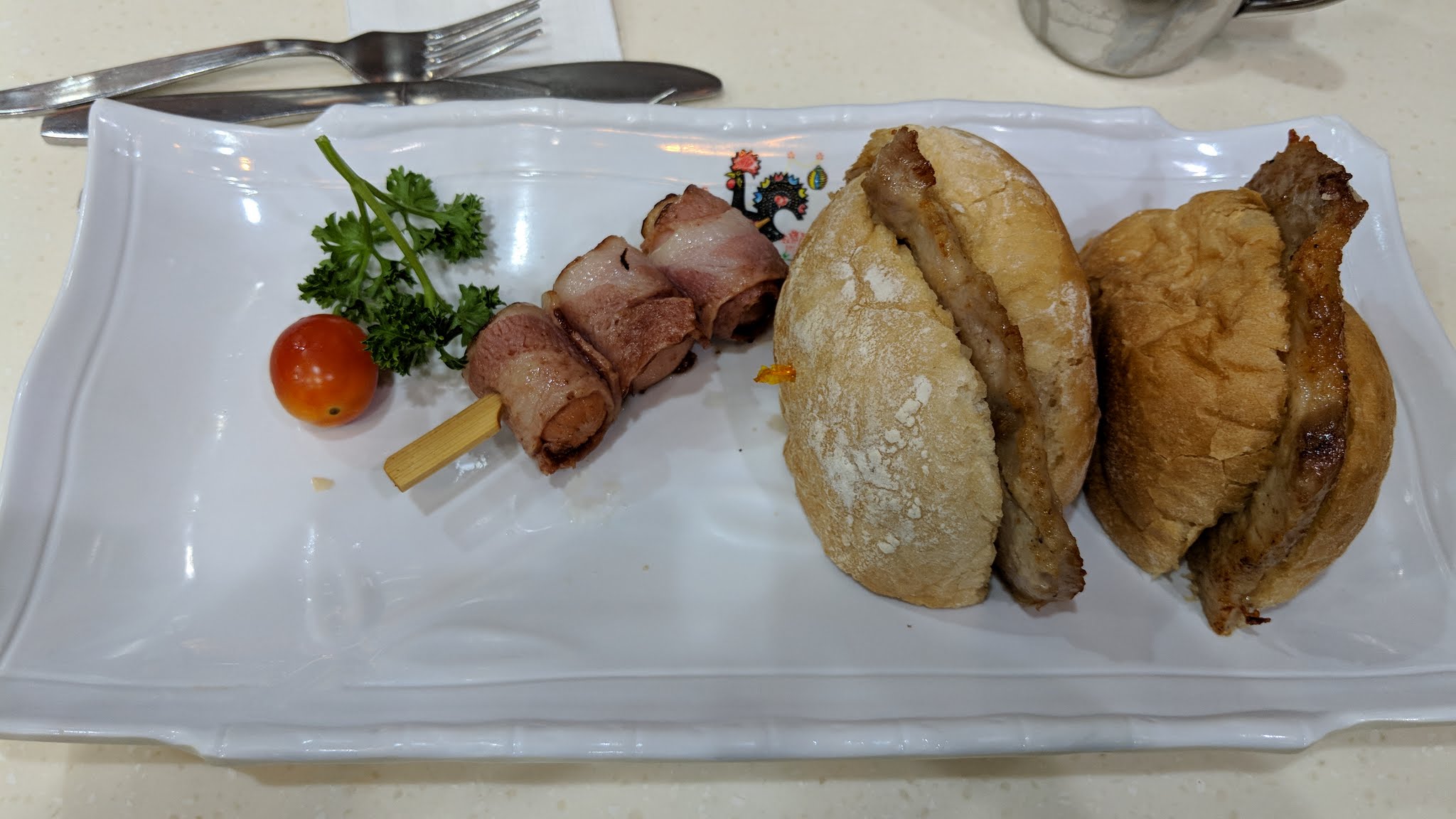 The bun on the right is the Pork Chop Bun, originally from Macau. It’s essentially a pork chop sandwiched in a Brazilian style bun (so-called piggy bun). 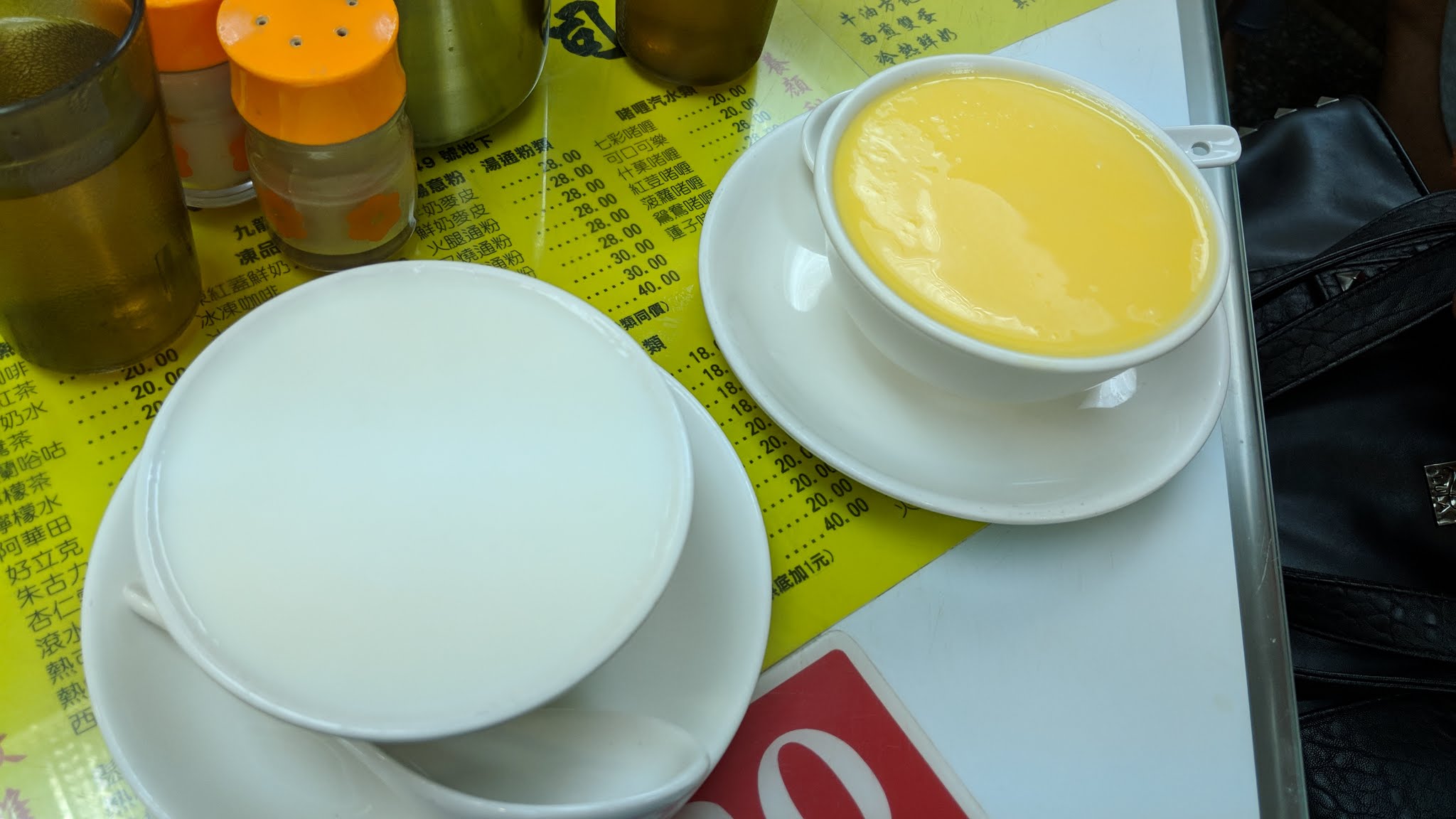 This looks like a dessert, but it’s actually served at some Cha Chaan Tengs. The white one is steamed milk pudding and the yellow one is steamed egg custard. It’s essentially milk or eggs with sweet flavouring (e.g. sugar, vanilla extract, etc.) that is steamed. It’s almost like a Hong Kong style crème brûlée. 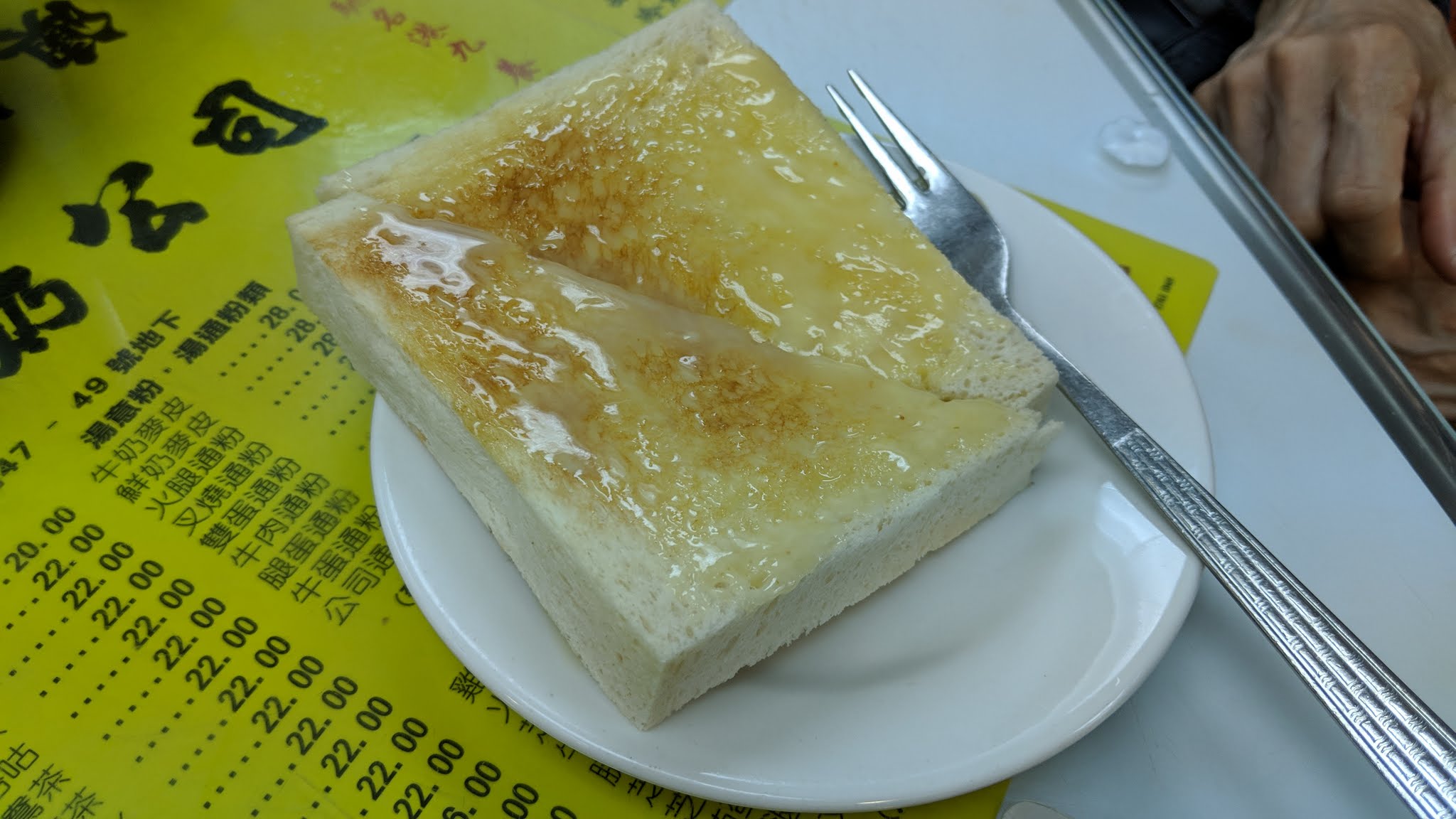 This toast with butter and condensed milk. Very simple, but also very delicious. 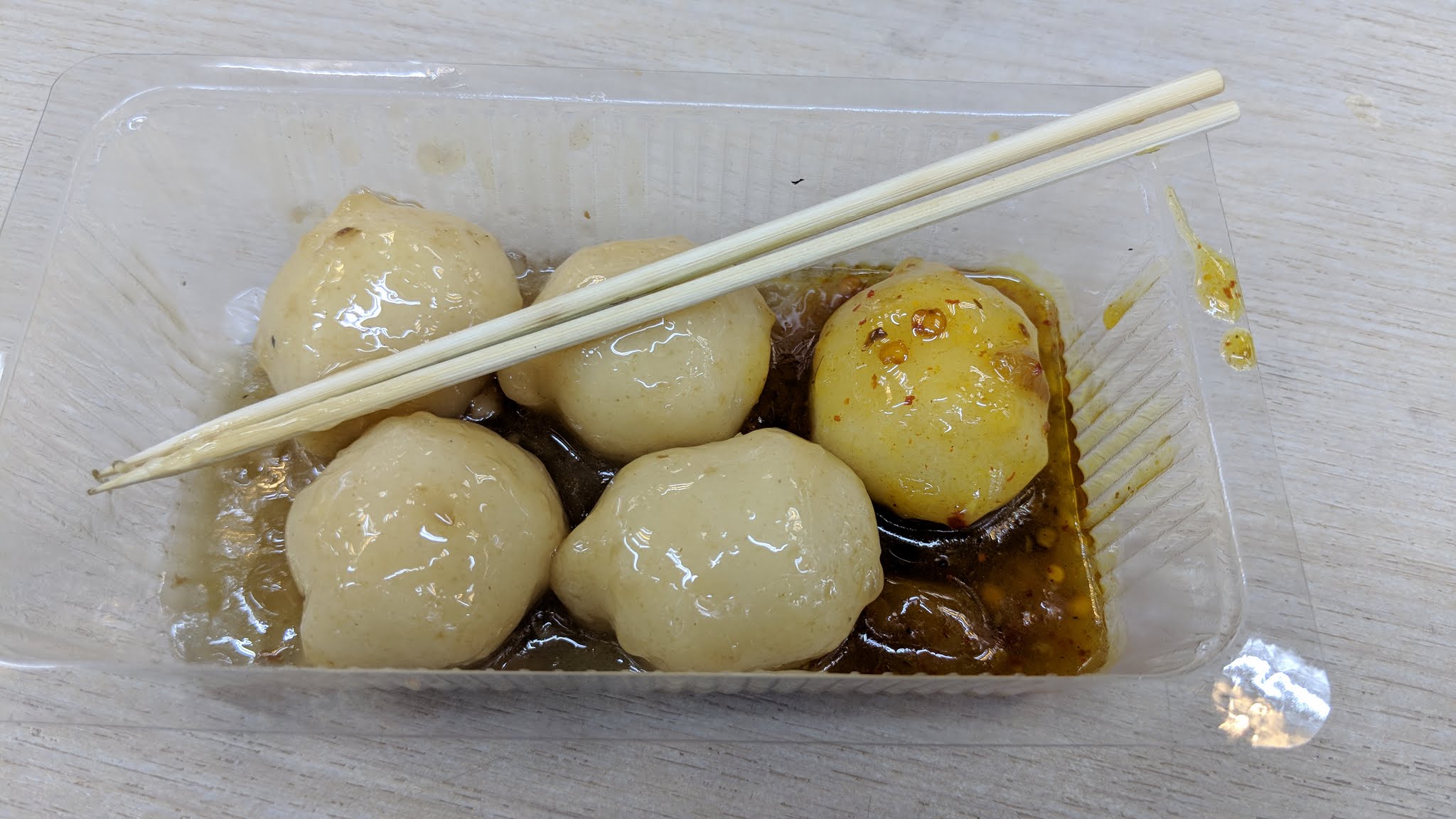 These are fish balls. A lot of times they are made from processed fish, but can be made from fresh fish as well. Generally they are served a curry sauce, but they are also available in other types of sauces for people who can’t handle the spice. 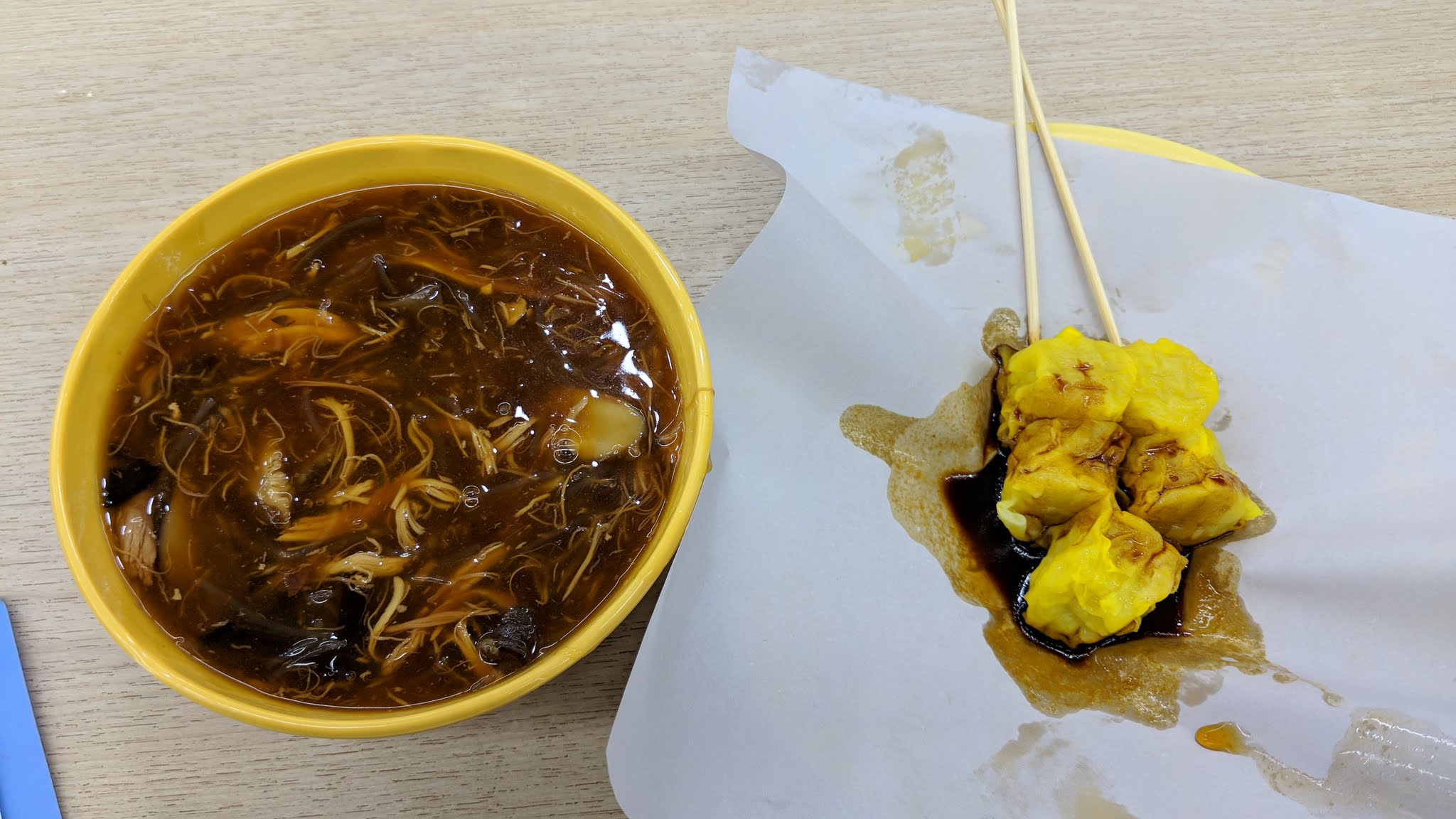 The bowl of soup on the left is Imitation Shark Fin Soup. This has no actual shark fin in it, and instead the shark fin is replaced by clear rice noodles, since actual shark fin can sometimes have a similar consistency to it (to be honest, actual shark fin is rather tasteless). The key ingredients in the soup itself is chicken stock, chicken, various types of fungus, and dried scallops, and soy sauce. The dish on the right is Shaomai. Not to be confused with the kind at Dim Sum – this is the street food version, which is made of similar ingredients as the fish balls above.