Spontaneous Trip to Guadalajara and the Liga MX Finals

My Mexican friend, who is an almost fanatical fan of the Guadalajara Chivas football team in Mexico and who also grew up in Guadalajara, asked me, “there’s a good chance that the Chivas will make it into the finals this year. If they do, I’m going to go back to Guadalajara and go to the game. Wanna come?” I replied back, “OK let’s do it”. Three weeks go by and my friend says, “so the Chivas made it into the final!” We bought our plane tickets and flew out two days later. We didn’t even have tickets to the game yet. An American friend of ours even bought his tickets to fly to Guadalajara even before the guy who is actually from there.

Alright, now let’s get the tickets for the game

“Don’t worry about the tickets for the game”, my friend said. Next thing we know, the tickets were all sold out to season ticket holders. Our other friend found some tickets on viagogo, BUT, we didn’t know if they were fake. We needed a new plan. “It’s OK, we can buy tickets off scalpers on the black market”, my friend says. The black market sounded all well and good until the news reported armed robberies occurring where scalpers were robbed of their legitimate tickets which were now worth a couple hundred US dollars, a value that is a large chunk of a typical local’s monthly salary. We could now only rely on the viagogo tickets being legitimate. Then there is me, the clueless foreigner in his country and doesn’t speak any Spanish, who can only helplessly watch events unfold without knowing at all how to help.

In our already not-so-good situation, a representative from viagogo calls us and said that the tickets can only be picked up at 5pm close to downtown. The problem was that the stadium is on the edge of the city and the game starts at 6pm. There was no way to go to the pickup location for the tickets AND get to the game on time because traffic on game day would be terrible. My friend calls the viagogo representative and tells him the situation and guilts him into letting us pick up the tickets earlier by saying how we trusted the company with these tickets and whatnot and the rep agrees to let us pick up the tickets earlier. Whether or not the rep was sincere in that offer we didn’t know. We needed a plan B in case we really had to pick up the tickets at 5pm. This is where our plan got SUPER elaborate. We spent a good hour brainstorming a good plan and this is what we came up with:

The guy who bought the tickets (the American), would have to ride a motorcycle to the ticket pickup location, pick up the tickets, and go to the stadium, while the rest of us would get to the stadium early with a van so that when the bike arrived with the tickets, we could hide the bike inside the van. When his dad heard the plan, he began to scold him saying how crazy it was, and in his scolding, I heard a word come up over and over again. When I looked it up, I found out it was profanity. Awesome! My Mexican friend called all of his connections that he had to see how we’d get our hands on a van and a motorcycle. According to him, “he knows a lot of people, people owe him favours”. The problem with that plan was that the guy who had the van got into an accident (whether or not that was true, we’ll never know), which suddenly broke our whole plan.

Okay, so what if he rode a bicycle to pick up the tickets? He’d have to ride 12km from the pick up location to the stadium in terrible traffic. Not to mention the person riding the bike isn’t familiar with traffic in Mexico (traffic that does not respect bikers), and that most streets don’t have stop signs or lights. Throw in some lack of sleep – the guy would be flying in that morning in an overnight flight from LA. He was up to the challenge. My Mexican friend summarized the whole plan into a PowerPoint, calling it “the story to be told about this amazing adventure”. We wouldn’t be able to execute this plan until the day of the game. In the meantime, my Mexican friend showed me around.

Lake Chapala is Mexico’s largest freshwater lake, and for whatever reason, there is a substantial population of Canadian and American retirees here. 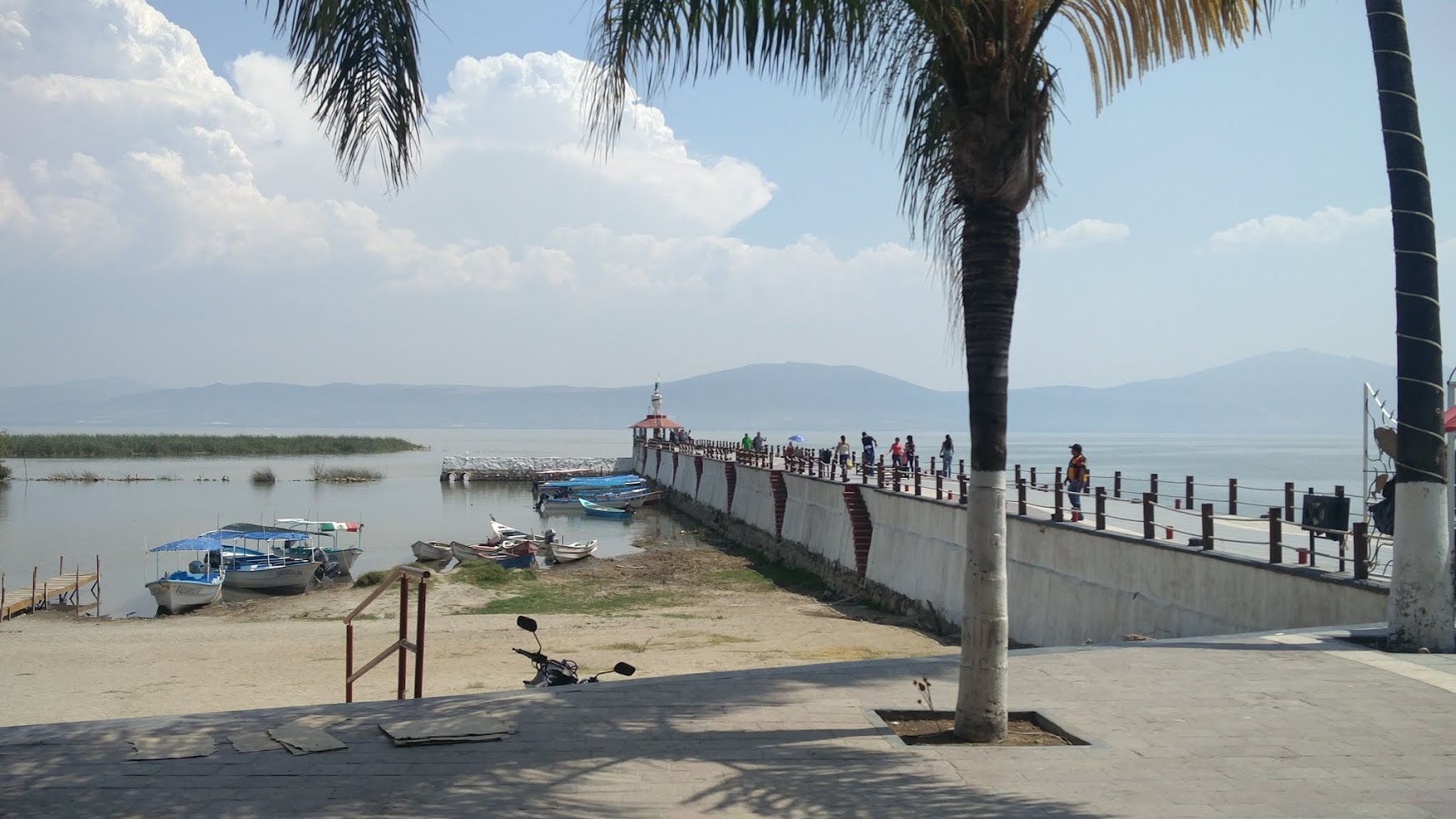 Got to see some Agave fields (and eat some Agave too!) on a tour at the Jose Cuervo Distillery in a town called Tequila (where the name of the alcohol comes from). I made the tour guide speak English because I was the only guy on the tour who didn’t know Spanish. 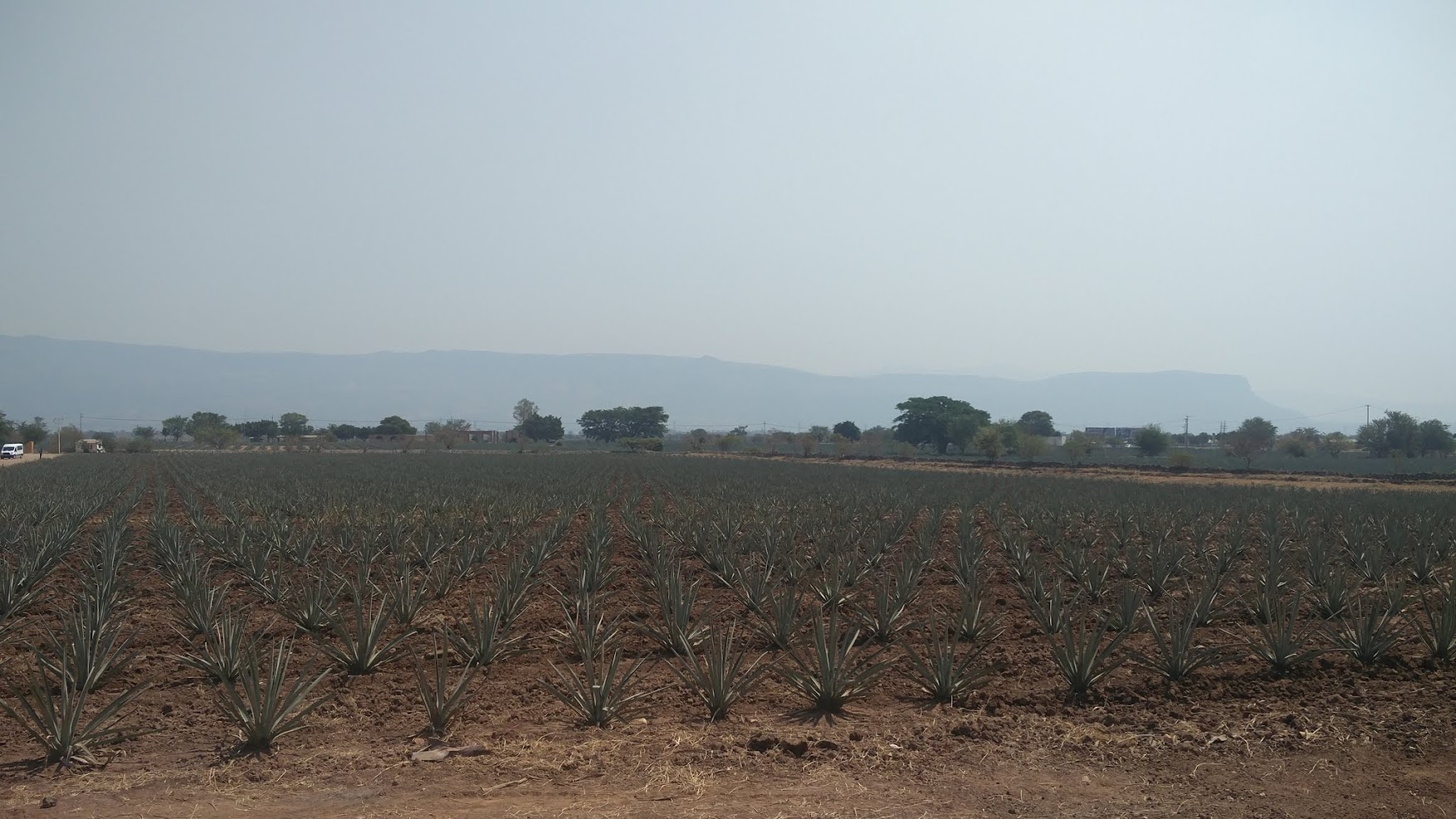 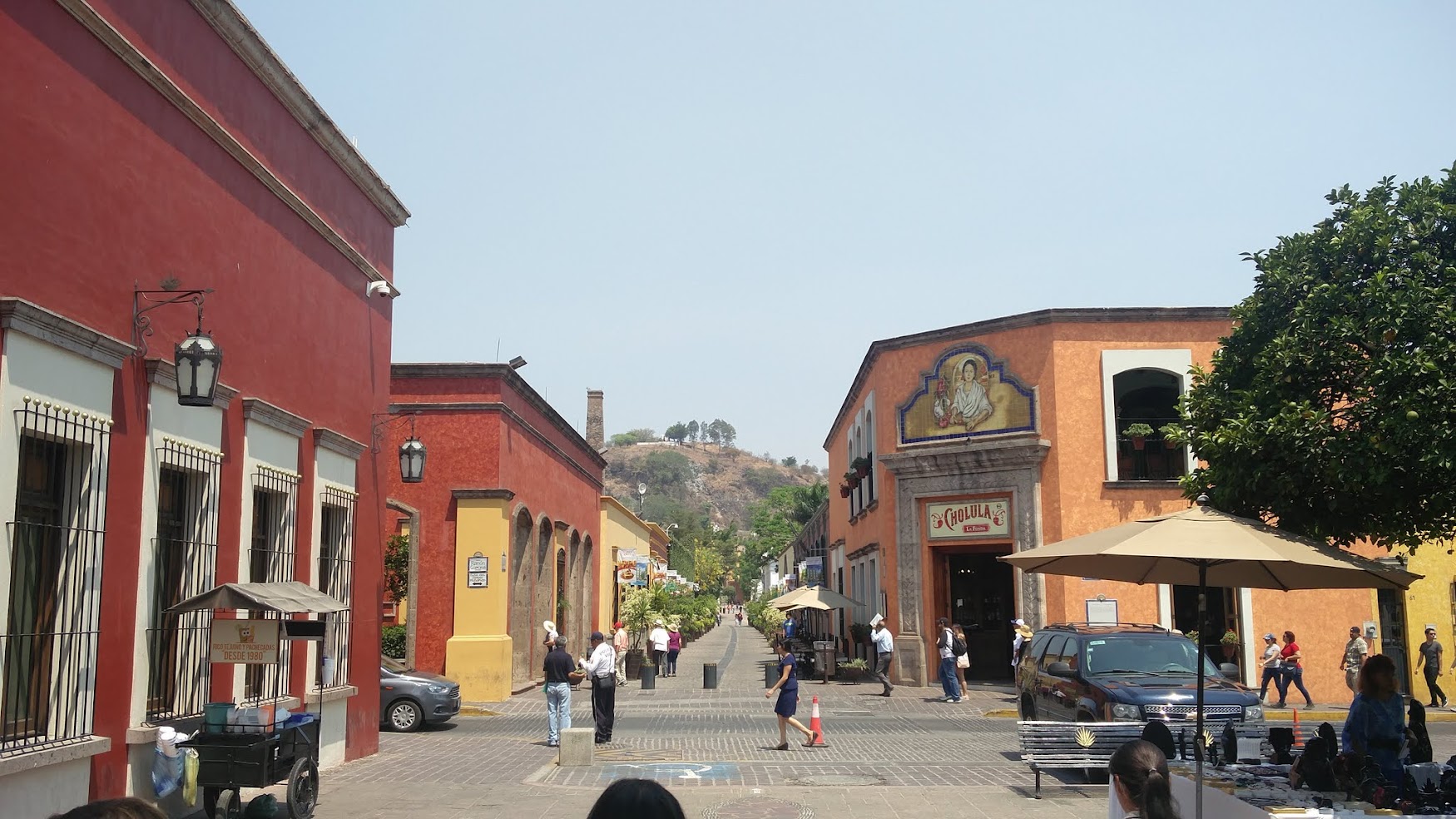 At one point, my friend’s brother asked me if I wanted to drive. I thought to myself, “okay, so there are no stop signs anywhere, I have no idea where to stop, and based on the driving I’ve seen, nobody really follows the rules on the road”. I drove anyway!

Knowing that I was a complete newb on the road in Mexico, my friend and his brother were both very watchful to make sure I was stopping at the right times. They had practically memorized all the places where cars should and shouldn’t stop. I had no clue whatsoever. I stopped and went when they told me to.

Later on, we saw police cars stopped on the side of the street in front of us. My friends just told me to play it cool and just drive normally. I also realized I didn’t have ID on me, so if I had gotten pulled over or something, I would have had to pay $100 USD just to get out. But luckily, nothing happened.

Picking up the tickets

Now it was time to execute the plan. My friend called the Viagogo rep in the morning and he says that we can pick up the tickets at noon. Okay, so no problem. We went and picked up the tickets while in the back of our minds we were still wondering if the tickets are fake. If the tickets were fake, then our whole plan would be meaningless.

We meet the rep and he gives us the tickets. We closely inspect them, and everything looks good. We were in a bit of a disbelief. Everything seemed too easy. But we wouldn’t know if the tickets were real for sure until we actually go to the ticket counter. At this point, we wouldn’t have to execute our crazy bike plan, and could only wait and see when we got to the stadium. With the couple of hours until the game, we spent some time walking around the city center of Guadalajara.

Lots of people out and about on a hot day. We went in May, statistically the hottest time of year in Guadalajara. 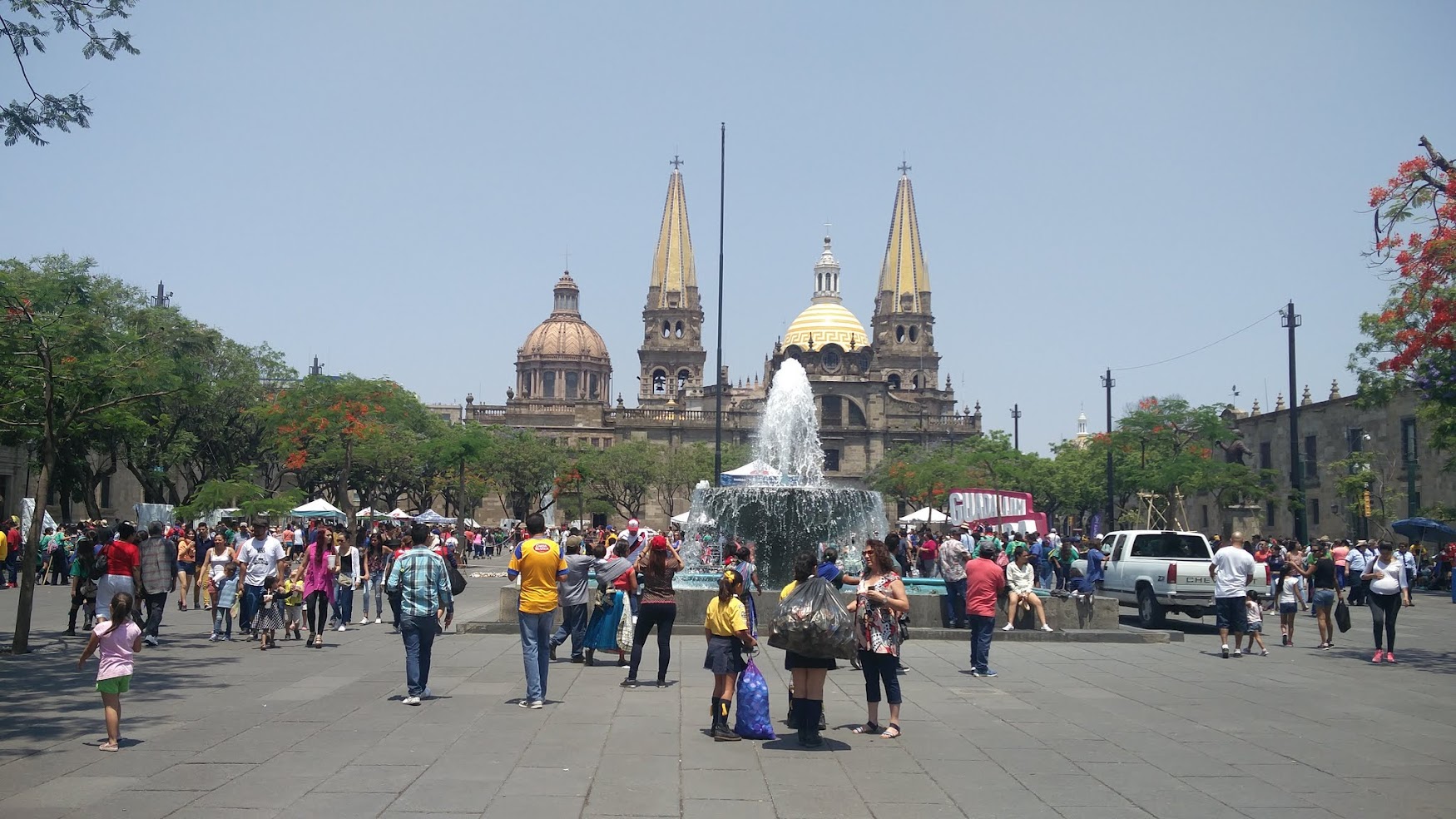 The local boy/girl scouts were running a recycling campaign or something. 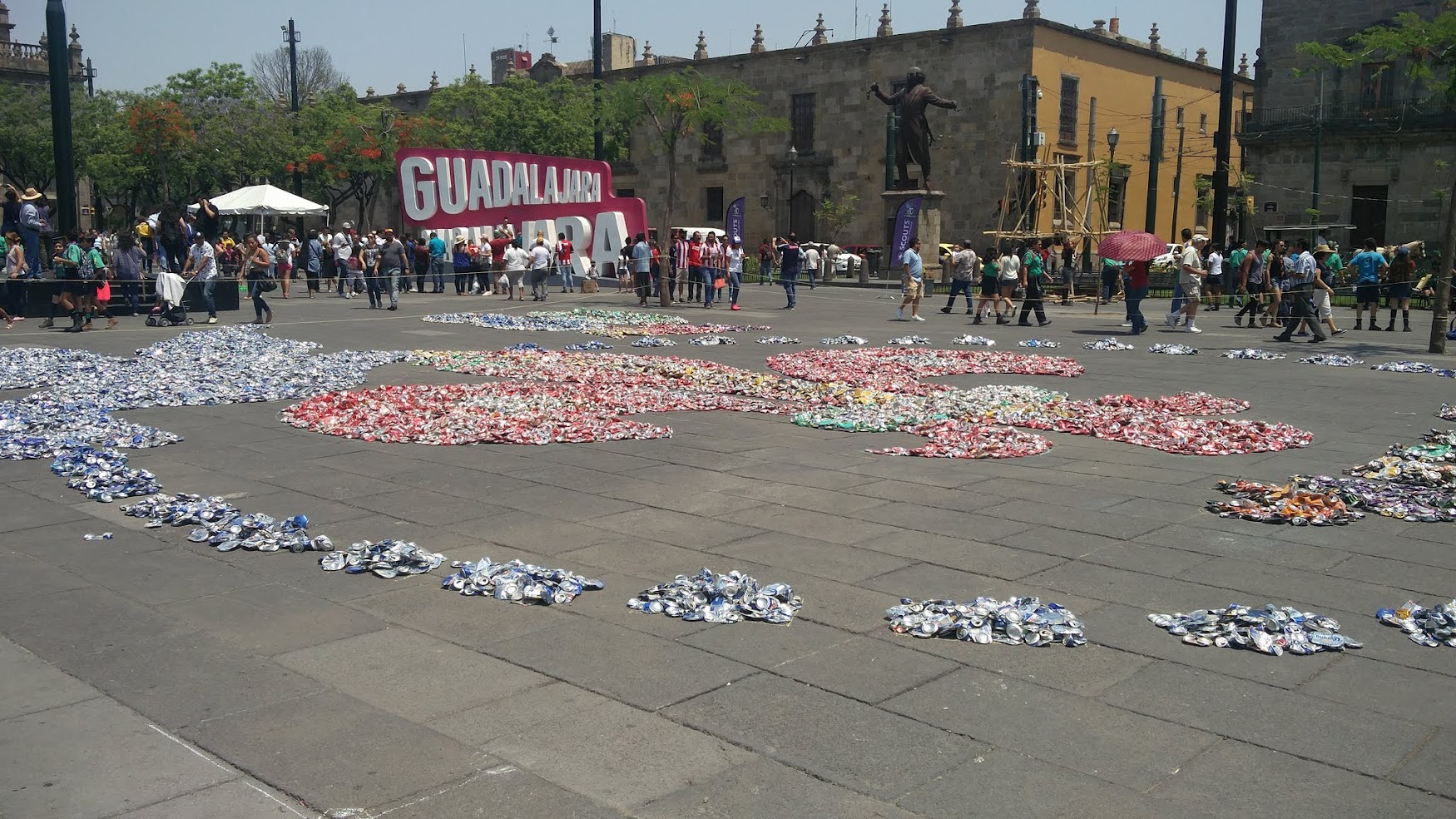 After lunch, my friend’s dad drove us to the game. As expected, the traffic was real bad. On the way there, as my friend’s dad drove, he says to us that he’s going to break a bunch of traffic rules and not learn from him. He then proceeds to cut a bunch of lanes, crossing the hatched areas on the road, and cuts in in front of people. He even made use of an handicapped sign on his car to get into the parking lot quicker even though he wasn’t handicapped at all (seniors just get those because they’re above a certain age). With his epic driving, we got to the stadium right on time. 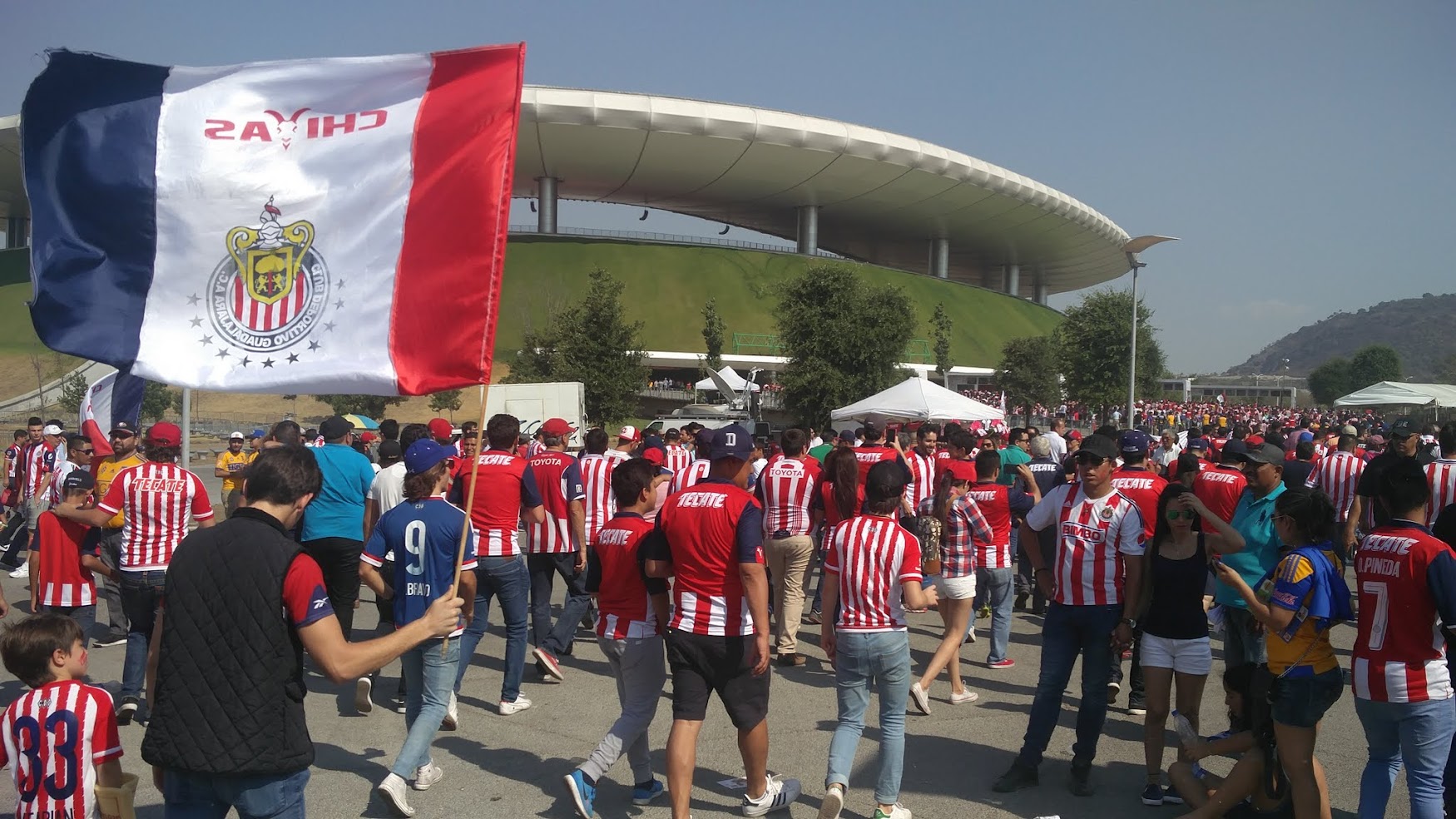 Now, the moment of truth. The guard checking the tickets would be the one to tell us if the tickets were real or not. As we got closer, we got more and more nervous. The guard scanned our tickets and waved us through. What a relief. We didn’t need any of our contingency plans after all. Logically, everything went smoother than we could have possibly imagined. Now it was time to enjoy the game!

The entire crowd pretty much supported the home team, and there was a small section of Tigres fans, probably about 50-100 people only. Tons of people waved Chivas flags, and some even waved the French flag because it had the same colours as the Chivas jersey. We all bought jerseys for the game too! 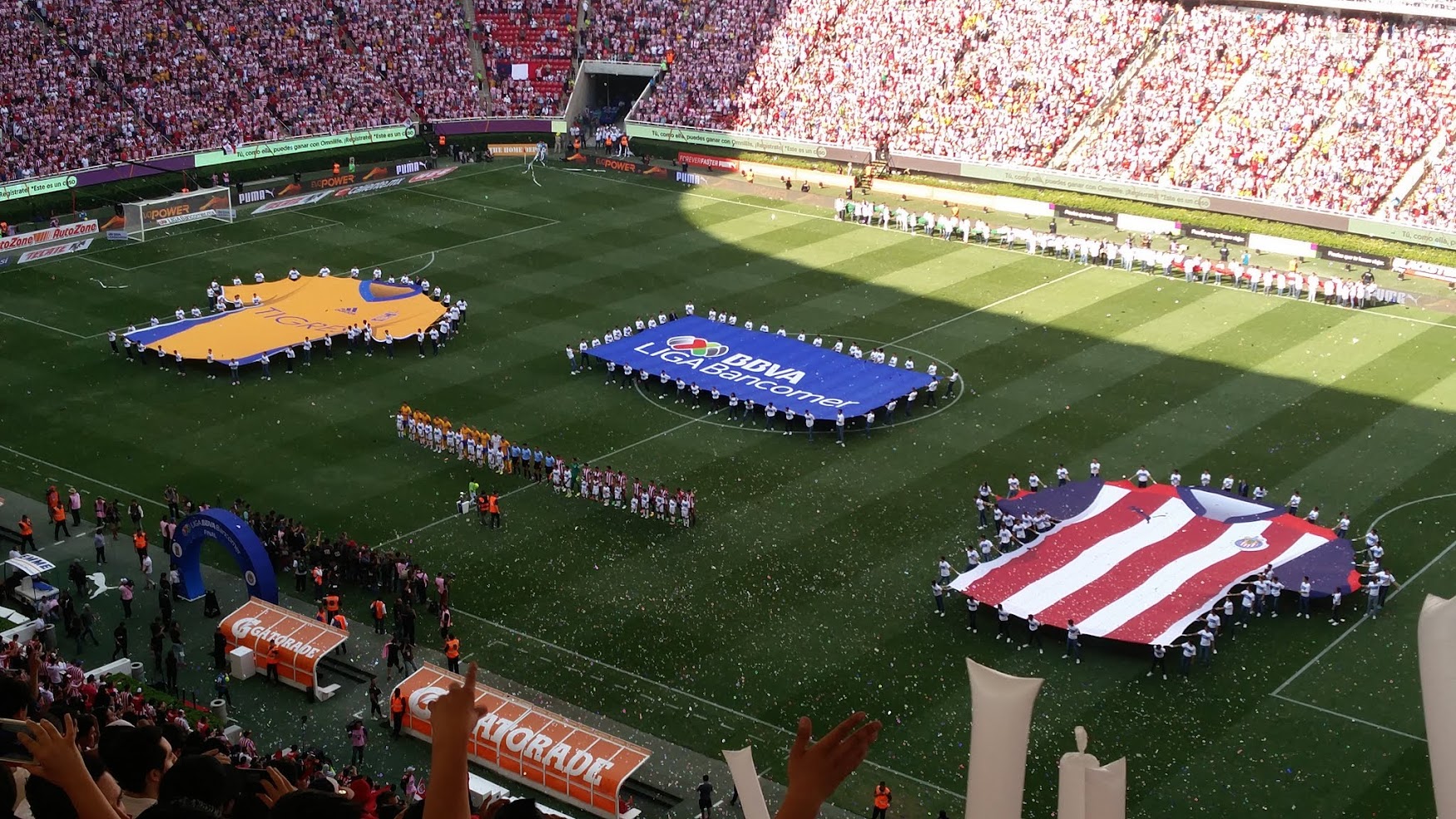 As the game went on, the crowd cheered and chanted, “dale dale dale rebaño!”, which roughly means “let’s go herd [of goats]” (chivas means goats). At one point, when it looked like the Tigres were making a comeback, the crowd cheered even harder. With an amazing 2-1 finish (4-3 aggregate), the Chivas had beaten the Tigres to win their 12th championship! 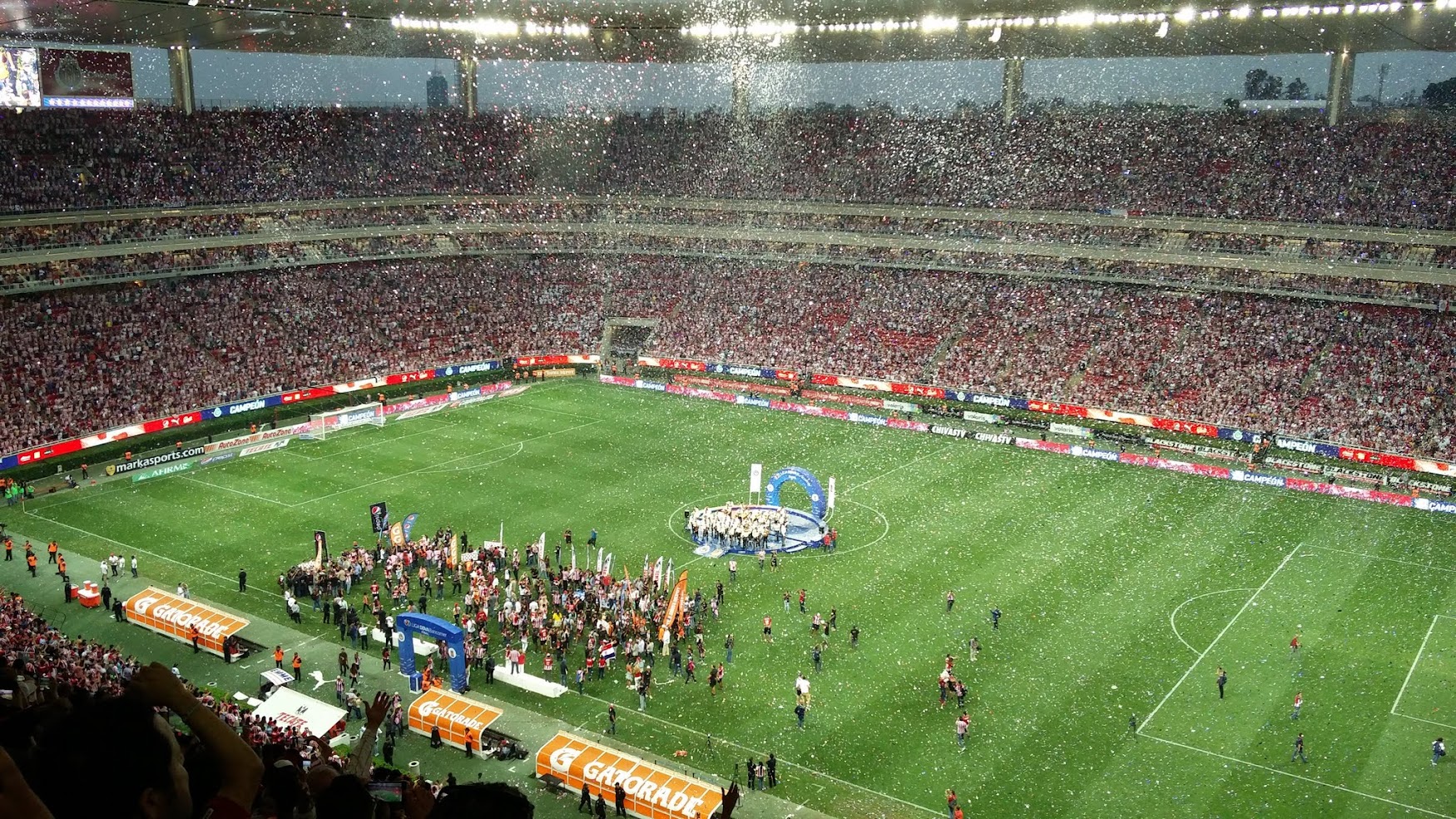 That night, large crowds gathered at the Minerva statue in the city to celebrate the team’s big win. My friend’s dad said he’s never seen the crowd this big in a long time. To celebrate, the dad made us all tequila cocktails (there was probably 3-4 shots worth of tequila in that) before we headed out and had a great time. As the only Asians in the city (my American friend is of Japanese descent), we stood out a lot and people occasionally said random phrases to us in different Asian languages. I guess that’s what happens when two Asians show up with Chivas jerseys! 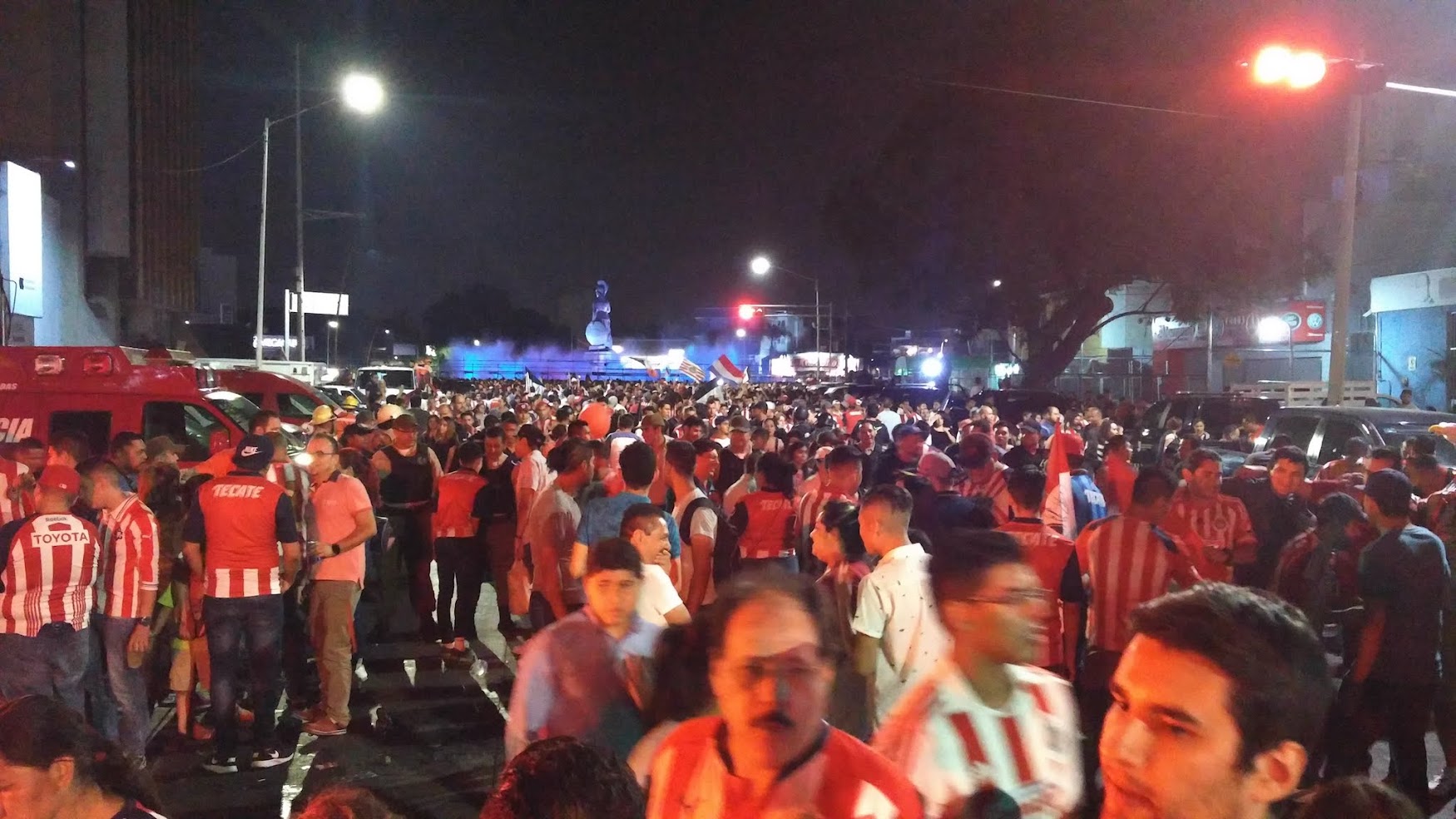 Last, but not least, the food

My first meal when I arrived in Mexico: Menudo. My friend thought my stomach wouldn’t be able to handle it, because the meat in the soup was tripe. But, nope! Chinese people eat tripe all the time! 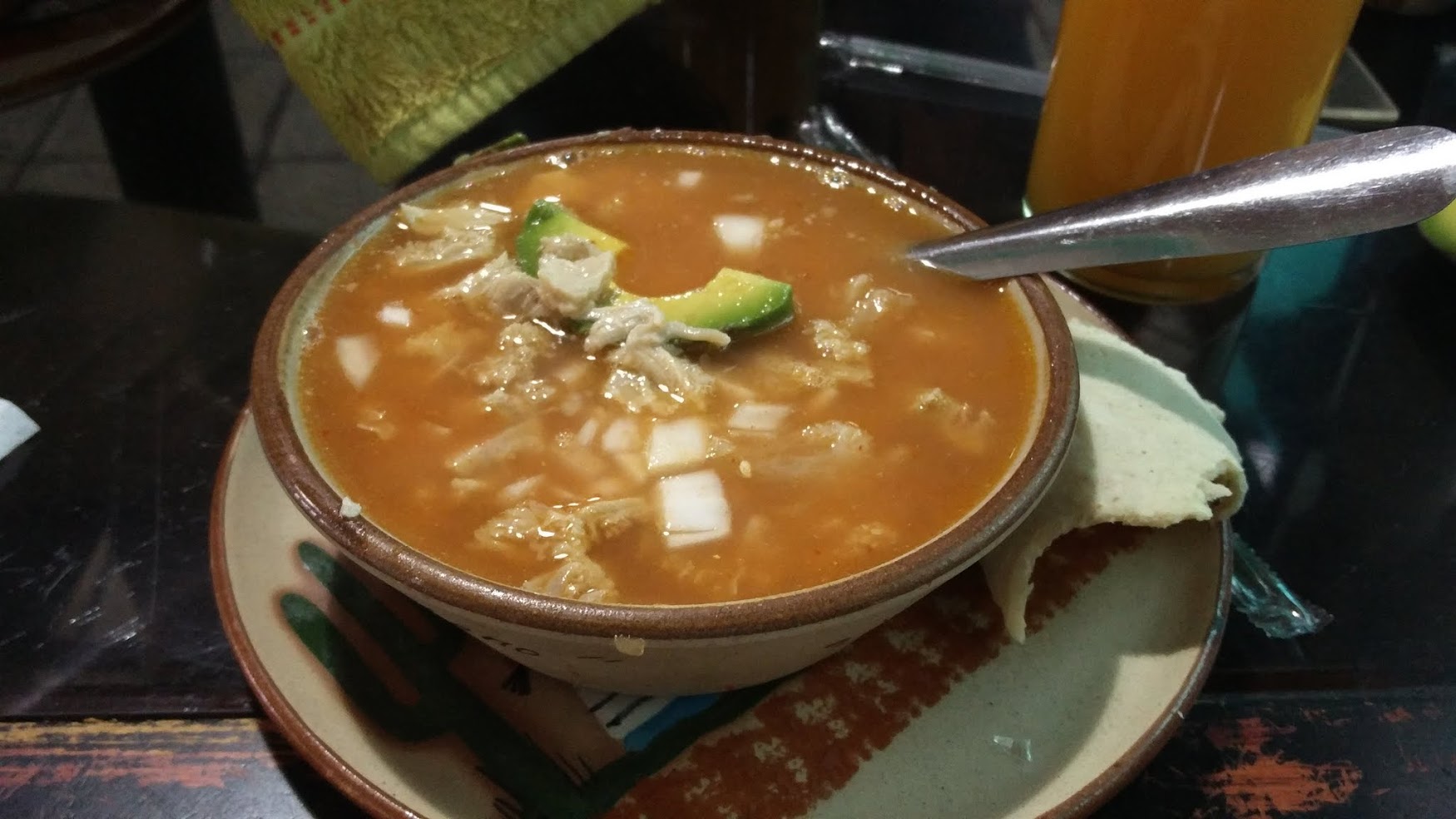 Not exactly a meal that I had, but there is a running joke that a guy can take a girl out with roses and a can of Jack Daniels. Once that joke caught on, the store intentionally started putting roses next to the Jack Daniels in the store. 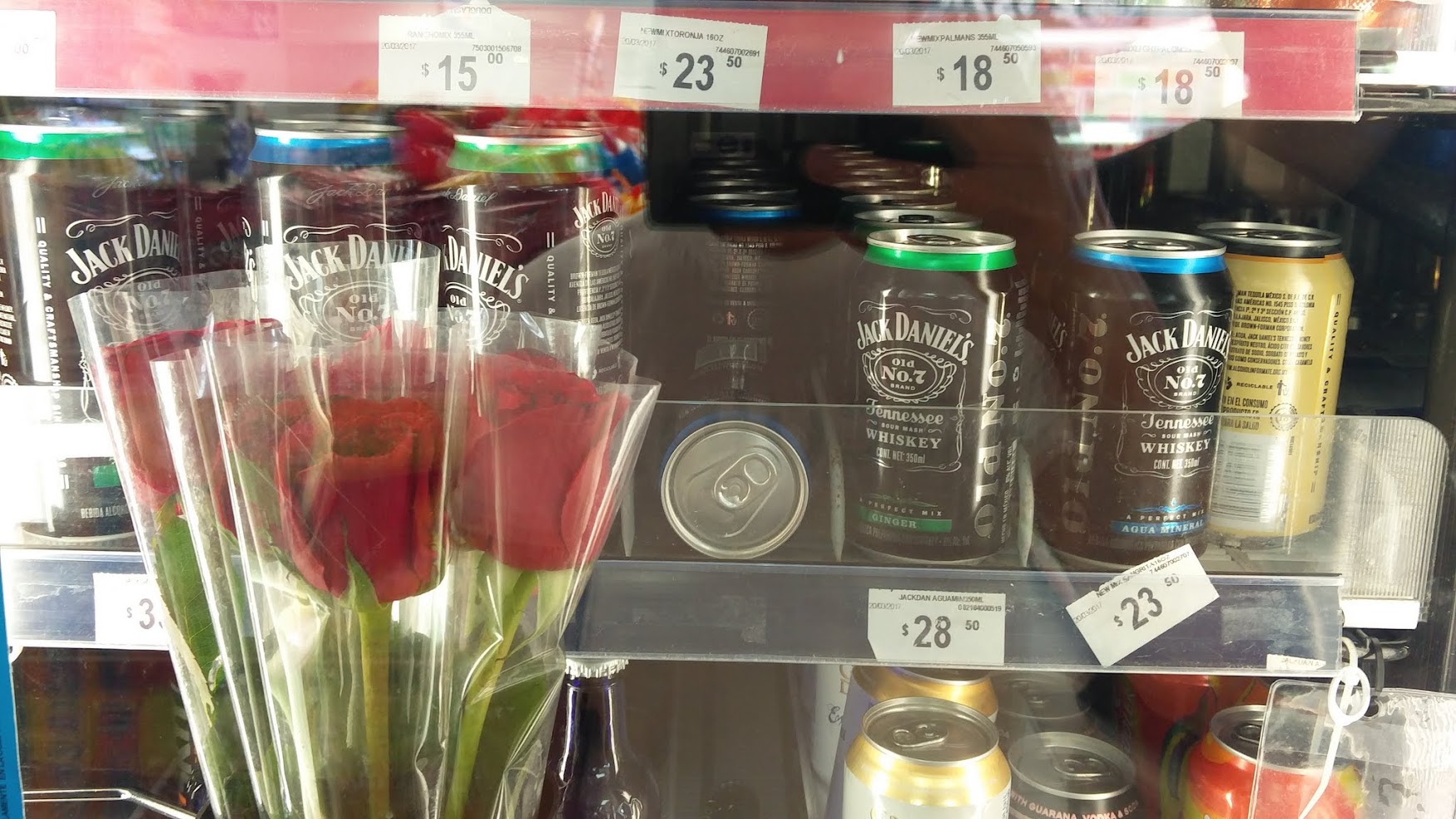 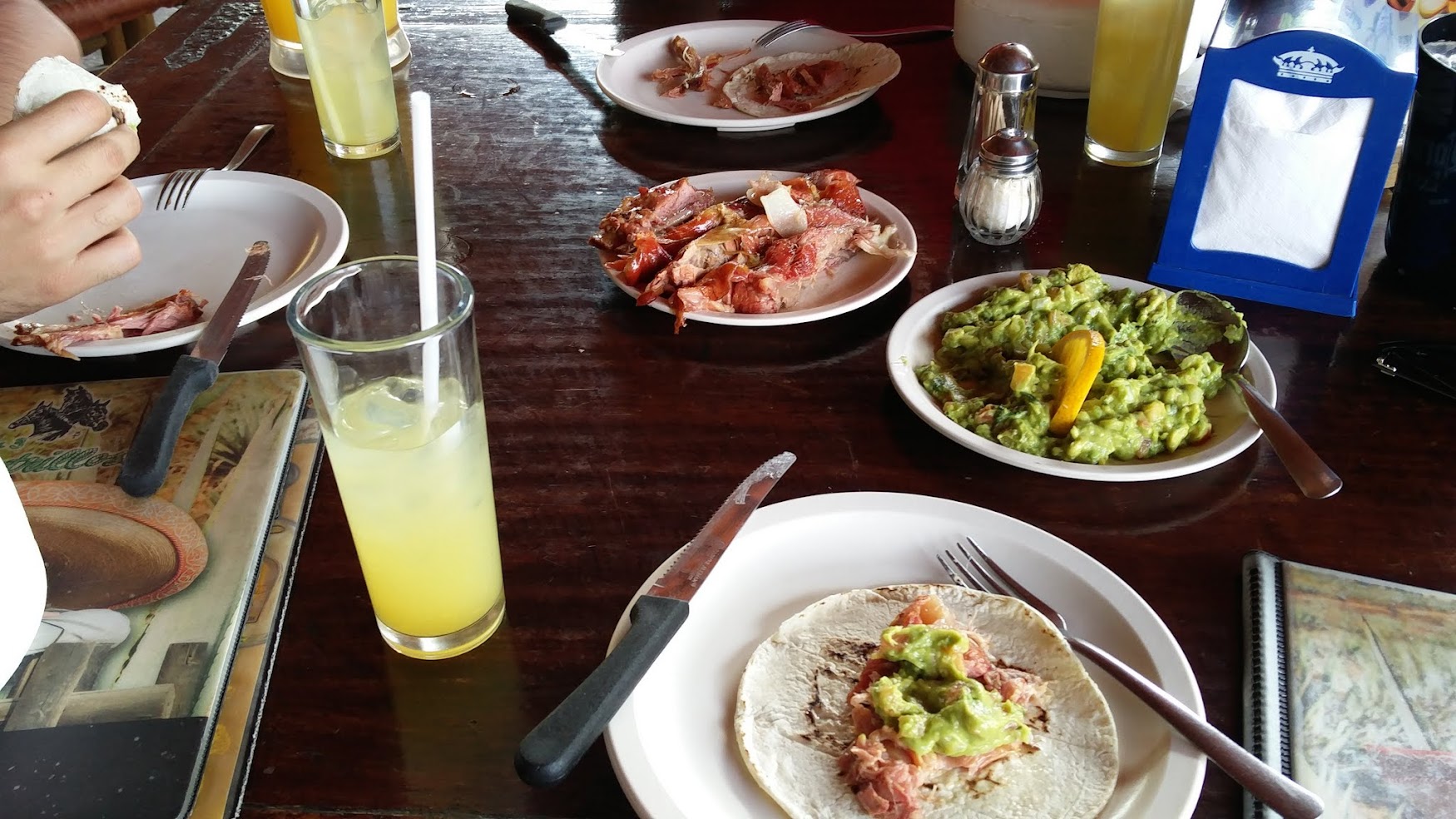 Lonches. Basically a sandwich with meat inside served with a dipping sauce on the side (can also just be poured onto the plate to let the bread soak). The bread used is a kind local to Guadalajara (birote/bolillo). 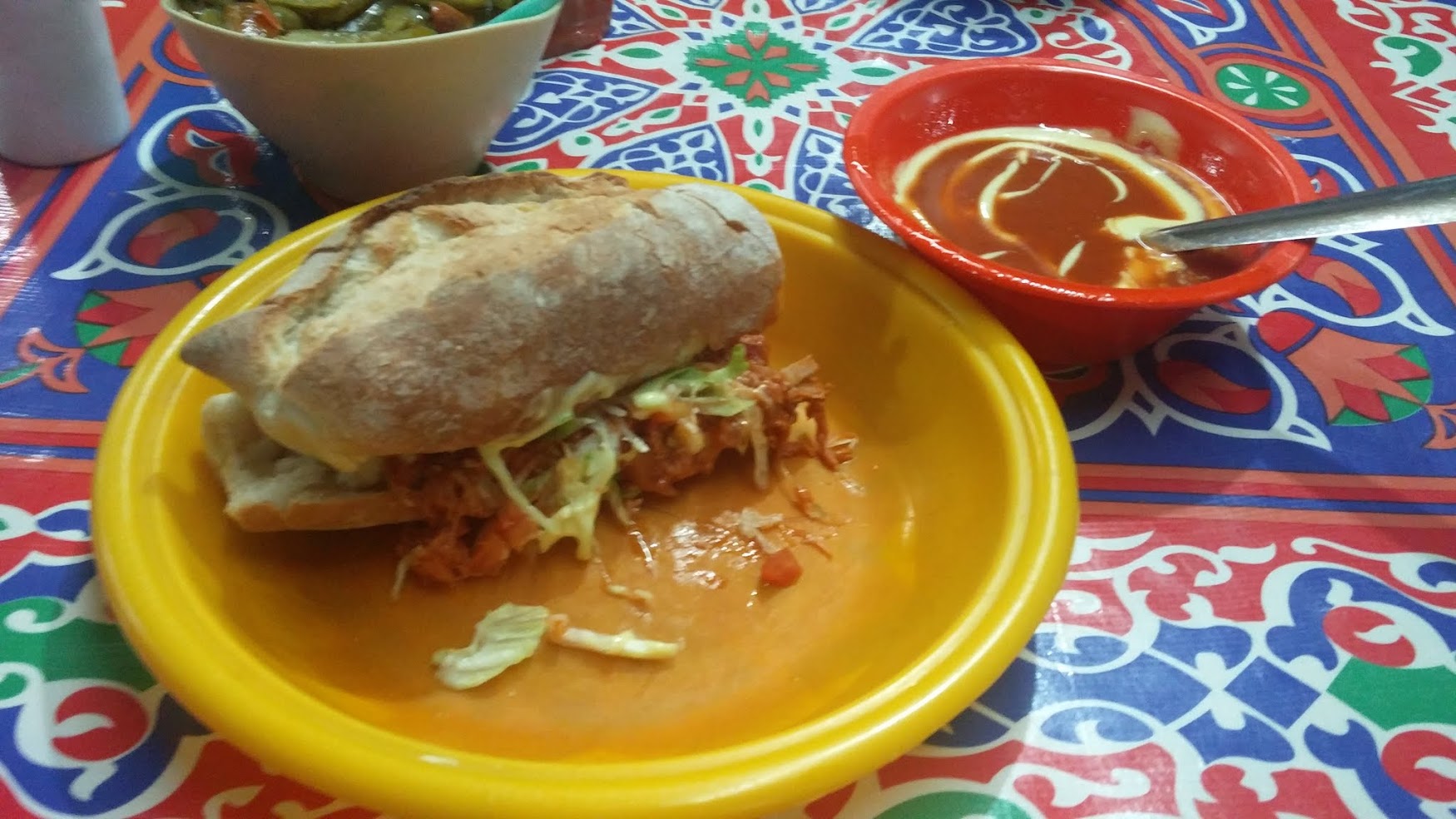 Then there are tortas ahogadas. Very similar to lonches. It has a the same bread, but this one is way meatier and the sauce is a tiny bit of spice. 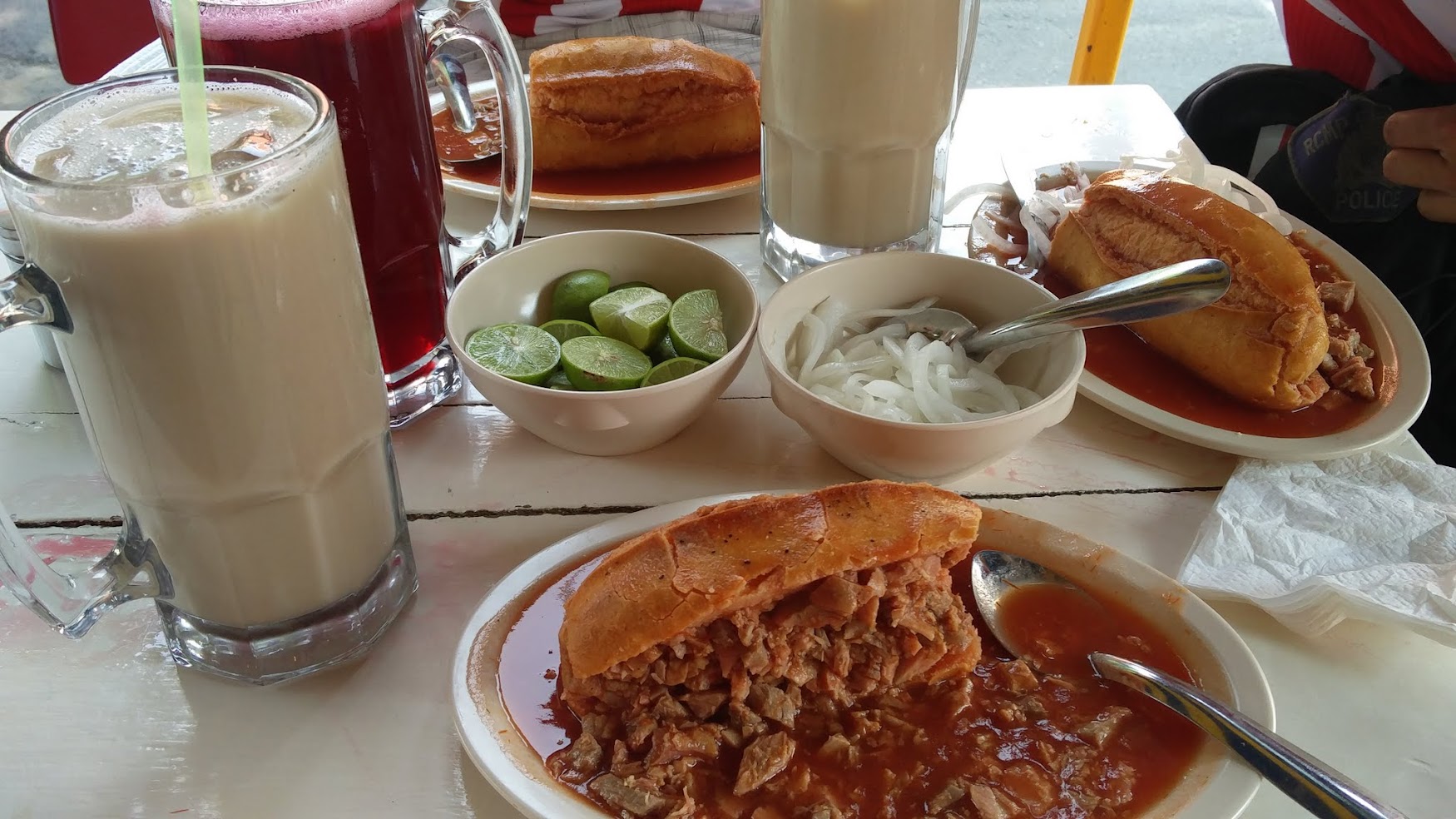 Ceviche! A dish with raw fish cured in lemon/lime with added spices. Can’t say no to seafood! 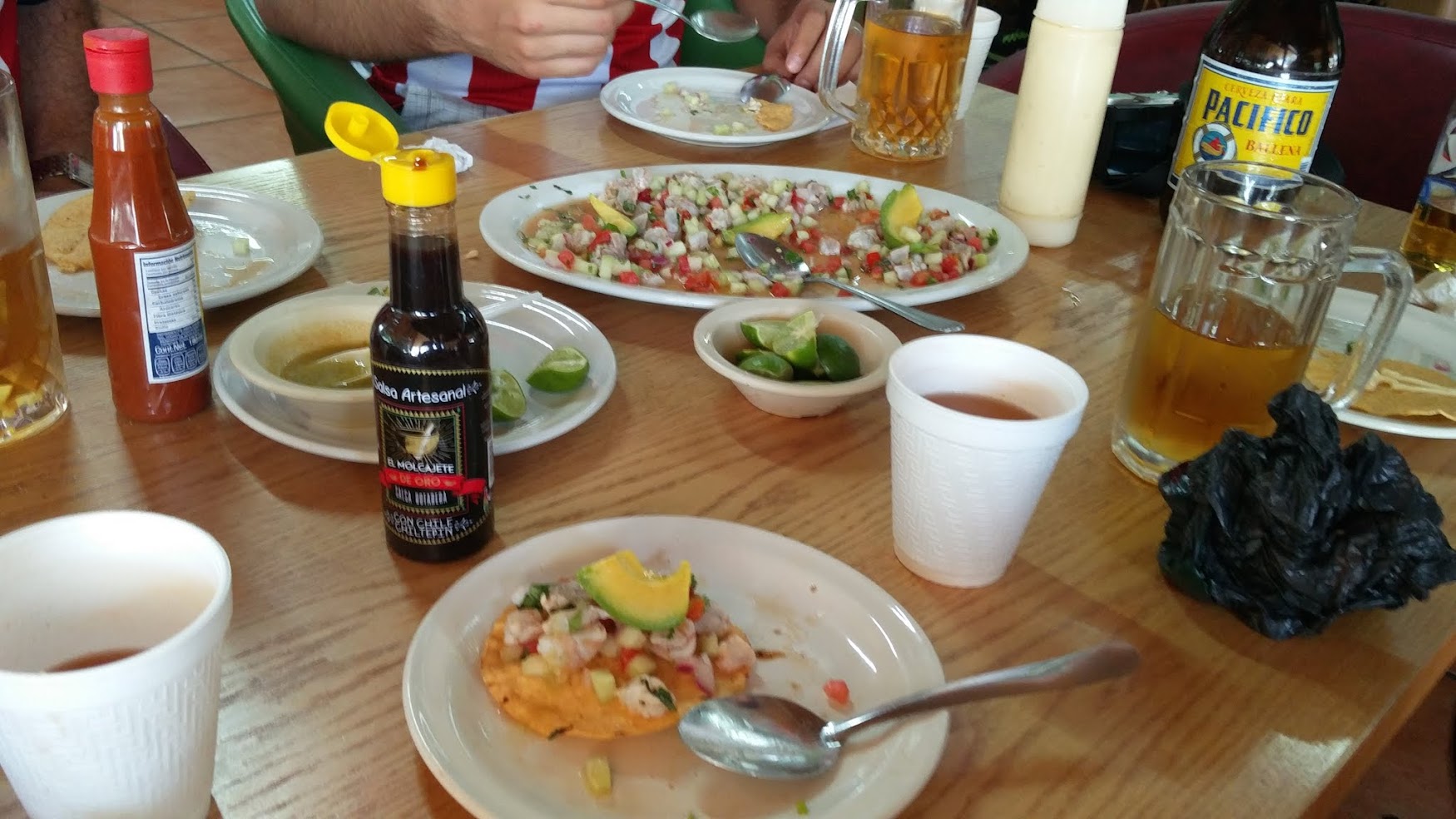 My friend’s mom also cooked food for us and I totally wish I had taken some pictures of that food. She cooked a pork stew and I wish I knew what was in the sauce! Both parents encouraged me to eat so much and they showed so much hospitality! They kept offering me more and more food until I was super stuffed. Good thing my friend’s brother taught me “estoy bien”! This was definitely one of the best trips I ever had – full of excitement and not just doing touristy things. Having a local show you around really helps!