With one week of vacation left at my job for this year, I decided to go to Hanoi, Vietnam! I chose Hanoi for a couple reasons: somewhere I’d never been, somewhere I’d like to go, and I can get cheap airfare. My plane tickets there and back only costed $630 USD through Asiana Airlines.

The weirdest part about boarding the plane: all the flight attendants just assumed I was Korean and spoke Korean to me, but changed to English for anyone that didn’t look Chinese/Japanese/Korean. I guess better to do that than to wrongly assume and speak English to actual Koreans. What’s cool about a Korean airline is that they serve Korean food like Bibimbap too. Oh, and they also asked me if I had a Samsung Galaxy Note 7. I guess that makes sense. Exploding plane… not good…

I arrived in Hanoi at night, and after a terrible night of jet lagged sleep, my adventure began.

Crossing the street on busy streets without traffic lights

Probably the biggest WTF moment I had was when I noticed that there are exactly zero traffic lights at intersections and there’s like a hundred people on mopeds crossing these intersections. People here are somehow magically able to weave through each other while crossing the intersection. People crossing the street just walk at a constant pace and just let the drivers drive around them. 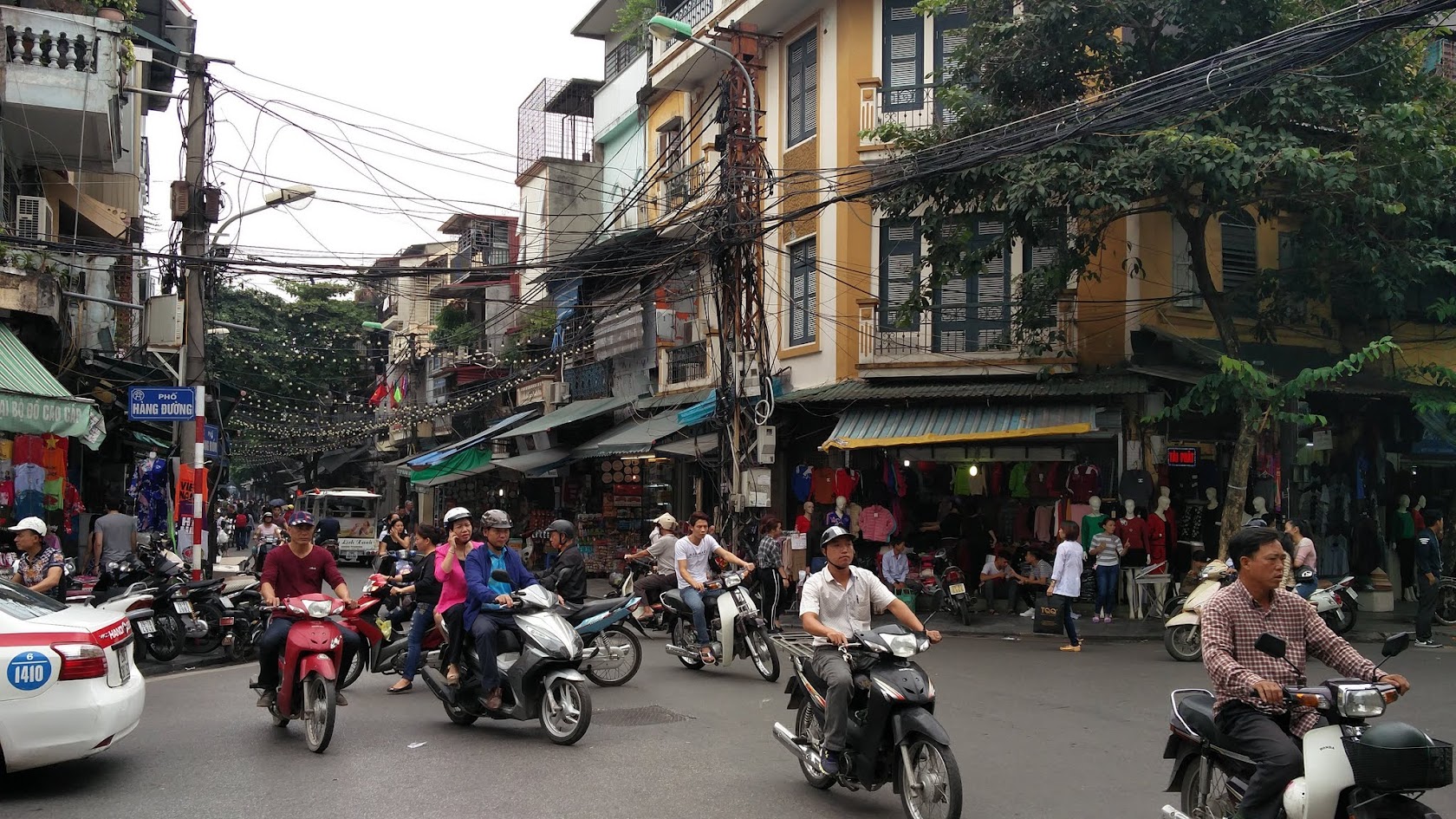 The first time I crossed the street, it was like a giant leap of faith. As I’m crossing the street, I’m thinking “I wonder if this is what it feels like to know your life is about to end”. After I crossed, I thought, “Oh that wasn’t so bad”. But then there are like a dozen more intersections to cross before getting to the destination. After a while though, it definitely got easier.

I thought I was used to large Asian cities (e.g. Hong Kong, Tokyo, etc.), but Hanoi is on a different level. The average population density of Hong Kong is about 6000 people/square km, but in Hanoi, it’s about 15000. For some reason though, it doesn’t seem like there are as many people walking around as in Hong Kong or Tokyo. Maybe it’s because they’re all driving their mopeds. It’s so crowded here that some people live in front of an unused railway track. 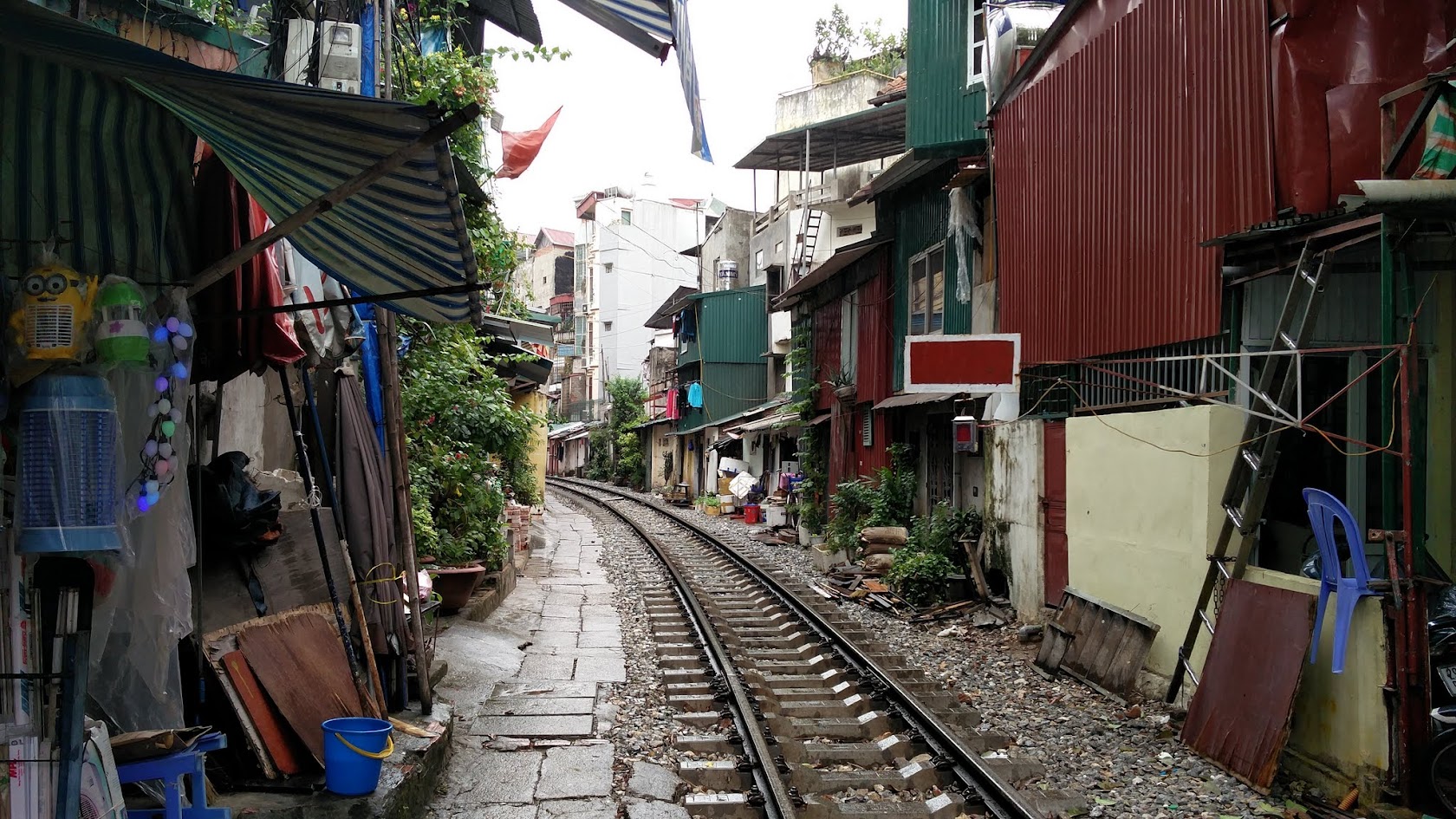 The streets are way less spacious too. People are always selling stuff on the side of the street, or people are parking their mopeds everywhere, so it makes it really hard to just walk in a straight line along the sidewalk. And as you’re walking, you’re constantly smelling exhaust.

The street markets are often selling cheap knockoffs of things. People on the street were selling tons of North Face jackets. Apparently, they are made in Vietnam, but I have no idea whether or not the jackets here are real though, but they sure felt real. And they only cost $35 USD. I picked up two football jerseys for Bayern München and Borussia Dortmund for about $5 USD each. Dong Xuan market is another place selling tons of cheap stuff. Stores are tiny, but full of merchandise stacked up and the walkways are super narrow, but to our western standards, everything is super cheap. This is a city where a regular guy like me can walk into a Louis Vuitton store without being judged by all the people working there. 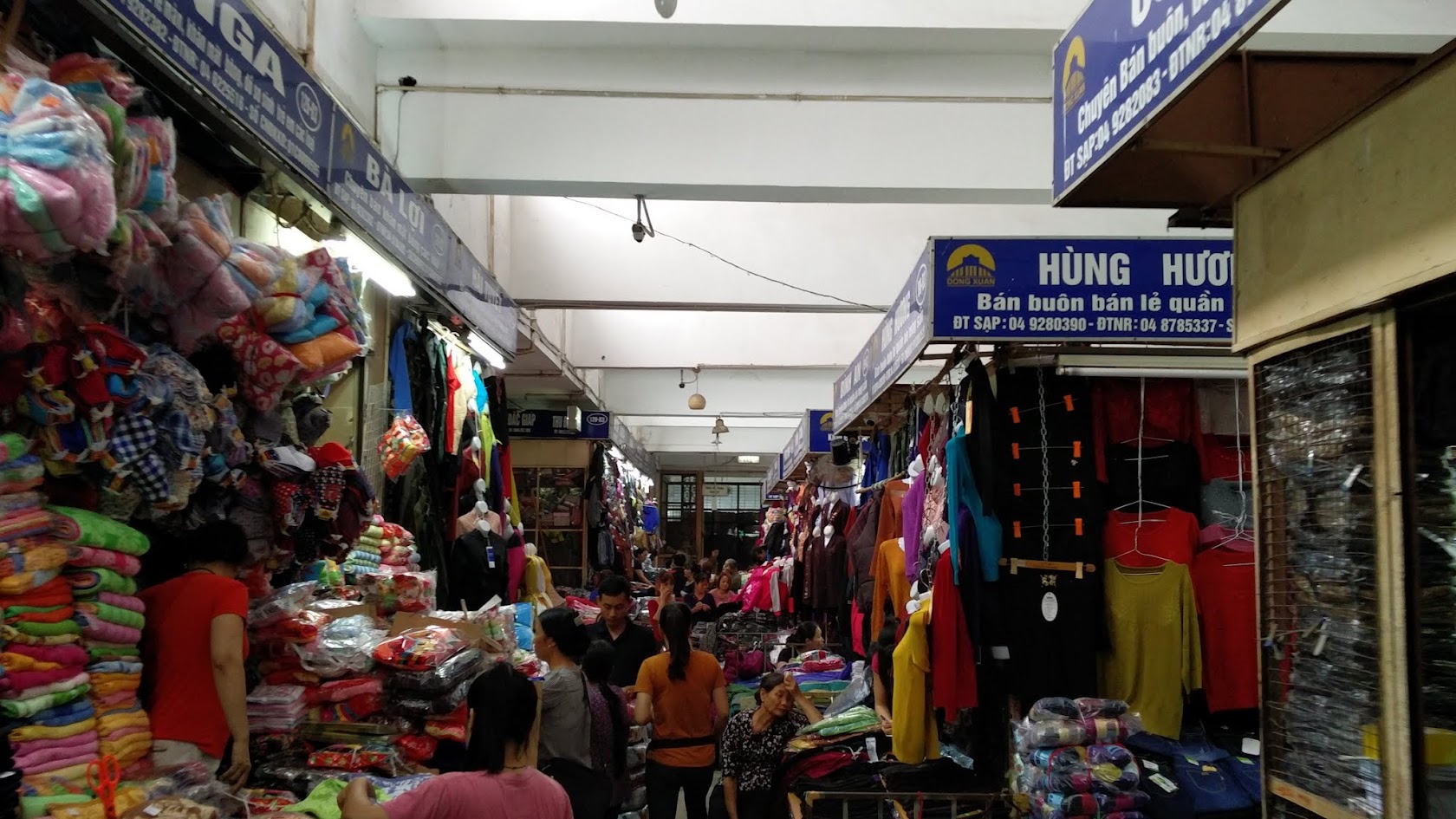 I almost bought this “Lepin” Millenium Falcon for $40 USD. The lady wouldn’t budge on her price =/. 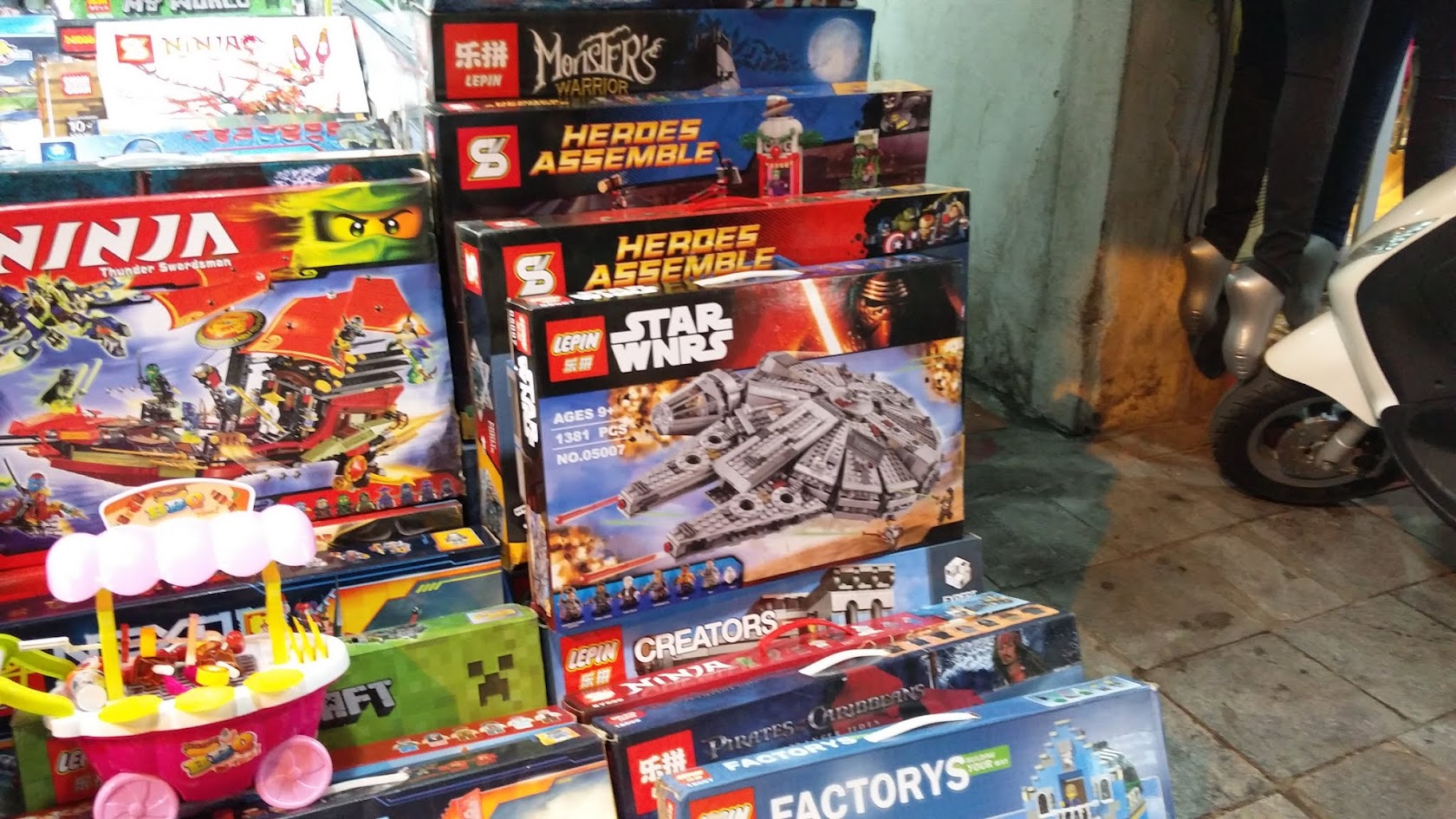 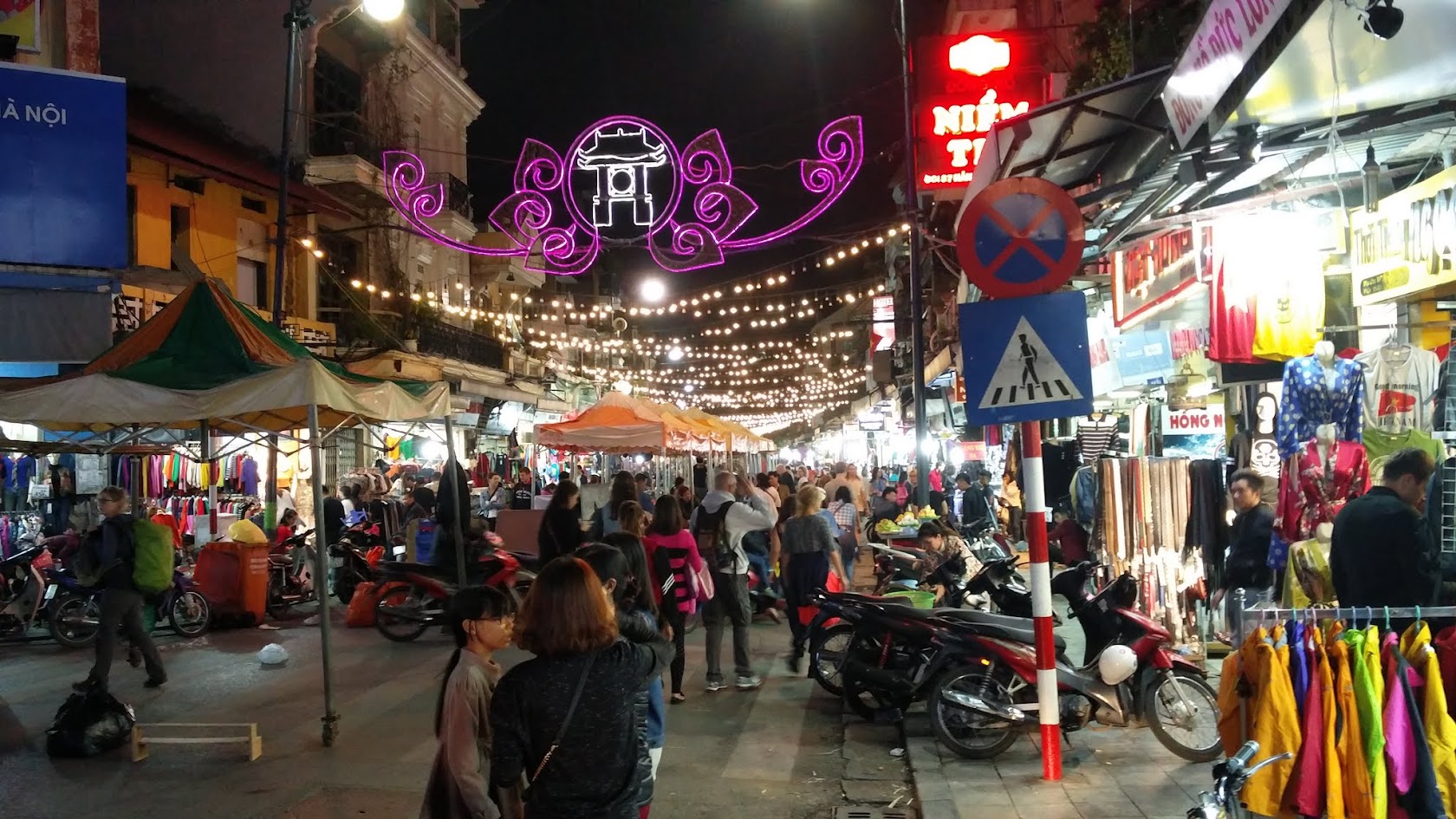 It was definitely the most scenic part of Hanoi that I went to. 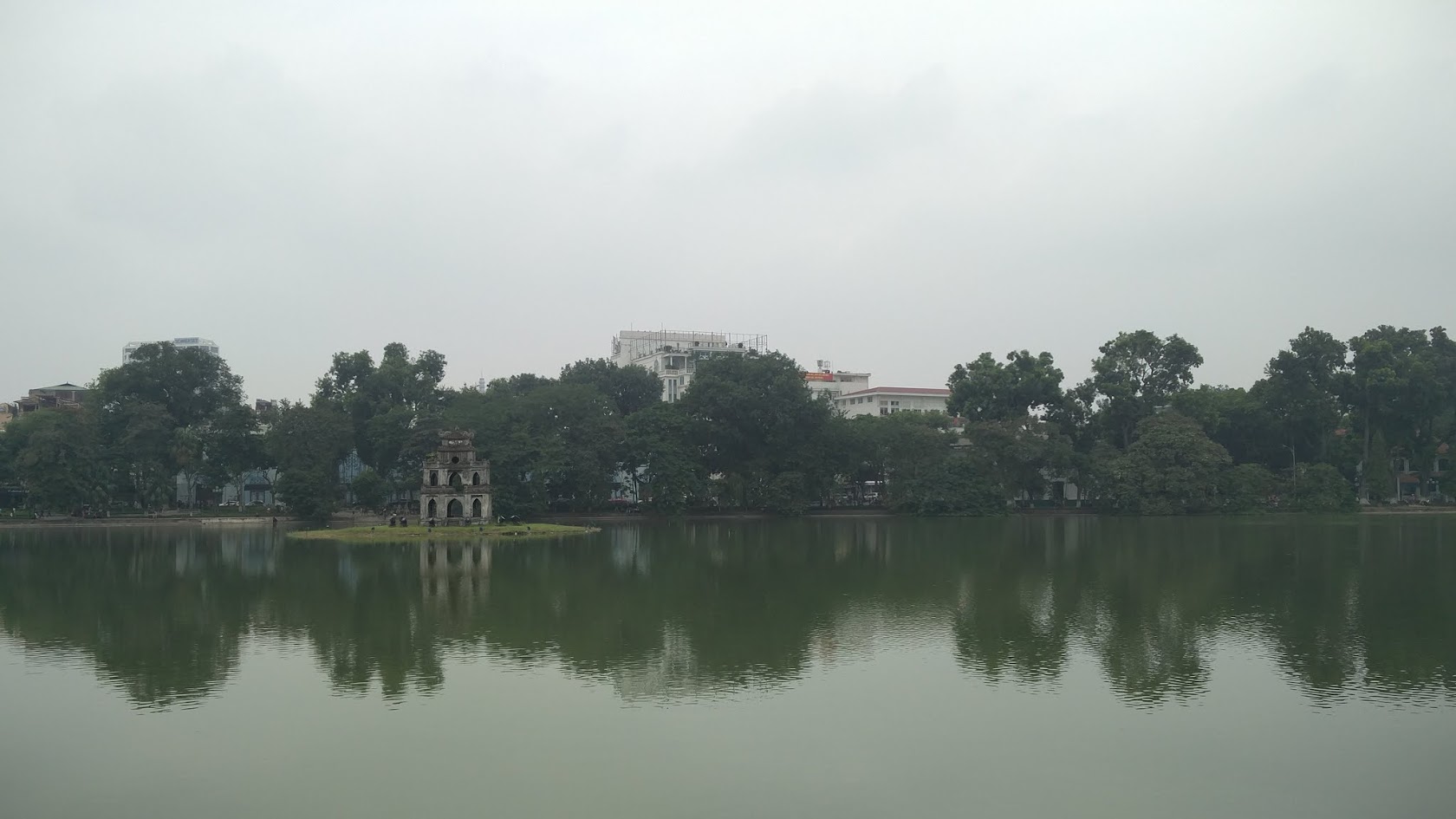 On weekends afternoons and nights, everybody is going to Hoan Kiem Lake to hang out with their family and friends.

I wanted one of these electric cars as a kid…

Literally everybody came out to hang out that night.

At night, the lake lights up real good. 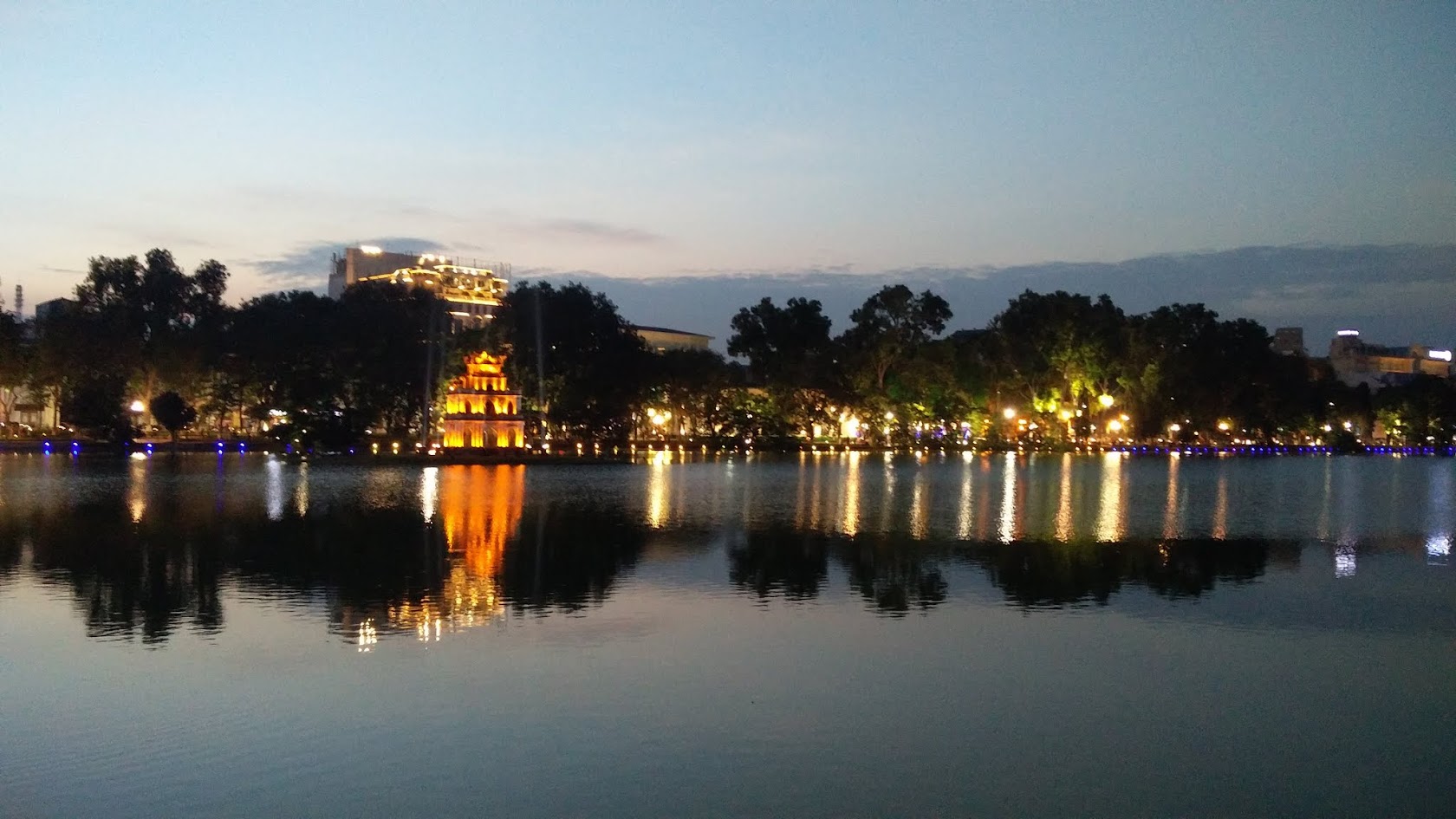 Of course, there’s the food

A while ago, there was a story about Barack Obama and Anthony Bourdain eating dinner in Hanoi. Since that happened, the restaurant they went to, Bún chả Hương Liên, became famous and tons of people went there to eat the “Obama Special” – Bún chả and spring rolls. A local guide we met later in the trip told us that this restaurant is overrated, but I thought it was good. Thanks Obama!

There was also this barbecue place. There’s a giant selection of meats with different cuts and you pick which ones you want and it all gets cooked on a giant barbecue platter. Aside from the usual beef, chicken, pork, they had an entire frog. Looking back, I should have ordered it. Frog is definitely up there on my list of delicious exotic meats. If I knew Vietnamese, I would have asked them if they had dog meat because I would have ordered that for sure. We ended up picking up a few things that looked good, but had no idea what they were. One of them tasted like beef and was kind of chewy and reminded me of beef intestines that I ate in Osaka. 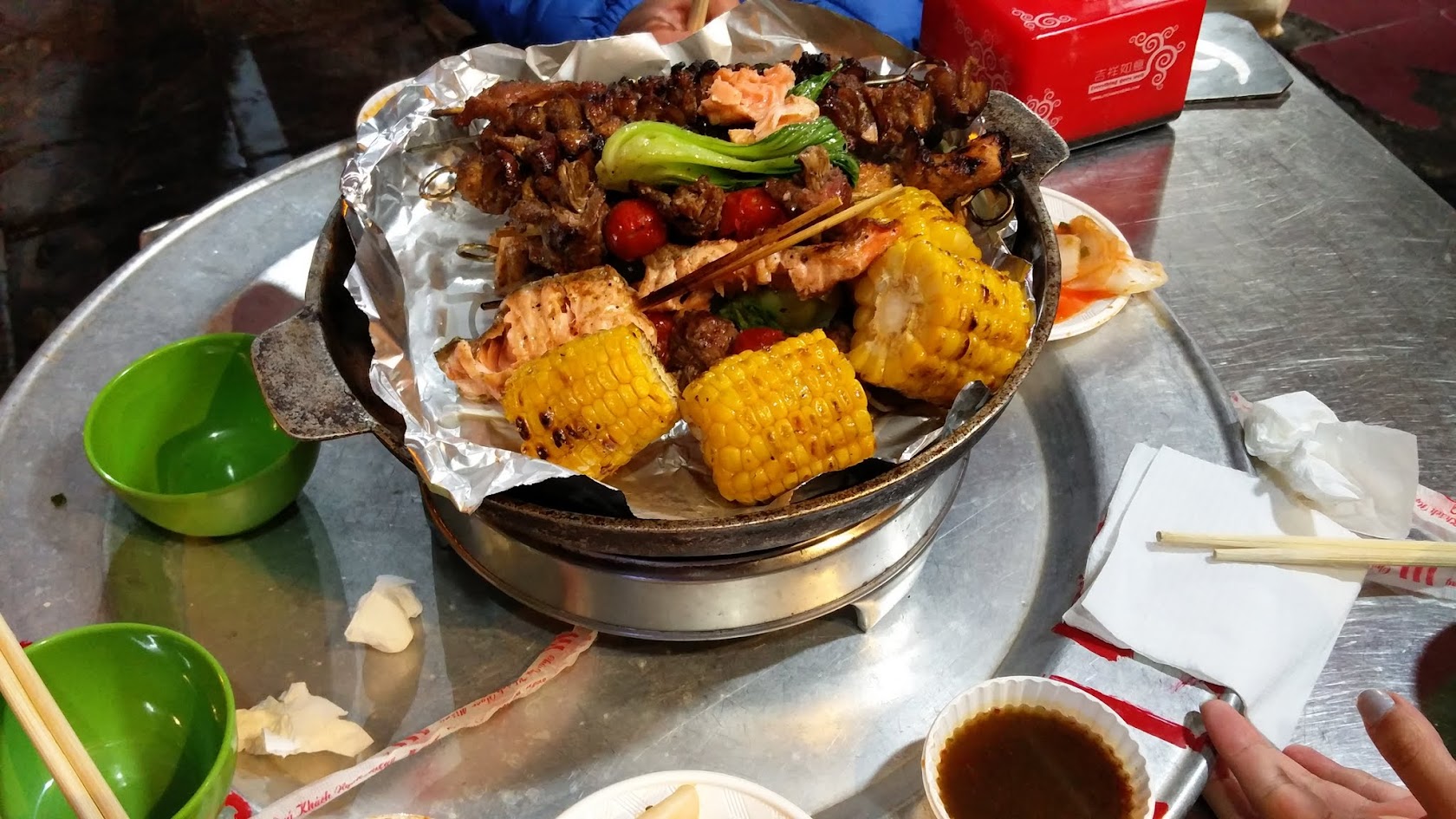 At one point in the trip, we got a volunteer tour guide to take us around the city to eat stuff. We help them practice their English and pay for their food, and they show us around – it’s a pretty cool idea (Hanoikids). Our guide took us to try some fried eel in a salad and some eel soup. 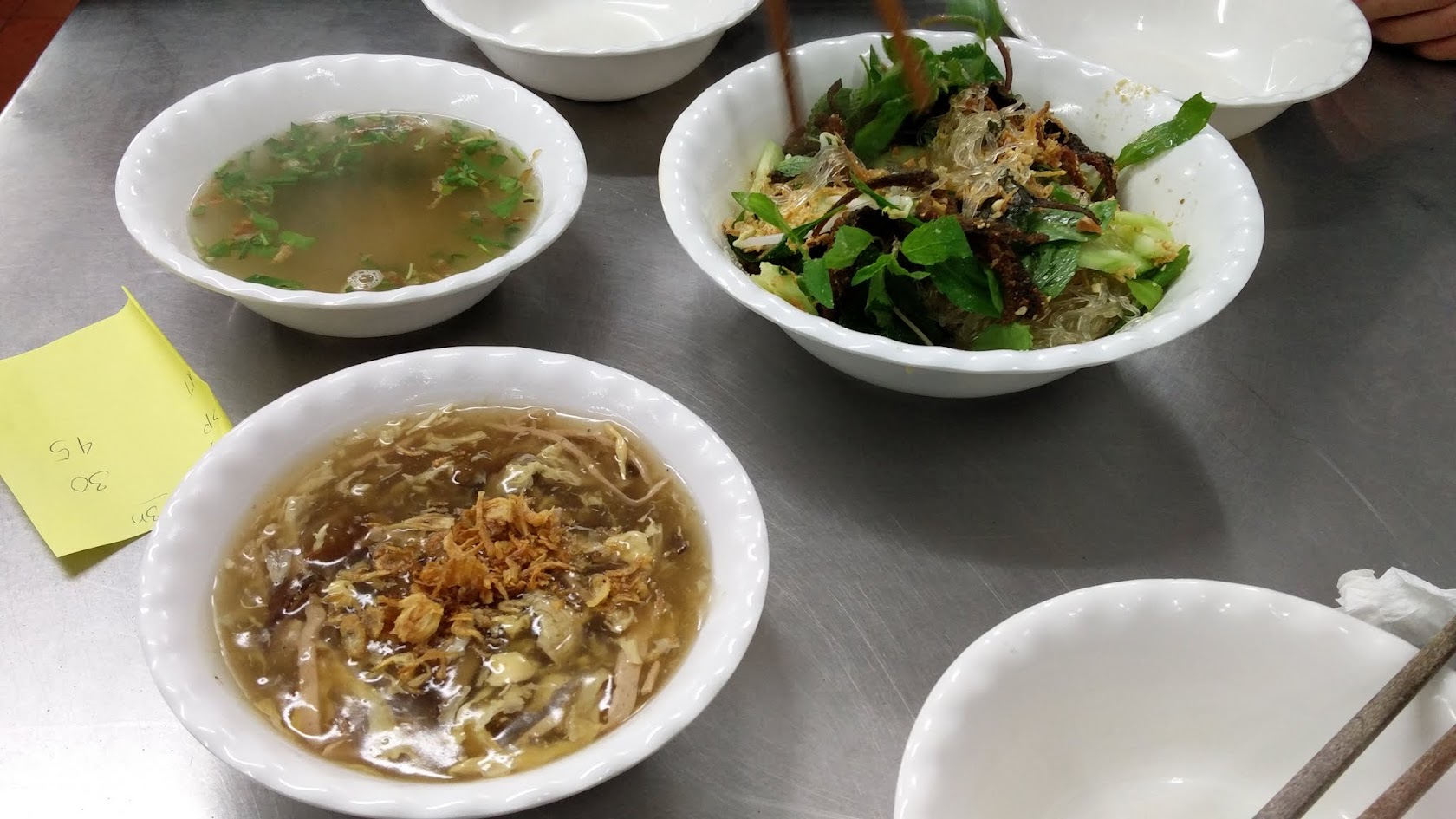 Our guide also took us to eat this Vietnamese version of a steamed rice roll. Not as good as the kind I eat at Dim Sum. 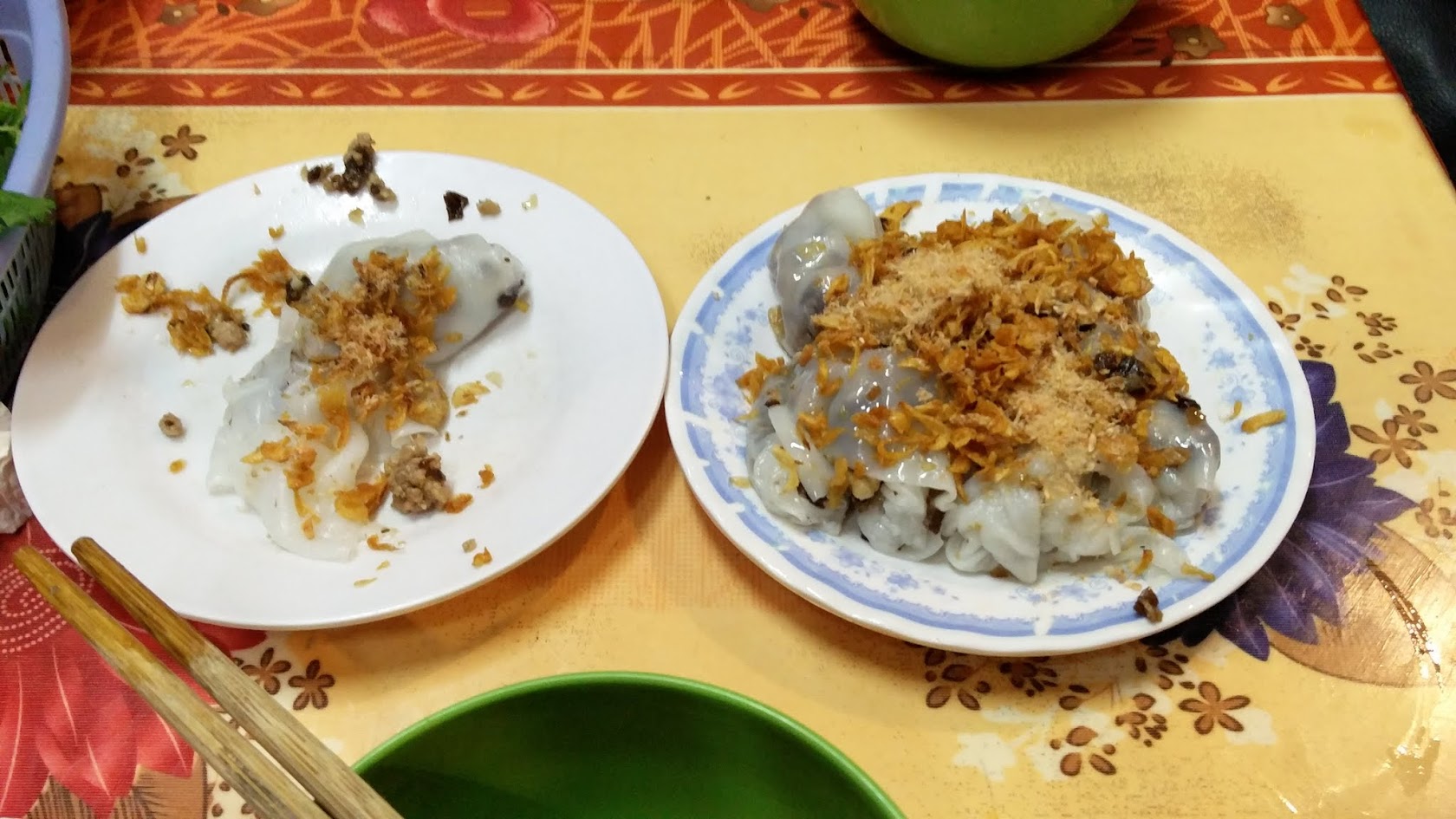 Everybody knows Pho. It’s a lot different than the ones I eat in Vancouver and not very comparable. The ones I ate in Hanoi were generally plainer and was less savoury. It also costs about $2.50 USD. Some people prefer this taste over the kind we get in the western world, but I would disagree. 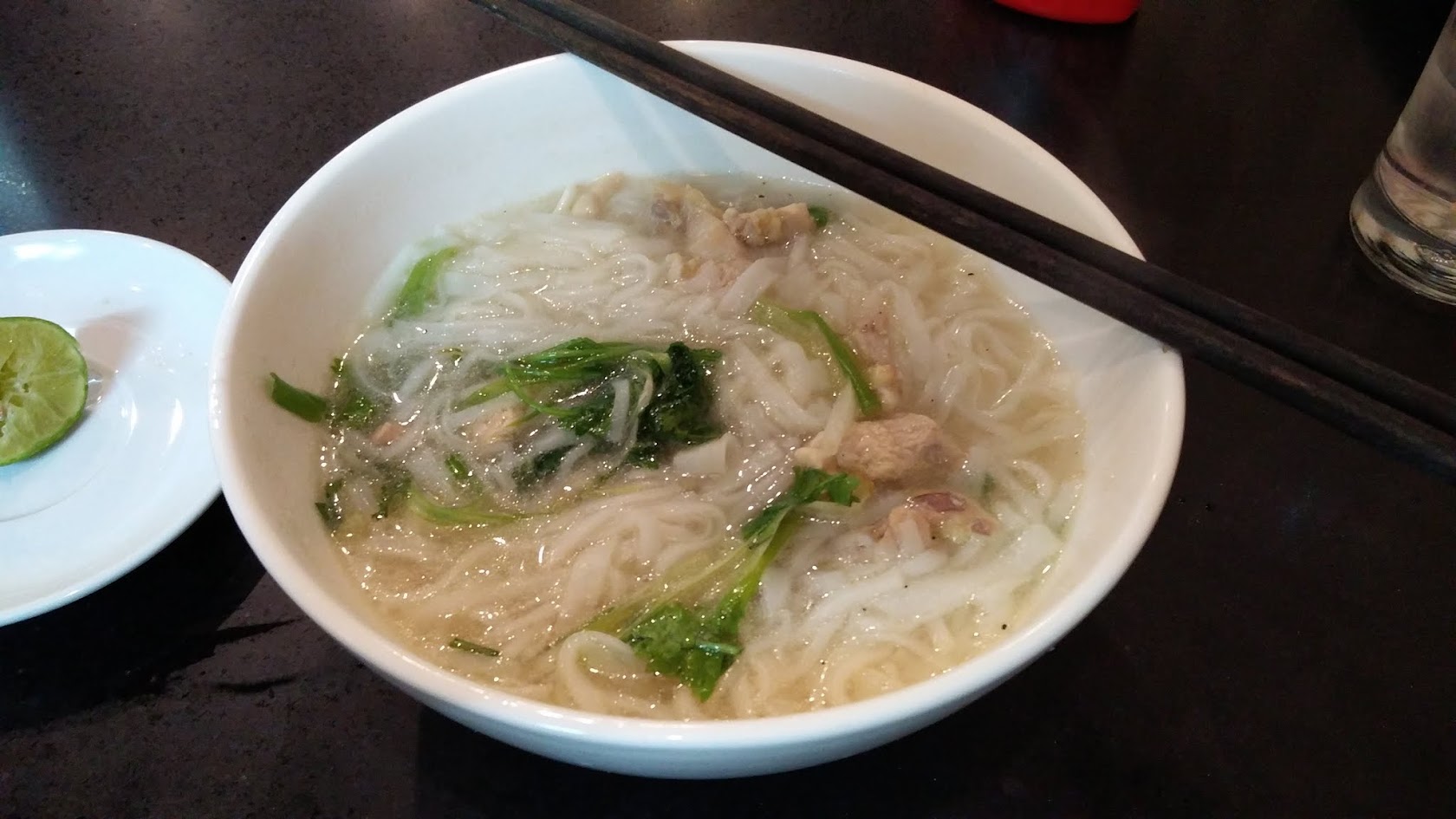 By far the best meal of the whole trip was at “The Hung Snake Restaurant“. Yep, I got to eat an entire snake – a bamboo snake. A guy came with a sack with a snake inside. He took it out and let me hold onto it to “play” with it before eating. Sure, okay, playing with a snake is great and all, but that thing was frickin poisonous and the entire time, I was just kind of freaked out and hoped that thing didn’t bite me.

The next thing you know, the guy takes out a platter with scissors and knives like in a surgery and cuts open the snake. As it bleeds to death, he drains its blood into a glass, THEN takes out its beating heart and puts it into another glass. FINALLY, he cuts out part of the stomach and drains its stomach bile into another glass. He hands me the glass with the still beating heart and tells me to eat it. It was exactly what I came here for and it was amazing. I only wish I had chewed the heart before swallowing it instead of swallowing it whole like he told me to. 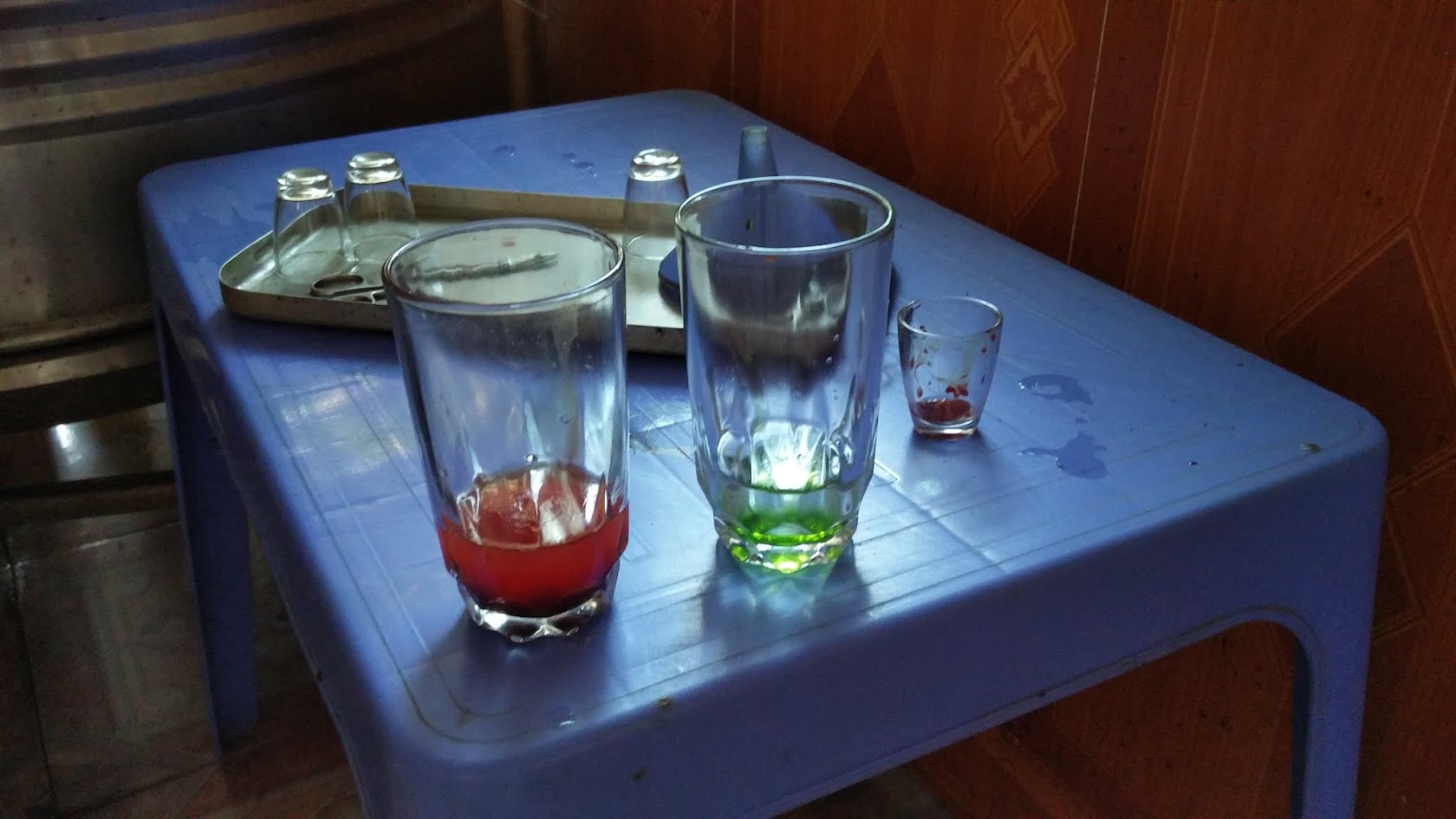 The blood and bile were mixed with some sort of alcohol and I drank those too. My friend on the other hand, could not bear to watch the snake get murdered like that and barely ate any of it when the food actually came. More for me :). All sorts of snake bits were used with different cooking styles: grilled meat, deep fried bones, deep fried skin, snake tail boiled into a soup, sauteed meat, spring rolls, steamed meat, the stomach, etc. Everything was GREAT. A++, would eat again – the king cobra next time. 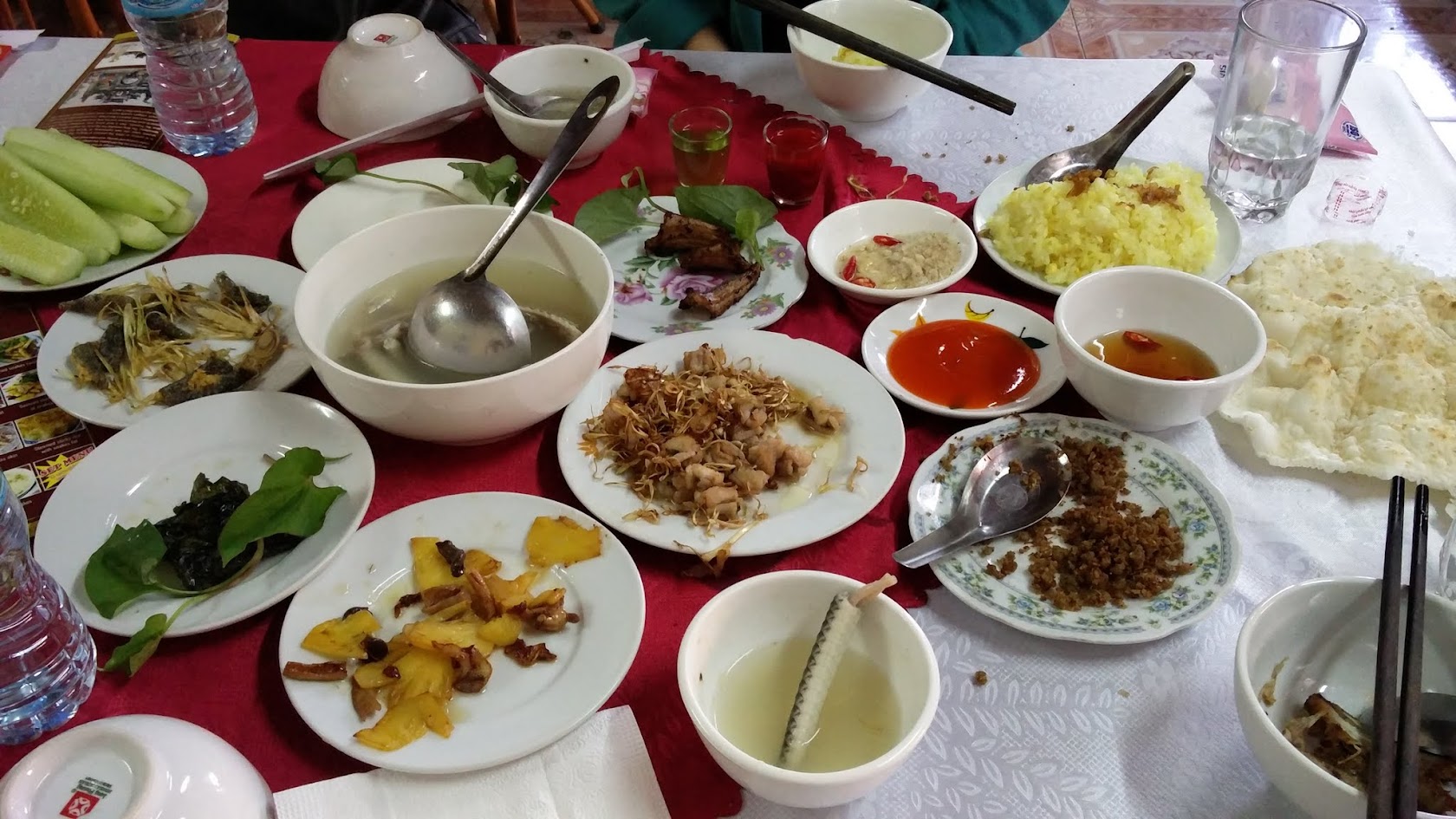 In addition to snake, I also wanted to try cat meat. I asked the staff at our hostel and he told me that he knew that people did eat that sort of stuff, but wasn’t able to tell me where. Too bad. I also missed out on this silkworm omelette that they only serve in the mornings. Everywhere I saw a cat or a dog, I’d wonder if people would kidnap them and cook them =/

As usual, I drank the local beer. The Beer Corner is a popular place. It was weird to see a kid who looked about 12 pour my beer. Apparently that’s allowed around here. 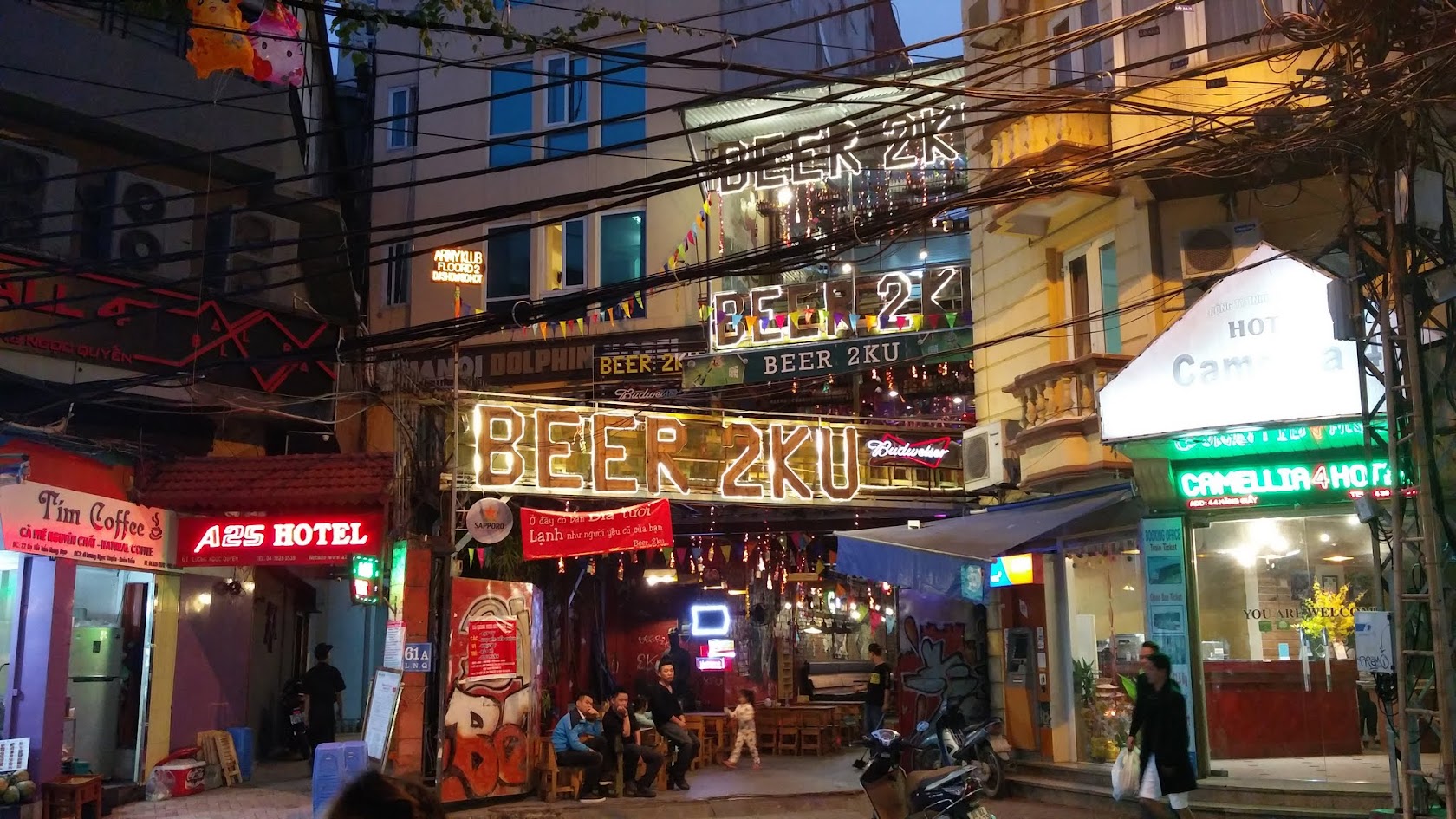 Their way of life can be very simple 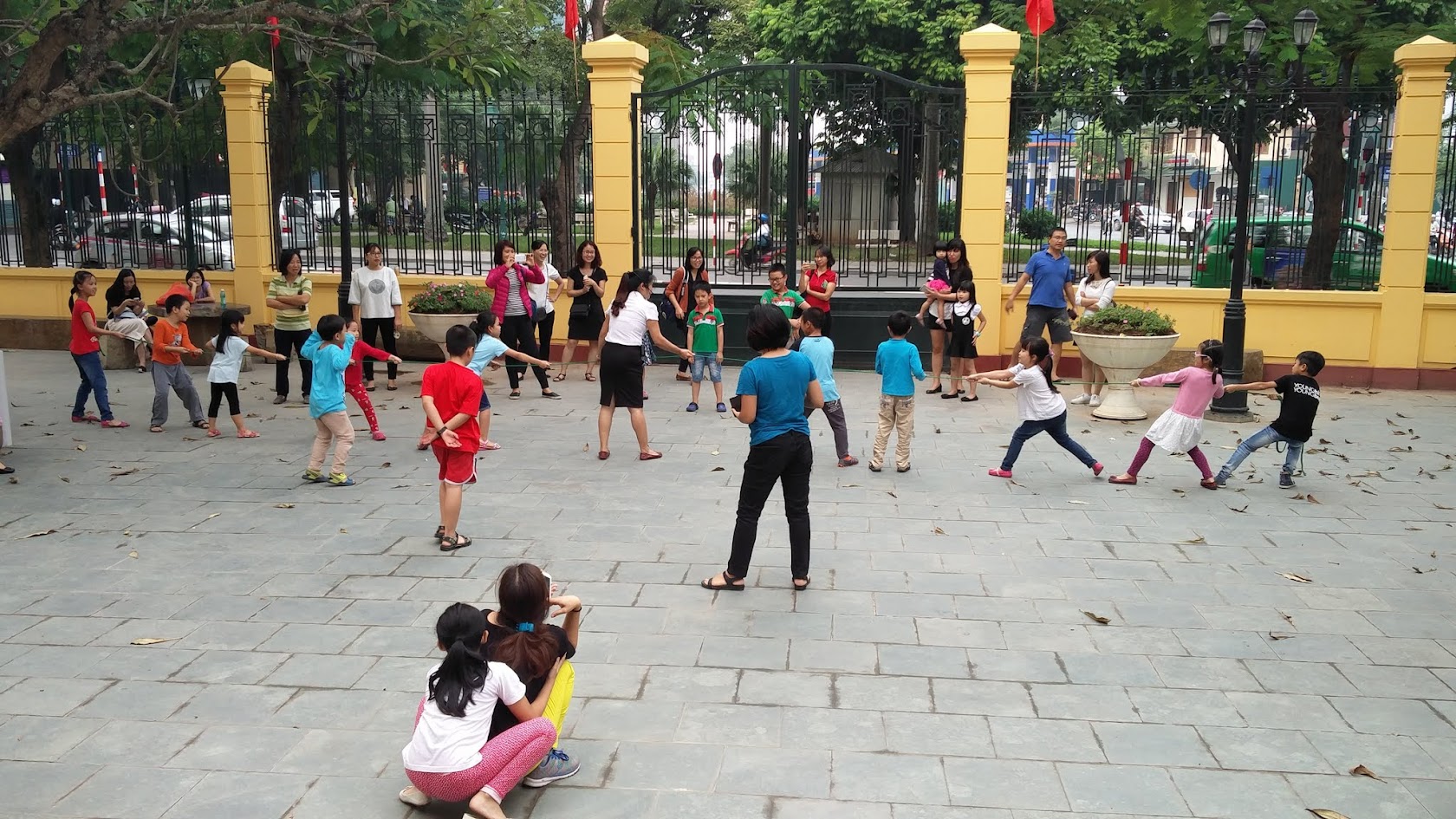 Let’s cut some hair on the side of the street. 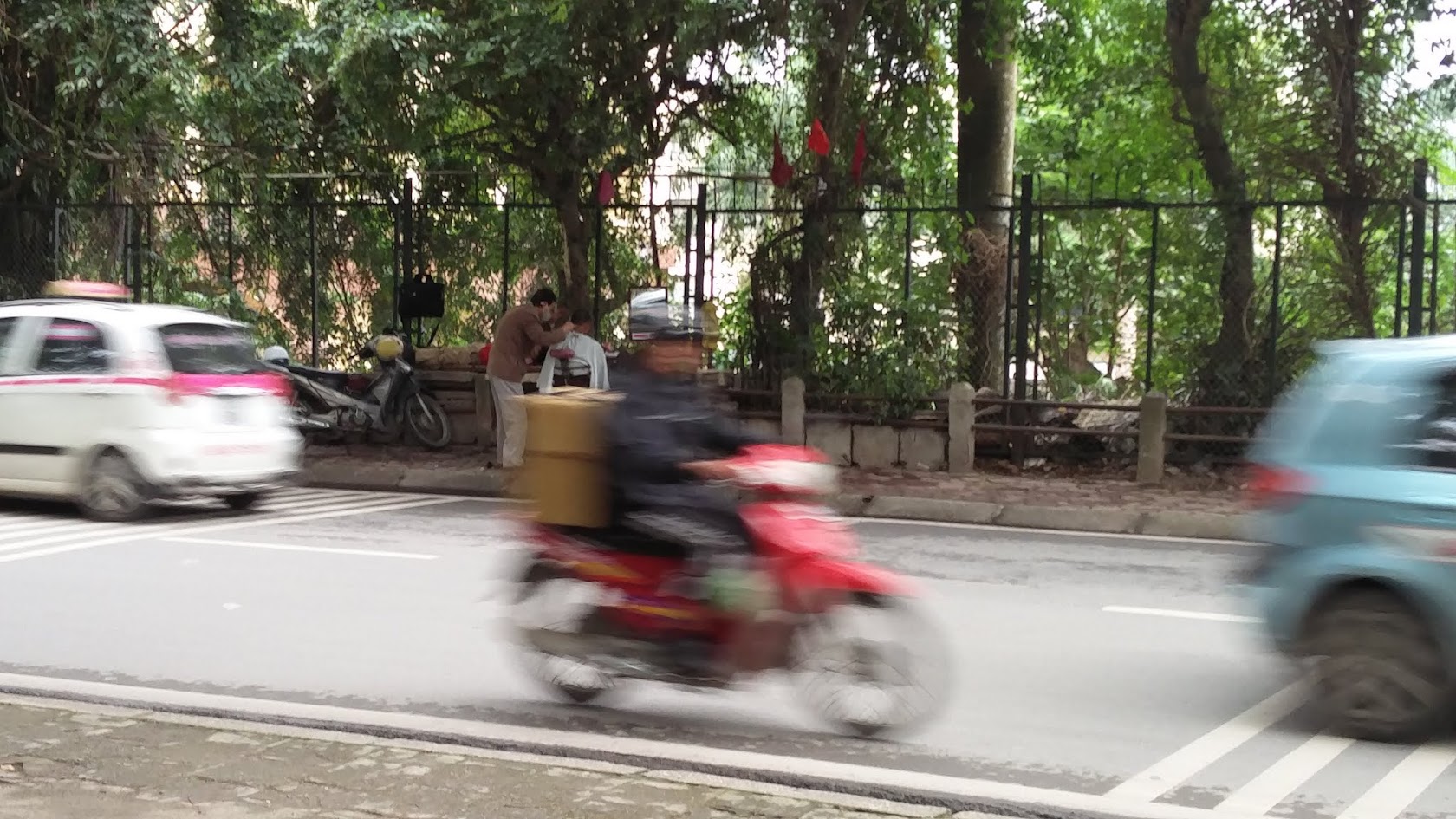 This is a country where for so much of their history, they were conquered by someone: China, France, Japan, etc. The French left behind some of their architecture too. 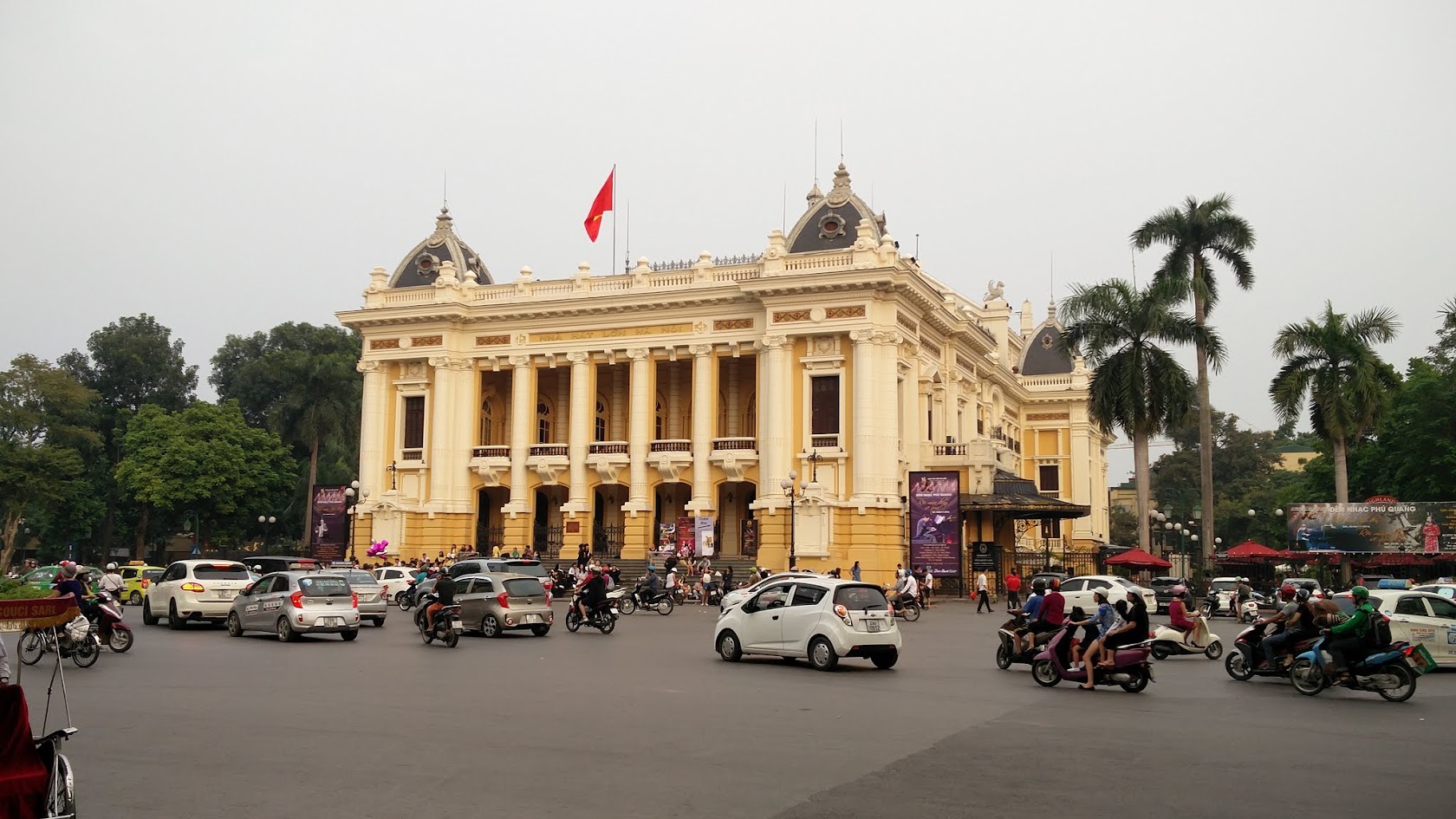 Since Vietnam is a communist country, of course there has to be a statue of Lenin. 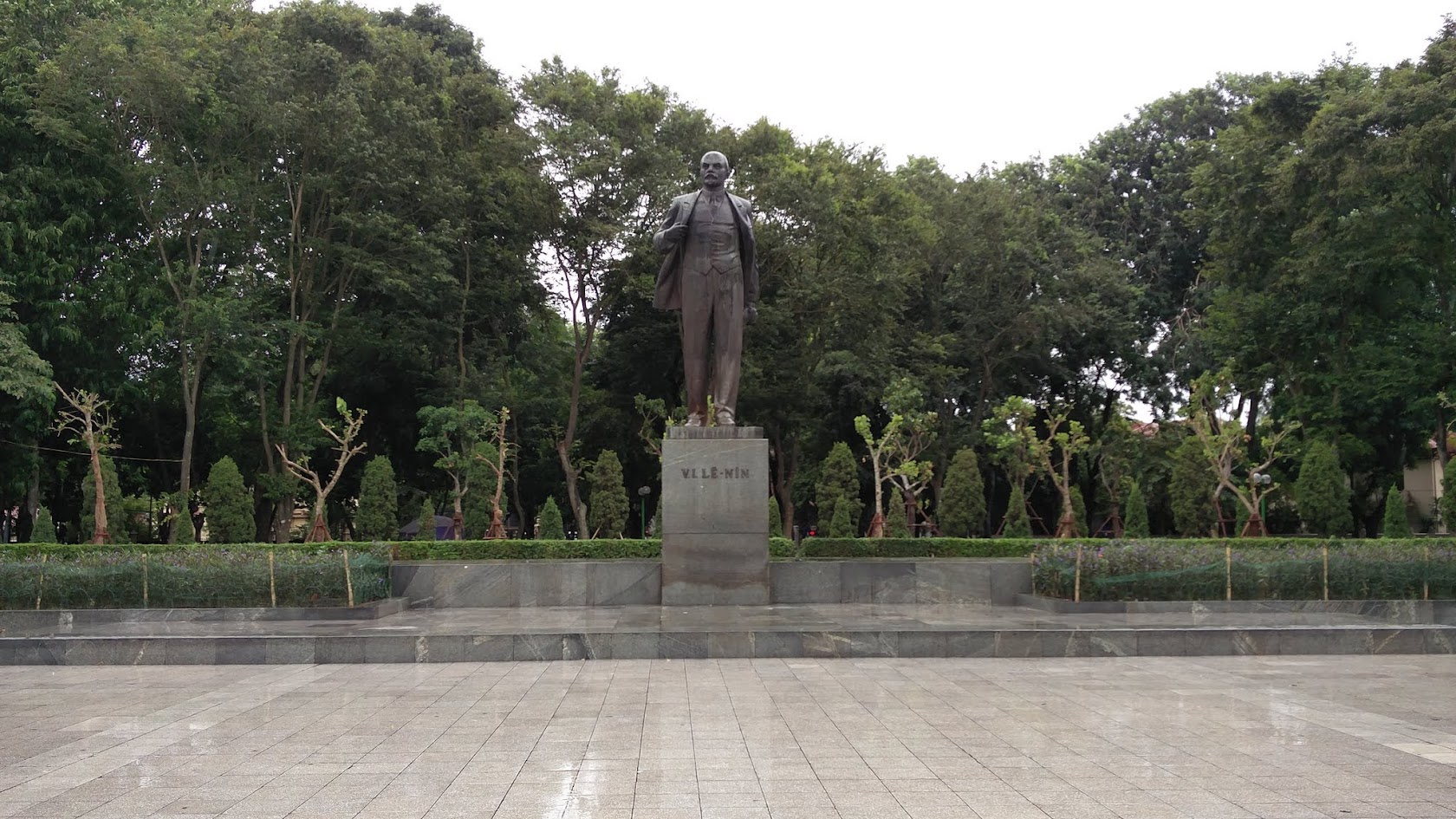 There was also an influence from Confucianism here. Enough for there to be a Confucian temple, which is also the site of the Imperial Academy, the first national university of Vietnam. 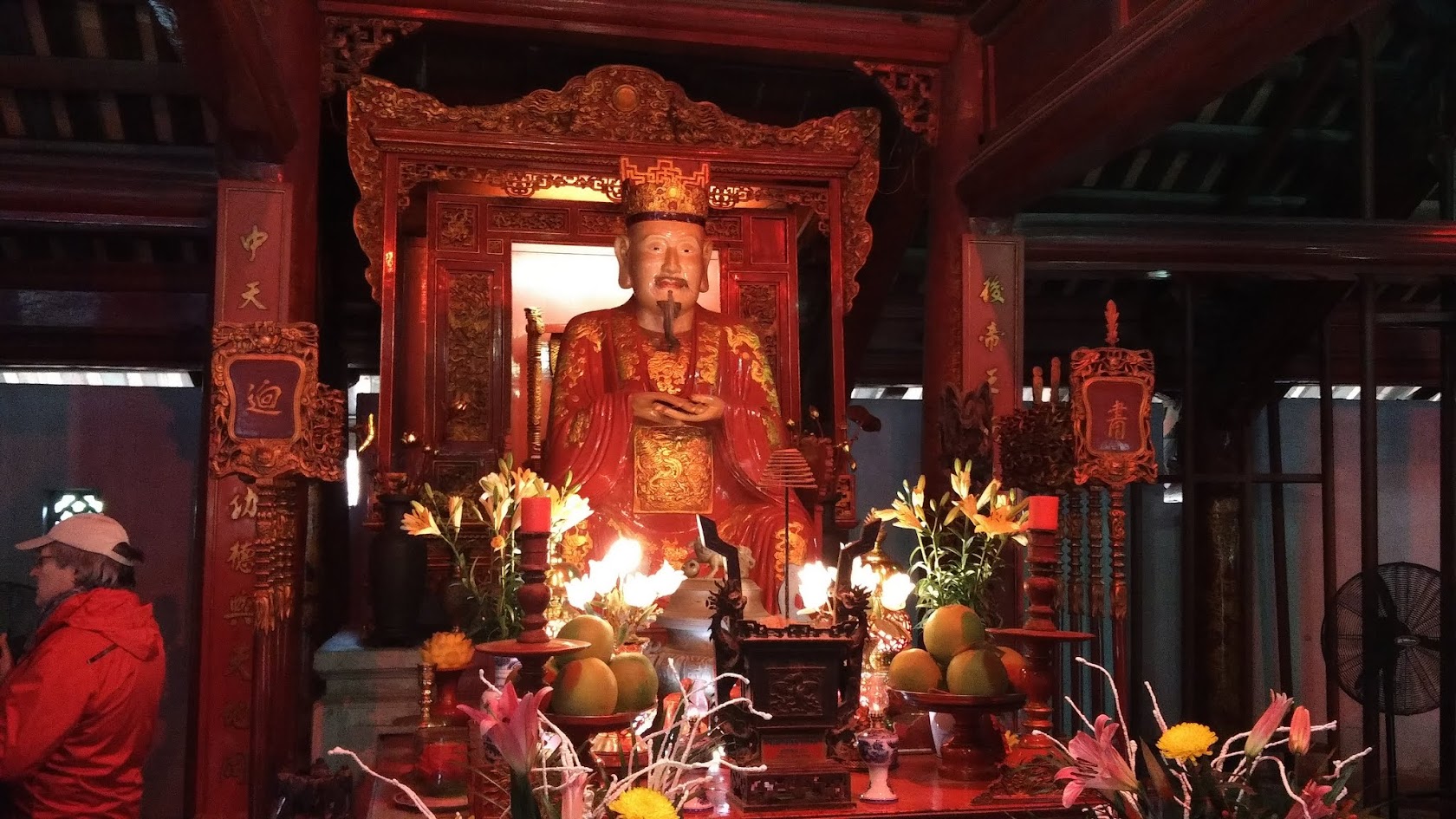 How fitting that when we were there, there were groups of students posing for pictures for graduation. 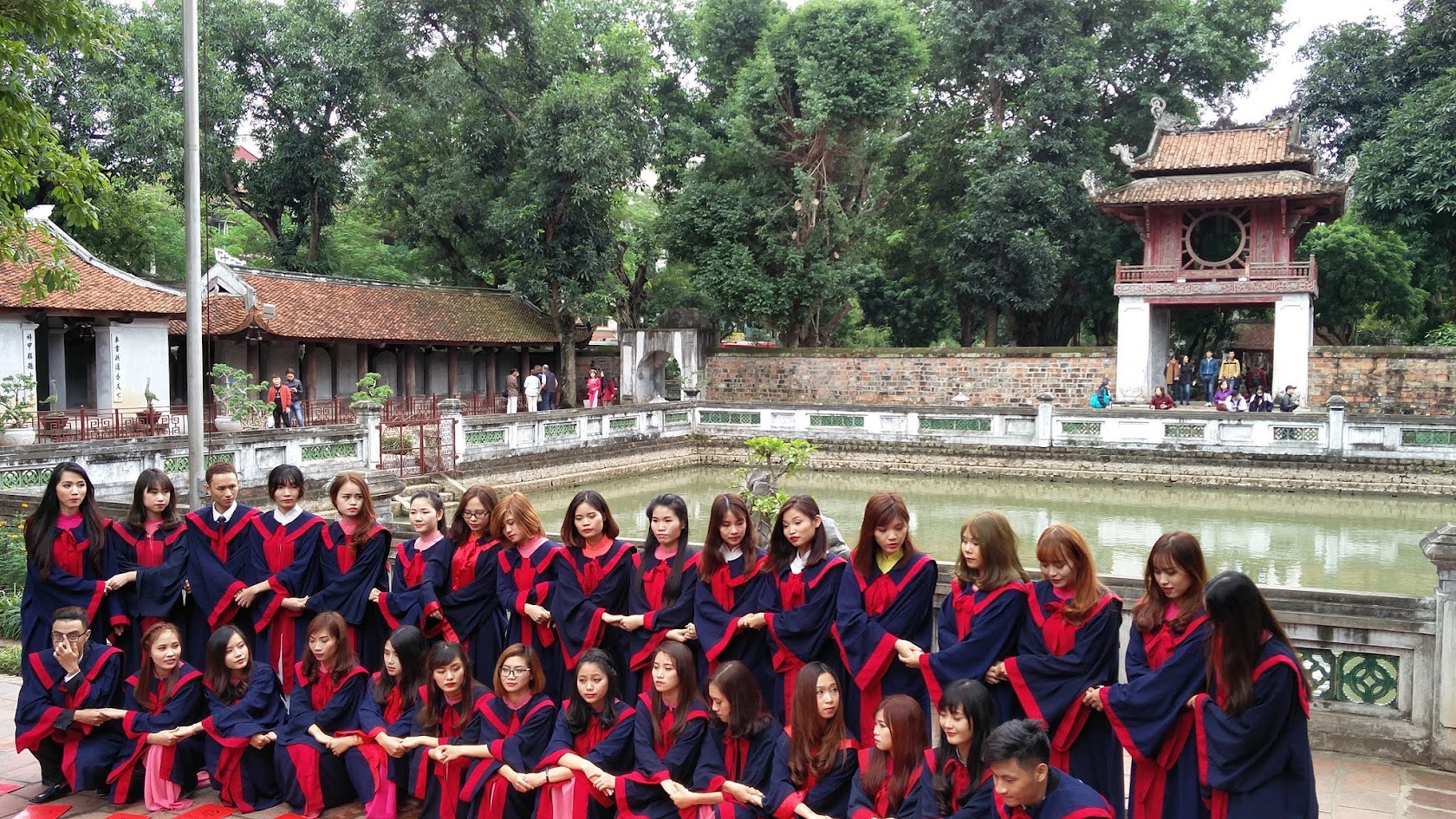 From going to museums there, they are really happy about finally having their own country back again. There were so many exhibits about their triumphs against the colonialists, against the Japanese, and eventually against the Americans. They even claim that the Americans fabricated the Gulf of Tonkin Incident as an excuse to fight in Vietnam. That could very well have been true, but everything just seemed super biased. During the war, the North Vietnamese shot down a B-52, which they proudly display. 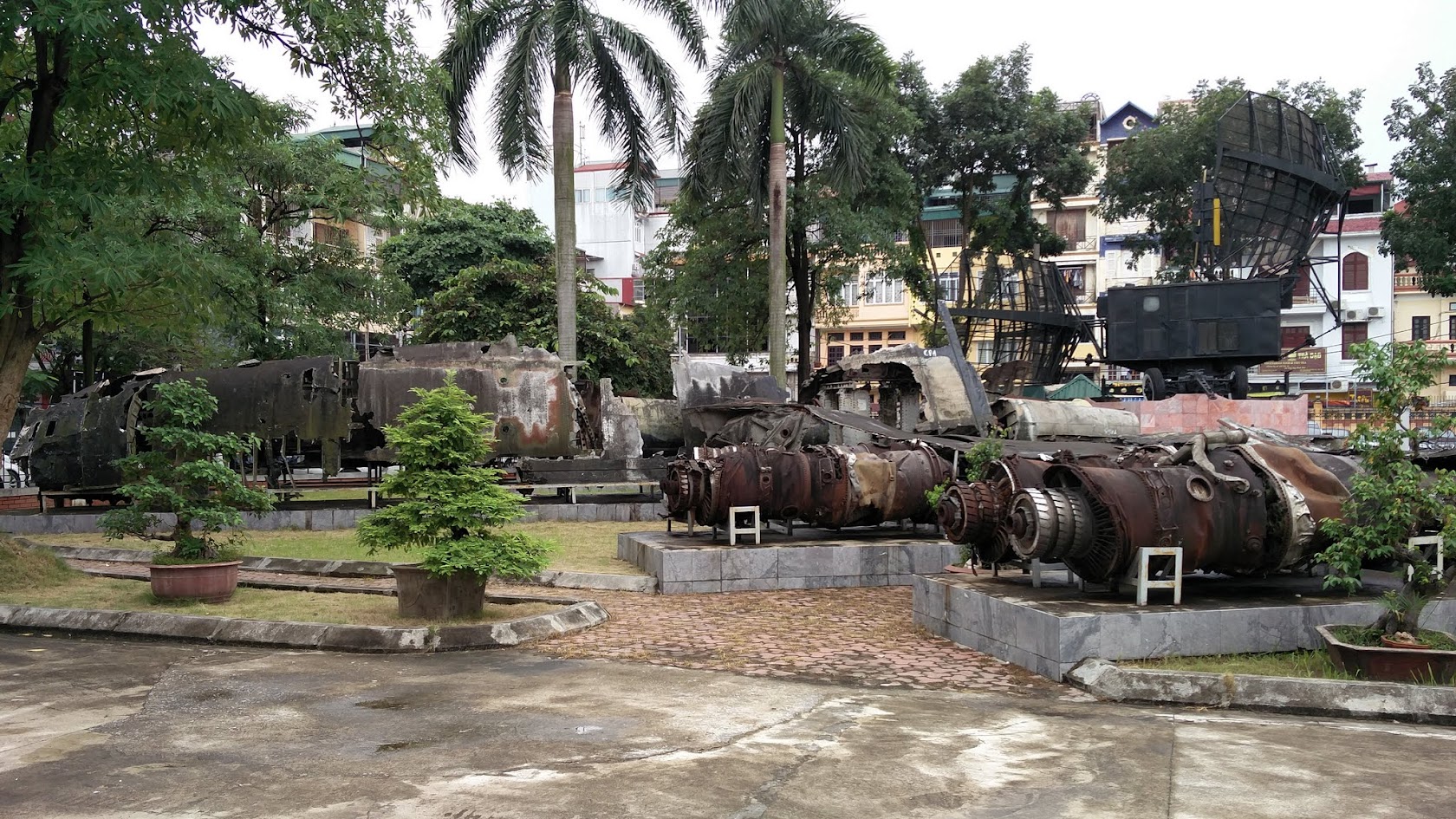 There’s even a bit of a B-52 in the water where it crashed. The buidings in the back are also super narrow, which was because buildings were taxed on their width (not sure if this is still the case though). 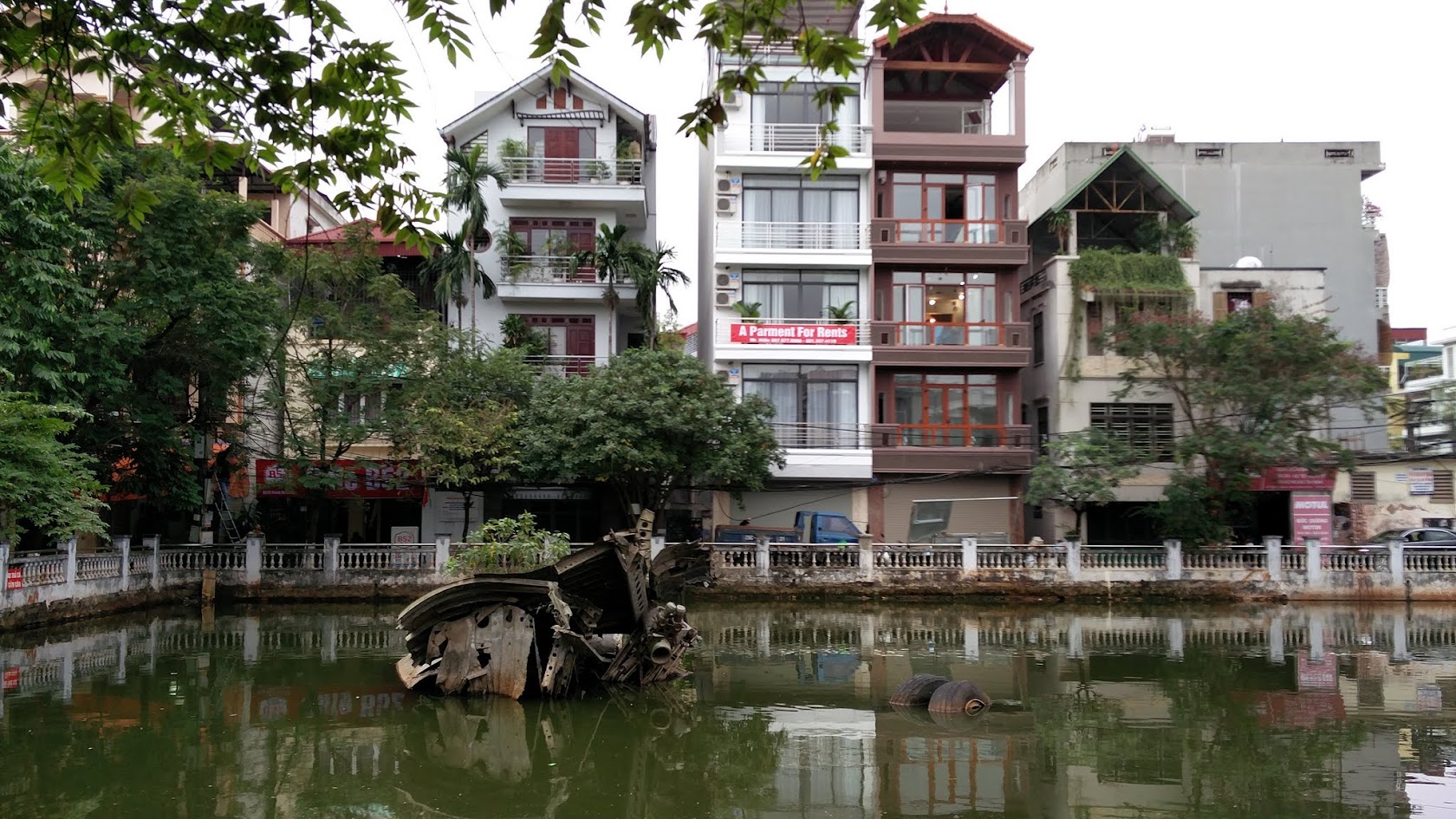 They also like to point out all the terrible things that their French conquerors did to them at the Prison Museum. 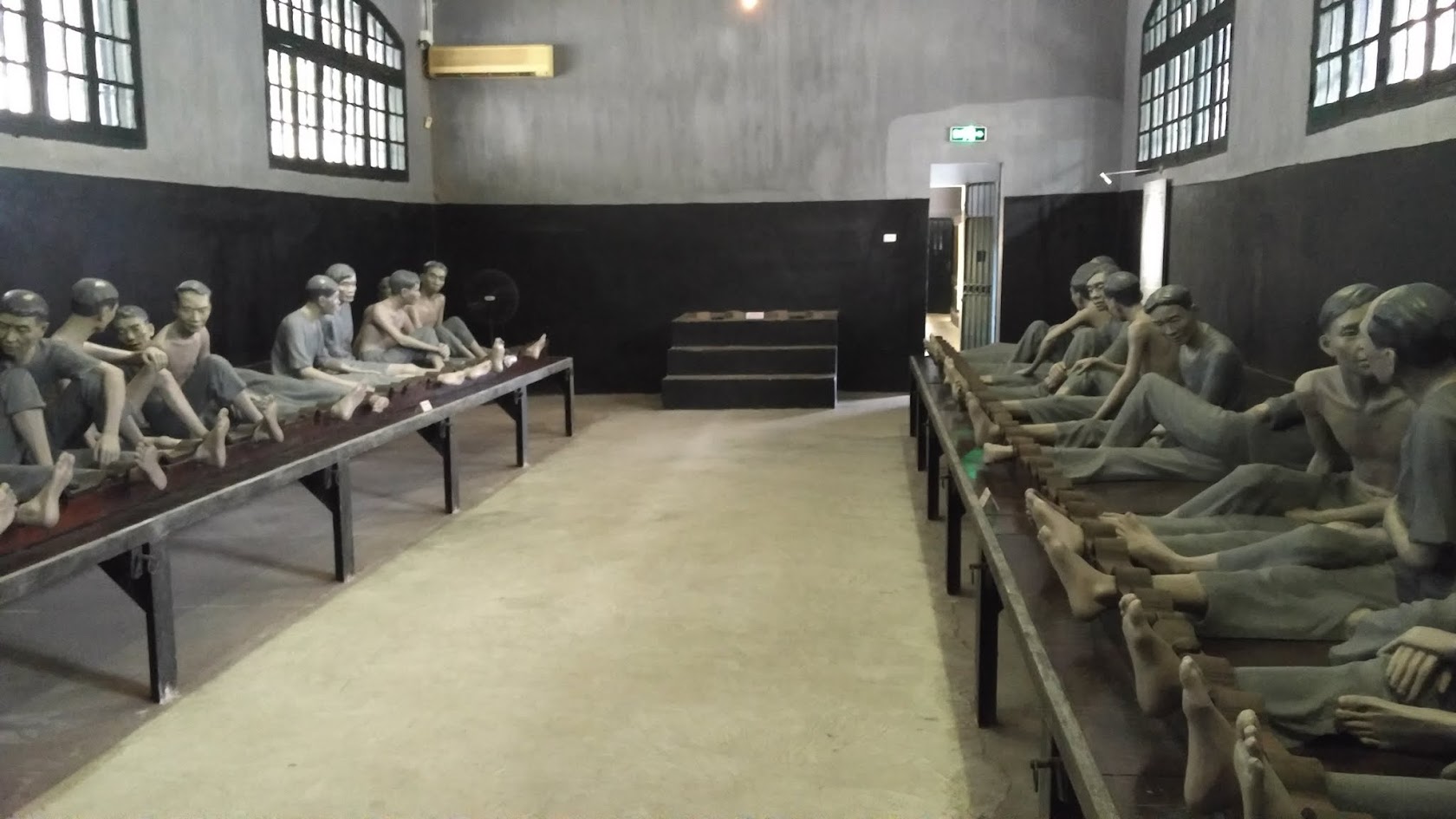 The body of Ho Chi Minh is preserved and displayed in the mausoleum. When we were there though, his body had been transported to Russia for some work, and so it wasn’t on display. 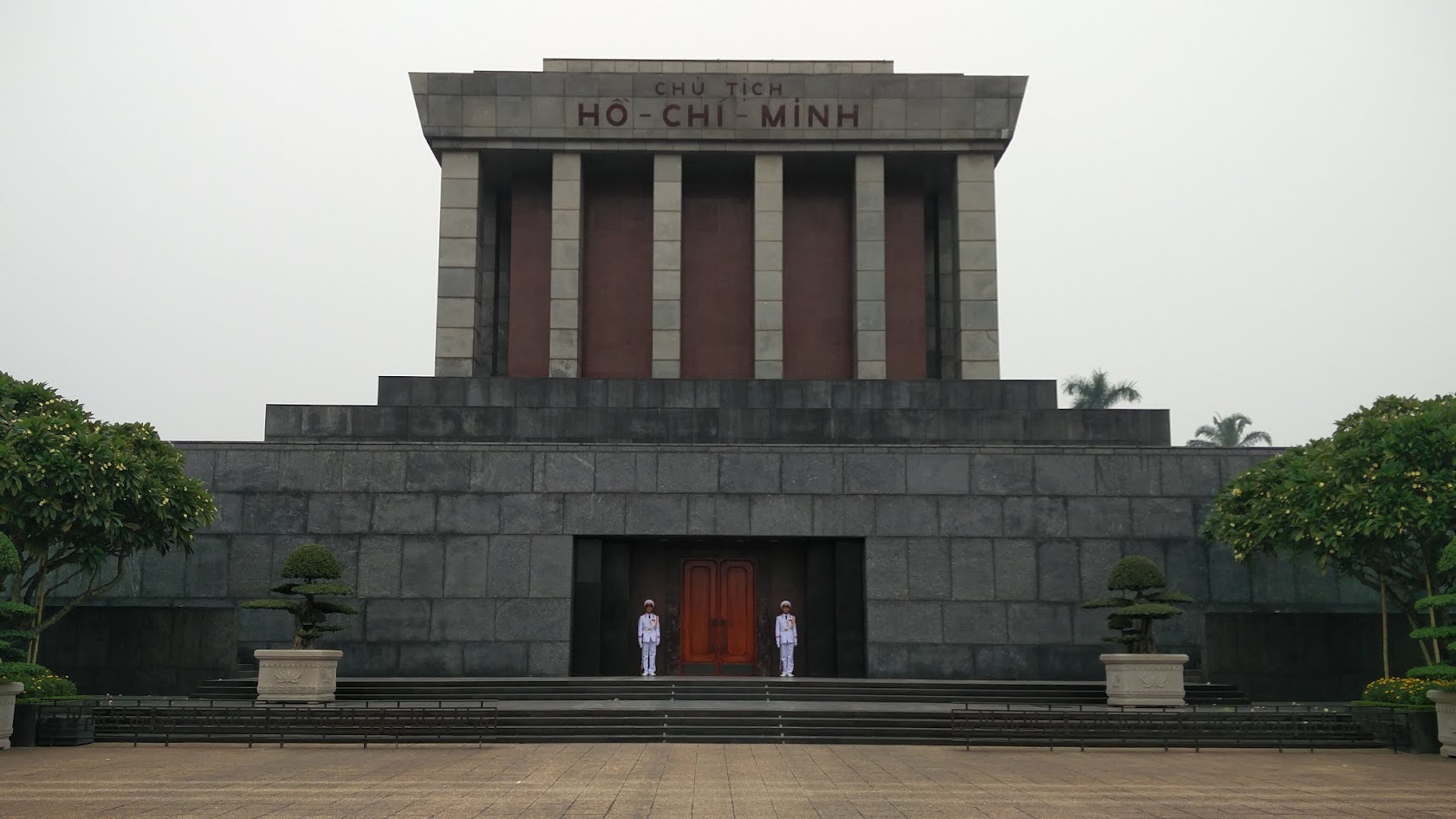 At their military museum, they went on about how they fought a war against American imperialism and showed off the weapons they used. And of course, every time I see a tank, I think “cuz baby you’re a firreeeworkkkkk” and drinking margaritas. 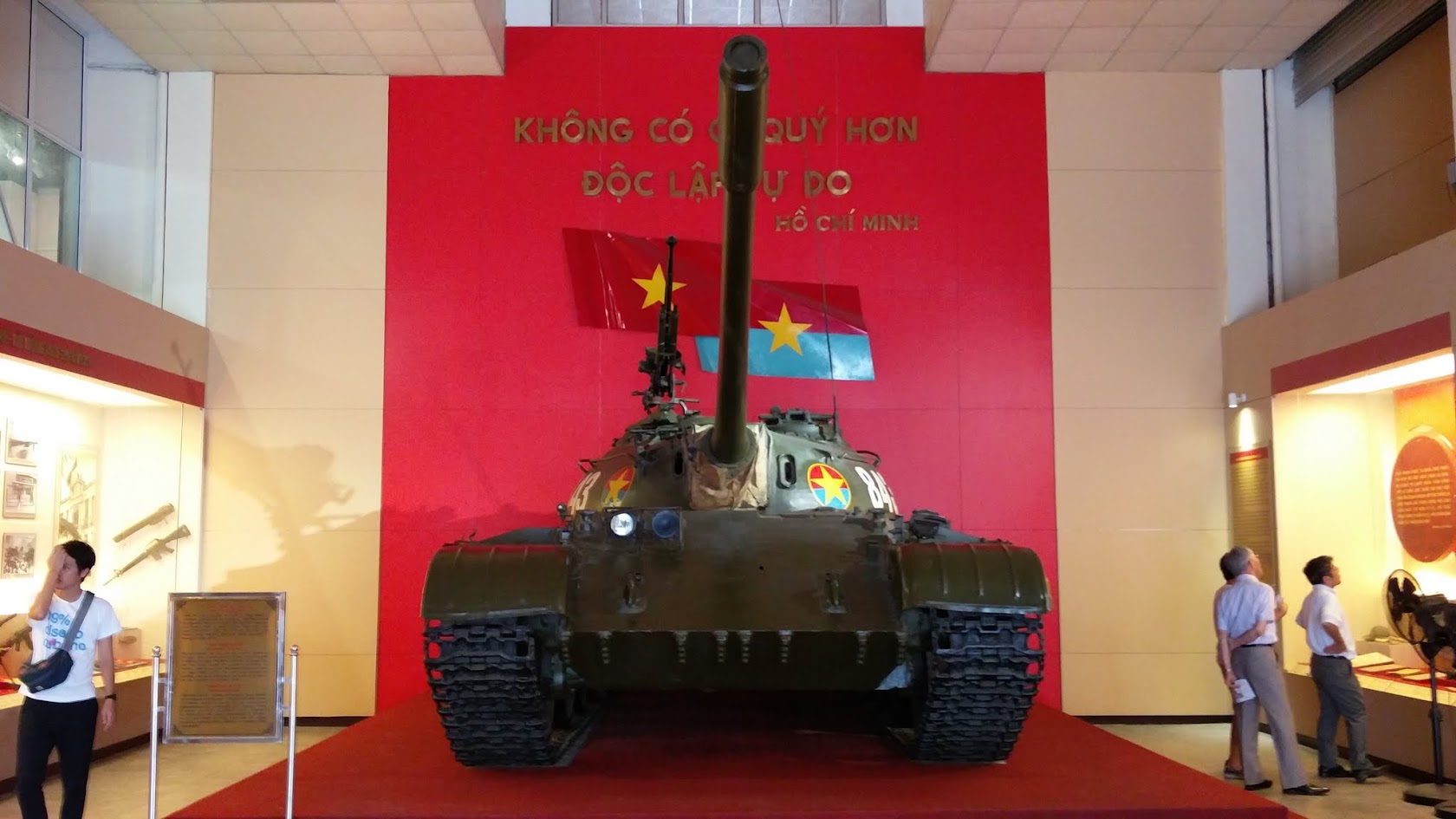 I think that sums up the visit to Hanoi real good!